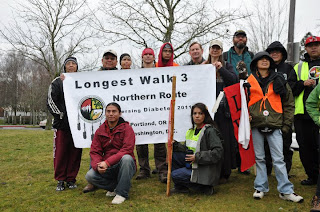 Northern route if off to Helena, and the southern route is in San Carlos Apache
Censored News
http://www.bsnorrell.blogspot.com
Photos: Long walk northern route in Oregon by Christina Akaquiqui. Quechan Preston Arrow-weed honors southern route walkers. Photo Preston Arrow-weed.
(MONDAY, March 7, 2011) Walkers and runners on the Longest Walk 3 for the Reversal of Diabetes are off speaking to students today, and then are off to Helena on the northern route. The southern route is on San Carlos Apache land in the White Mountains.
The northern route was in Missoula, Montana, on Sunday and enjoyed dinner at the Indian Center. Coordinator Chris Francisco said on Sunday night, "Ya'at'ee'h, The Indian Center in Missoula threw a nice dinner for us and gave us a chance to speak about our journey here. They are very nice and so cool. They will be cooking breakfast for us tomorrow morning also. Thank you for your support Missoula Indian Center and staff. Tomorrow we will get a chance to speak in class rooms again."
A Round Dance will be hel 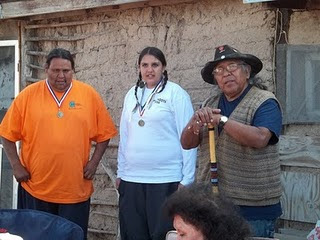 The southern route is now in San Carlos Apache land, after being hosted by Pascua Yaqui, and walking to San Xavier on Tohono O'odham land on Saturday. In White Mountain Apache, they will no doubt have some great food cooked by an Apache chef, who says she'll post her menu.
One of the southern route runners, sent this message, "We left Pasqua Yaqui. Lodge and deer dancing beautiful ceremony in my heart. We ran 110 miles. We are in White Mountain San Carlos rez. Winds at 25 miles. Should stay here one more day."
Thanks to all the walkers and runners!
at March 07, 2011