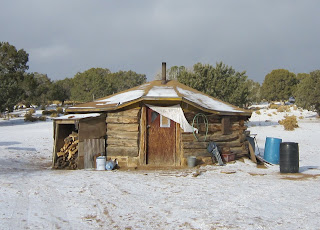 From Black Mesa Indigenous Support
Censored News
http://www.bsnorrell.blogspot.com
Photo Snowy Hogan Black Mesa Indigenous Support
Dear Regional Coordinators and other interested folks,
During the 2010 Caravan on Black Mesa we listened to the Elders and second generation resisters and we came up with a few action plans. In terms of a letter writing campaign, we are in the process of researching and asking for direction from Indigenous led organizations.
In the mean time are working on two projects: one, we are looking to raise funds and awareness for two different events. First is an event that would support Elders and second generation resisters from Black Mesa to travel to the UN to speak at the UN Permanent Forum on Indigenous Issues (UNFPII).
The other event would support Second generation resisters of relocation and large scale coal mining from Black Mesa to travel to Virginia to have a solidarity exchange with Mountain Justice activists and organizers also struggling against large scale coal mining.
The Mountain Justice crew is also planning on attending the UNFPII. The UN Permanent Forum on Indigenous Issues is an advisory body to the Economic and Social Council, with a mandate to discuss indigenous issues related to economic and social development, culture, the environment, education, health and human rights. (http://www.un.org/esa/socdev/unpfii/ )
According to its mandate, the Permanent Forum will:provide expert advice and recommendations on indigenous issues to the Council, as well as to programmes, funds and agencies of the United Nations, through the Council raise awareness and promote the integration and coordination of activities related to indigenous issues within the UN system prepare and disseminate information on indigenous issues.
The Black Mesa Mountain Justice Exchange The Black Mesa/ Mountain Justice Exchange project is an effort to strengthen the connections between Dine’ and Appalachian communities impacted by extreme and invasive coal extraction. Both Dine’ and Appalachian cultures are rooted in a connection between the land and human communities.
This connection is threatened by massive scale coal extraction that is stealing and poisoning water supplies, paralyzing each region economically, and dehumanizing the people by disrupting their place-based identity. We hope exploring the similarities and differences between the struggles will offer more potential for collaboration and support.
As communities in Appalachia have different experiences of racism and colonialism, there can be much to learn from Black Mesa residents’ resistance to settler colonialism, in addition to corporate exploitation.
There is much to be learned from the visibility and coverage of mountain top removal as well as Mountain Justice’s coalition across a diversity of communities in a large region.
The ecological and economic impacts of extraction are often mentioned, but this project seeks to emphasize its cultural consequences. This project approaches extraction as more than just a facet of the global industrial economy. Instead it intends to illuminate and amplify the root causes of the problem- extraction as a mindset, a way of being in relation to land that is abusive and detrimental to all life.
We see fundamental change to this entrenched mindset as essential to abolishing extremely exploitative practices such as strip mining and mountaintop removal for coal.
We seek this fundamental change through honoring the identity of land-based cultures, such as in Appalachia and Black Mesa.
Our hope for this project is that bringing representatives of these two regions together will be another step in articulating a lasting cultural answer to problem of extractive economies that poison water, denude landscapes, and impoverish people of both regions.
We also see this as an opportunity to exchange skills and strategies between two communities who have developed their own approaches to organizing in resistance to industrial exploitation. The initial project of this work is for each group of people to meet each other in their home communities.
Our goal is to have a delegation of Dine’ people to visit Appalachia in May or June and to continue learning about each other’s approach to and understanding of the issue.
The purpose of each visit is to not only build long-term relationships, but to share practical skills and strategies useful to protecting the land and water in the short-term.
We hope that these initial visits build a foundation for an on-going and collaborative relationship in which both regions‘ efforts for sovereignty are strengthened.We look forward to hearing your thoughts about this exchange and collaborating with you on this endeavour.
In love and resistance, The BMIS Collective: Tree, Liza, Derek, Berkely, Dixie & Hallie
http://www.blackmesais.org/
-----------------------------------------------------------------------------
Comment from Michelle Cook, Navajo:
"Throughout the planet grass root communities struggle to protect their
land and resources from unsustainable extractive industries. This is
certainly the case for many Indigenous and Appalachian communities in
regards to coal mining and mountain top removal.
The need to create dialogue and solidarity within and between the
Mountain Justice Movement and Indigenous peoples is important for both
communities have and are vulnerable to industry and greed; both
communities have visions of building sustainable economies, and both
are fighting to protect what they love, their land, air, and water."
Posted by Censored News, publisher Brenda Norrell at March 02, 2011