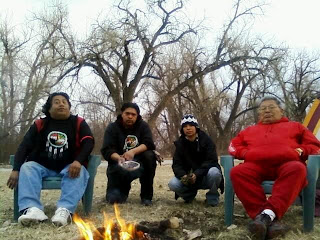 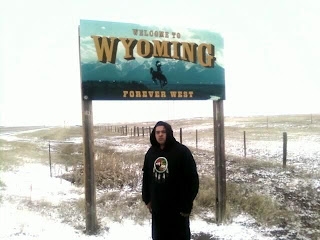 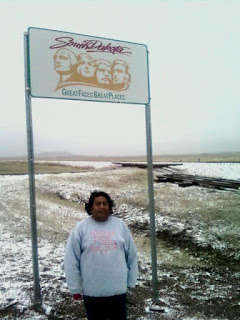 Long Walk 3 northern route for reversal of diabetes, was briefly in Wyoming, and then at the South Dakota border. Earlier, Northern Cheyenne youths from Lame Deer, Montana, ran with them to Ashland, Montana.
On Saturday, March 26, 2011, northern route coordinator Chris Francisco said, "We are in Rapid City now and the Cheyenne people were great. Especially the kids. They ran from the Little Big Horn Battle Field to Lame Deer."
Photo 1: Long Walk 3 in Lodge Grass, Montana, near Crow Nation: Manny Jim, Carl Bad Bear Sampson, Lisa Peake and Paul Owns the Sabre. Thank you Carl Bad Bear Sampson, Western Shoshone, for the cellphone photos to Censored News!
The Long Walk 3 southern route left Mountaineer, New Mexico, for Vaughn, N.M., on Friday.
Best to all the walkers from Censored News.
at March 25, 2011 No comments:

Also on YouTube: The illegal theft by the Hearst Corporation of the Black Hills
http://www.youtube.com/watch?v=0ZrdXlIJSPg

UNITED NATIVE AMERICANS DEMAND REPARATIONS AND ACCOUNTABILITY From the Hearst Corporation for CONTINUING VIOLATIONS OF THE FORT LARAMIE TREATY'S OF 1851 AND 1868
FOR IMMEDIATE RELEASE :
RALLY TO DEMAND REPARATIONS AND ACCOUNTABILITY FOR THE
ILLEGAL THEFT OF THE BLACK HILLS AND THE HOMESTAKE GOLD MINE
FRIDAY, MARCH 25, 2011 8:00 AM - 3:00 PM, PRESS CONFERENCE 12:00 PM - 1:00 PM
SATURDAY, MARCH 26, 2011 8:00 AM - 3:00 PM
SPEAKERS AT HEARST CASTLE - 750 HEARST CASTLE ROAD, SAN SIMEON, CA. 93452
SPONSORED BY: UNITED NATIVE AMERICANS INC. (U.N.A.)
United Native Americans invites members of the press and community to join us, to both attend and participate in our rally to demand Justice for The Lakota Nation.
In the Spirit of Crazy Horse, U.N.A. is demanding the Hearst Corporation contribute to the struggling Lakota Nation whom they have stolen land and precious natural resources from. Professor Lehman Brightman states that the Hearst Corporation “has never tried to make amends to the Lakota Sioux Nation.” The heir to the Hearst fortune, William Randolph Hearst III. has“not given one red cent to the Sioux Indians. They could easily afford to set up a scholarship program or improve dilapidated housing on Sioux Territory.” Nearly 97% of the Sioux Nation’s population lives below Federal poverty levels.
The United States government and the Hearst Corporation can be prosecuted for violation of International Law. Article VI. of the United States Constitution states “ All treaties made, or which shall be made ... Shall be the Supreme Law of the Land.
U.N.A. believes it is time that punitive damages be paid to the Lakota Sioux Nation for direct violation of the Fort Laramie Treaty’s of both 1851 and 1868.
Reparations need to happen to heal the wounds that capitalism has inflicted upon the people the mainstream media indicates are the least important: indigenous communities, people of color, children, people in poverty, disabled people, migrants, elders, and mothers. Daily newspapers are the media through which we consume ideas about what to do and who to be, and tell stories to make us understand where we come from. These newspapers, like the Hearst-owned SF Examiner,
tell us stories about what sort of ideal human we should all strive to be. The problem is, most media in wide circulation has been taken over by corporate interests, and ignores atrocities against folks who need their land back, like the Lakota people of the Black Hills, because indigenous folks, we are told, are not the ideal humans we all want to be.
“Very few people know about these facts,” says Quanah Brightman, a Lakota/Sioux leader of the U.N.A.
Manipulations of the media is a strategy that individualizes, like the Hearsts have used throughout history, and now indigenous people are turning the tables with their own people-led media at the Hearst Castle this weekend.
Please join U.N.A. for our educational and peaceful protest to demand Justice for the Lakota Sioux Nation at the gates of the Hearst Castle on Friday, March 25th and Saturday, March 26th, from 8:00 AM to 3:00 PM.
750 Hearst Castle Rd. San Simeon, CA 93452
For more information find us on Facebook.com
at March 25, 2011 1 comment: 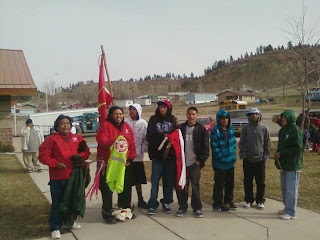