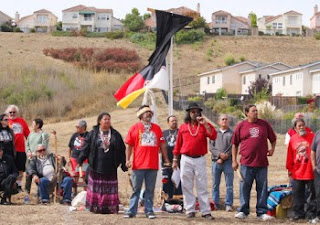 ALL WARRIORS FOR THE ANCESTORS:
Action alert (Updated on April 13, 2011)
Glen Cove Calif. action alert - April 15, 2011
April 14-15th Call to Assemble
ALL WARRIORS FOR THE ANCESTORS:
The Protect Glen Cove Committee and the Board of Directors of Sacred Sites
Protection and Rights of Indigenous Tribes (SSP&RIT) have received
information that leads us to believe that the desecration of Glen Cove
could begin on April 15, 2011.
We are calling for an ASSEMBLY of all Warriors to gather at 5:00pm on
April 14, 2011 at Glen Cove. Please arrive by 7:00pm at the latest, if you
would like to attend the community meeting.
The following morning (Friday, April 15th) at 8:00am, SSP&RIT will host a
PRAYER CEREMONY to honor the ancestors at this sacred place and to protest
this hate crime. Traditional drums welcomed.
Be prepared to actively protest this assault at Glen Cove. Cameras and
video cameras are a must, if you have them. Walkie-talkies are needed for
communications. Bring you cell phone chargers.
Bring you sacred medicine and join our prayer circle at Glen Cove. If you
can’t make the trip, please make a phone call and keep the phone lines of
GVRD and the City of Vallejo busy. (see numbers below)
ALL WARRIORS WHO WILL ANSWER THIS CALL: This is a NON-VIOLENT and PEACEFUL
protest. NO WEAPONS, NO DRUGS, NO ALCOHOL!
Reminder: All frontline supporters who have not registered are urged to
send their e-mail and cell phone # to: secretary.ssp_rit [at] yahoo.com
for updates and more information, please visit:
http://protectglencove.org/
April 7th UPDATE:
GVRD and contractors were meeting at Sogorea Te today (April 7). They
refused to listen to our concerns, refused to identify themselves or their
employers and tried to harass and intimidate SSP&RIT members and their
supporters. The police were called by Steve Pesley of GVRD, but no arrests
or interference resulted. Representatives of the Times Herald were on hand
and interviewed Wounded Knee.
The contractors intend to fence the ancestors in to protect their
equipment. The also intend to employ roving security at the site. We
expect that this fence will go up on the 13th or 14th of April.
The contractor is Carone & Company, Inc. Make a call and voice your
objections to them:
(925) 602-8800
5009 Forni Drive, Concord, CA 94520
DONATIONS REQUESTED
We are now requesting donations for an Emergency Defense Fund. Funds are
needed to purchase supplies, food, photocopies, sanitation, signs, etc.
Please contribute if you can!
Donations can be made online with a credit/debit card or a bank account,
and will be processed securely. To donate, visit:
https://www.wepay.com/donate/137138
Numbers to call:
Greater Vallejo Recreation Department: 707-648-4600
City of Vallejo Mayor: 707-648-4377
Vallejo Times-Herald newspaper: 707-644-1141
Times-Herald fax number: 707-643-0128
Carone & Company, Inc. (contractors): (925) 602-8800
for updates and more information, please visit:
http://protectglencove.org/

Sacred Sites Protection and Rights of indigenous tribes
Contact: Wounded Knee (707) 373-7195; Corrina Gould (510) 575-8408
Bradley Angel (415) 722-5270
AS Bulldozers may be arriving any day at the glen cove burial and shell mound site,
native americans to file civil rights complaint with the state of california against greater vallejo recreation district and city of vallejo

Vallejo, CA – Faced with the possible imminent arrival of bulldozers at the Glen Cove ancient burial site, Native Americans will file an administrative civil rights complaint on April 13, 2011 with the State of California against the Greater Vallejo Recreation District and the City of Vallejo. A press conference will be held in front of Vallejo City Hall, 555 Santa Clara Street, on Wednesday, April 13, 2011 at noon.
Sacred Site Protection and Rights of Indigenous Tribes (SSP&RIT) is filing the complaint under California Government Code § 11135 alleging that the City and GVRD are discriminating on the basis of race in threatening to destroy and desecrate significant parts of the Glen Cove Shellmound and burial site, for harming Native Americans’ religious and spiritual well-being, and effectively excluding Native Americans from their right to full participation in the decision-making regarding this project.
The Glen Cove Shell Mound is a well-documented and culturally significant site located in Vallejo, California, and spans an area of fifteen acres along the Carquinez Strait. It is the final resting place of many Indigenous People dating back more than 3,500 years, and has served as a traditional meeting place for dozens of California Indian tribes. The site continues to be spiritually important to California tribes. The Glen Cove site is acknowledged by GVRD and the City to have many burials and to be an important cultural site, yet they are moving forward as early as this week with plans to build a toilet and parking lot on this sacred site and to grade a hill that likely contains human remains and important cultural artifacts. Native Americans and their supporters have vowed to protest any effort that could desecrate the sacred burial site.
Native Americans are a class of people protected from unlawful discrimination in state-funded activities and programs. Intentional discrimination against minority populations is prohibited under Cal. Gov. Code § 11135(a). As recipients of state funding, GVRD and the City are subject to this law and cannot violate the civil rights of Native Americans.
In addition, SSP&RIT will announce more details about plans to protect Glen Cove from desecration.
"Everyone has the right to a final resting place. Our ancestors deserve to have a resting place on their original land without the threat of being removed for the sake of a park,” said Corrina Gould, Ohlone resident of the Bay Area. “Other countries realize the significance of ancestors and honor the ancient cemeteries by not disturbing them. Who does it ultimately serve to complete this project? Let our ancestors rest."
at April 08, 2011 No comments:

Contacts: Lori Goodman, Diné CARE - (970) 259-0199
David Graham-Caso, Sierra Club - (213) 387-6528 x214
Karen Hevel-Mingo, National Parks Conservation Association - (801) 521-0785
Mike Eisenfeld, San Juan Citizens Alliance - (505) 325-6724
Jeremy Nichols, Climate/Energy Program Director, WildEarth Guardians – (303) 573-4898 x 1303
Pollution Plan for San Juan Coal Plant Woefully Inadequate
Groups: PNM profits should not dirty our air
Press statement
Albuquerque (NM) – The skies over the four corners region and the public’s right to clean, healthy air would continue to be sacrificed by a recent utility-sponsored proposal for the San Juan Generating Station near Farmington, said a coalition of clean air advocates today.
Lori Goodman with Diné CARE, an environmental organization on the Navajo Reservation, said the plan being pushed by PNM, the majority owner of the coal-burning plant, is nothing more than a cheap air filter, and delays real improvements in cleaning up the region’s dirty air.
Just last year the American Lung Association gave San Juan County, New Mexico an overall “F” rating for air quality.
The EPA‘s proposal requires the plant be retrofitted with new, up-to-date pollution controls to reduce the plant’s nitrogen oxides by more than 80 percent. PNM’s proposal to the State of New Mexico would reduce such emissions by only 20 percent.
“The utility-sponsored plan is like putting new tires on a beat up ‘72 Chevy with no brakes, lights or exhaust and calling it safe,” said Goodman. “PNM is simply trying to get by on the cheap at the expense of everyone’s health. It’s inexcusable.”
The EPA proposal supersedes the PNM proposal to the state because it is part of Clean Air Act requirements meant to reduce regional haze by cutting nitrogen oxides and other pollutants. The rule applies to existing dirty coal plants and other old industrial sources, and calls for the installation of selective catalytic reduction technology, or SCR, as the most efficient and effective way to meet pollution safeguards and protect Class I airsheds, including national parks and wilderness areas.
Nitrogen oxides are dangerous air pollutants that impact lung functions and cause respiratory diseases. They also are a key chemical in the formation of equally dangerous ozone pollution. San Juan County is already on the brink of violating ozone pollution levels designed to protect public health.
A report by the Clean Air Task Force attributes air pollution from the San Juan Generating Station responsible for $250 million of health impacts in New Mexico alone.
"Pollution from PNM's dirty coal plant has harmed people for decades and this pathetic proposal does next to nothing to protect public health,"said Bill Corcoran, the Western Region Director for the Sierra Club's Beyond Coal Campaign.  "The time and money PNM has spent opposing pollution protections at San Juan would be better spent putting people to work by investing in New Mexico's abundant clean energy options."
The New Mexico Environment Department concluded in a study that the San Juan Generating Station is responsible for approximately 80 percent of the air quality impairment at Mesa Verde National Park in southwestern Colorado. National Parks Conservation Association agrees that the pollution upgrades are absolutely necessary to protect the region’s national parks from emissions coming out of the area’s old out-of-date coal power plants.
“More than 30 years ago Congress decided that the amazing views at pristine parks and wilderness areas were worth protecting for our children and grandchildren,” said Karen Hevel-Mingo with the National Parks Conservation Association. “We support EPA doing its job and fulfilling the legal duty to enforce the regional haze program so park polluters are responsible for reducing their share of visibility impairing emissions.”
In addition to the wide gap between the different emissions reduction proposals, the utility is dramatically over-estimating the costs of installing SCR, claiming a price tag of upwards of $1 billion dollars, far greater than EPA’s estimate of just under $250 million.
“They’re simply trying to scare their customers in order to avoid making the needed investment to clean up the plant,” said Mike Eisenfeld, of the San Juan Citizens Alliance. “What everyone should really be scared about is this dirty air my kids are forced to breathe and the dirty skies over our national parks.”
Eisenfeld added that the utilities should not be allowed to continue using the Four Corners region as their dumping ground, particularly since the area is verging on non-attainment for ozone where economic ramifications could be severe.
“Protecting public health has to be a priority,” he said. “This just shows that coal isn’t cheap.”
The EPA is required to rule on the proposed upgrade in June. More information can be found at:http://1.usa.gov/edRKGA
PNM’s 2009 statement on Environmental Policy and Leadership can be found at:http://www.pnm.com/environment/policy_leadership.htm:
at April 08, 2011 No comments:

Photos of Long Walk 3 northern route for the reversal of diabetes, on Pine Ridge and Rosebud Indian lands in South Dakota. Photos by Chris Francisco LW3.
On Thursday, April 7, 2011, Long Walk 3 northern route coordinator Chris Francisco said from South Dakota, "Made it to Eagle Butte. I hope you are all doing fine. We'll be resting here for another day. We walked in with the community and had dinner with the people. Tribal chairman came out to speak. Thank you Eagle Butte for you hospitality."
On Friday, the southern route was in Concho, Oklahoma, with the Cheyenne Arapaho. Walkers hosted the Concho, Oklahoma Reversing Diabetes Mini-summit.
at April 08, 2011 No comments: