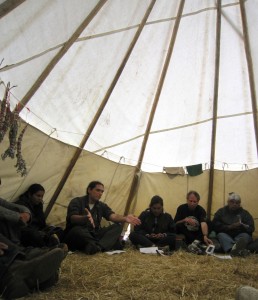 Days 45-47: On Saturday the 28th, a know your rights and legal observation training was held on the land, hosted by attorneys from the National Lawyers Guild. Later in the day, Mark Anquoe and Morning Star Gali of the International Indian Treaty Council held a 3 hour workshop and discussion at Sogorea Te, focused on the UN Declaration on the Rights of Indigenous Peoples. The discussion expanded to the topic of colonialism and how laws on various levels have shaped and enabled the continuing oppression of indigenous peoples. Treaty Council representatives explained that, significantly, the UN Declaration does not include any wording about “federally recognized” VS “unrecognized” tribes (such as the Ohlone), because “the power to define is the power to destroy”.
http://www.protectglencove.org/

AIM in Caracas to support Venezuela after US imposes new economic sanctions
American Indian Movement representatives Tony Gonzales and Richard La Fortune were in Caracas to thank CITGO for energy assistance to American Indians and other poor Americans, after the Obama administration imposed new economic sanctions on Venezuela, including CITGO's parent company.
Read article:
http://bsnorrell.blogspot.com/2011/05/aim-in-caracas-supporting-venezuela-as.html
at June 04, 2011 No comments:

Here's the top six ways that the United States and Canada, as revealed by Wikileaks, has worked against the rights of Indigenous Peoples, by engaging in espionage and the promotion of mining, while violating Indigenous autonomy, self determination and dignity.
1. The United States worked behind the scenes to fight the adoption of the Declaration on the Rights of Indigenous Peoples. In Ecuador, the US established a program to dissuade Ecuador from supporting the Declaration. In Iceland, the US Embassy said Iceland's support was an "impediment" to US/Iceland relations at the UN. In Canada, the US said the US and Canada agreed the Declaration was headed for a "train wreck."
2. The United States targeted and tracked Indigenous Peoples, community activists and leaders, especially in Chile, Peru and Ecuador. A cable reveals the US Embassy in Lima, Peru, identified Indigenous activists and tracked the involvement of Bolivian President Evo Morales, Venezuelan President Hugo Chavez, Bolivia Ambassador Pablo Solon, prominent Mapuche and Quechua activists and community leaders. President Chavez and President Morales were consistently watched, and their actions analyzed. Indigenous activists opposing the dirty Tar Sands were spied on, and other Indigenous activists in Vancouver, prior to the Olympics.
3. The United States was part of a five country coalition to promote mining and fight against Indigenous activists in Peru. A core group of diplomats from U.S., Canada, U.K., Australia, Switzerland and South Africa formed an alliance with mining companies to promote and protect mining interests globally. In other illegal corporate profiteering, Peru’s government secretly admitted that 70-90 percent of its mahogany exports were illegally felled, according to a US embassy cable revealed by Wikileaks. Lowe's and Home Depot sell the lumber.

4. Canada spied on Mohawks using illegal wiretaps. Before Wikileaks hit the headlines, it exposed in 2010 that Canada used unauthorized wiretaps on Mohawks.
Wikileaks: "During the preliminary inquiry to Shawn Brant's trial, it came out that the Ontario Provincial Police, headed by Commissioner Julian Fantino, had been using wiretaps on more than a dozen different Mohawks without a judge's authorization, an action almost unheard of recent history in Canada."
4. The United States and Canada tracked Mohawks. In one of the largest collections of cables released so far that targeted Native people and named names, the US Consulates in Montreal and Toronto detailed Mohawk activities at the border and in their communities.
5. The arrogant and insulting tone of the US Embassies and disrespect for Indigenous leaders is pervasive in US diplomatic cables. The US Embassy in Guatemala stated that President of Guatemala, Álvaro Colom, called Rigoberta Menchu a "fabrication" of an anthropologist and made other accusations. Menchu responded on a local radio station that Colom was a "liar."
6. The collection of DNA and other data, makes it clear that US Ambassadors are spies abroad. US Secretary of State Hillary Clinton states that the Intelligence Community relies on biographical information from US diplomats. In cables to Africa and Paraguay, Clinton asked US Embassy personnel to collect address books, e-mail passwords, fingerprints, iris scans and DNA.
“The intelligence community relies on State reporting officers for much of the biographical information collected worldwide," Clinton said in a cable on April 16, 2009. Clinton said the biographical data should be sent to the INR (Bureau of Intelligence and Research) for dissemination to the Intelligence Community.
The cables, the aftermath
As for reactions, Mohawks are unimpressed with the cables and have little to say about either the content or the arrogant tone of the US Embassy.
John Kane, Mohawk host of the radio show Let's Talk Native Pride, said, "I think one of the reasons you haven't got much response from this is just as you have suggested; it's no surprise. While some would be outraged to be treated this way or spoken of in such terms, we know what we are up against. We also know that 9-11 was an opportunity for both the US and Canada to put Native resistance on par with terrorism. No Department of Homeland Security or PATRIOT Act or Canadian Border Service or joint task force of US and Canadian alphabet soup will change the disposition of Mohawk Warriors."
The US and Canada have tried to play word games to make people believe the two countries have now supported the Declaration on the Rights of Indigenous Peoples.
When the United Nations adopted the Declaration on the Rights of Indigenous Peoples, four countries voted against it: the US, Canada, Australia and New Zealand. Although the four countries eventually took action on it, the US and Canada gave only lip service and included language in an attempt to prevent the Declaration from being used in federal courts to ensure rights, including the right of free, prior and informed consent and the right to ancestral territories.
Indigenous rights were the focus as tens of thousands of Indigenous Peoples and grassroots people met in Cochabamba, Bolivia, and then Cancun, Mexico, to establish new climate standards for the protection of Mother Earth in 2010. Globally, efforts have increased to expose the scam of carbon credits, protect water rights and to protect forests, rivers and oceans.
Wikileaks exposure of the race for Arctic oil by numerous countries, has led to new efforts to protect the homeland of the Inuit.
During the last week of May 2011, the American Indian Movement was in Venezuela to support President Hugo Chavez. AIM thanked CITGO for heating assistance for poor families, as the US imposed new economic sanctions on Venezuela. Anishinabe First Nation Chief Terrance Nelson released a statement questioning if the US is targeting Chavez as its next "bogeyman."
Chief Nelson also said that for Native people in the US and Canada, economic sanctions from the colonial governments are nothing new.
"As indigenous peoples in North America, our experience with the colonial governments has been continuous undeclared economic sanctions enacted against our people," Chief Nelson said.

﻿
The Migrant Trail: We Walk for Life

The precarious reality of our borderlands calls us to walk. We are a spiritually diverse, multi-cultural group who walk together on a journey of peace to remember people, friends and family who have died, others who have crossed, and people who continue to come. We bear witness to the tragedy of death and of the inhumanity in our midst. Lastly, we walk as a community, in defiance of the borders that attempt to divide us, committed to working together for the human dignity of all peoples.

Tucson- The eighth annual Migrant Trail, a 75- mile walk from Sásabe, Sonora will arrive in Tucson, Arizona on Sunday, June 5th. The event will culminate in a press conference, followed by a community gathering at Kennedy Park.
Sixty participants who have made the seven-day trek have traveled from México, Canada and more than ten states throughout the United States; they represent diverse international communities that include Peru, Germany and Brazil.
For the eighth year, a diverse international group of friends and allies has gathered to walk the Migrant Trail though the Altar Valley in the Sonora Desert, along the most heavily traveled migration route where the vast majority of human remains are recovered. Sponsored by a coalition of local and national organizations, the Walk bears witness to the thousands of women, men and children who have lost their lives in an attempt to provide a better future for themselves and their families.
Arizona continues to draw national and international attention for its anti-immigrant and xenophobic policies like SB 1070 (the "Papers, Please" law), attacks on Ethnic Studies, and the terrorization of local communities by local police collaboration with immigration enforcement officials.
The ongoing human rights crisis of deaths along the border is only another piece of the larger strategy to funnel vulnerable migrants into Arizona's deadly desert. Participants of the Migrant Trail walk not only bear witness to the tragedy of death, but the intentional dehumanization and militarization of border communities.
Organizers and participants call for an end to the brutal and irresponsible policies that cause the deaths of thousands of workers in our borderlands. We call for U.S. immigration, labor and trade policies that reunite families, and recognize the human dignity and the vital contributions of our immigrant brothers and sisters. This is the human rights challenge that continues to face our communities.
The Migrant Trail Walk will begin the final 6.7 miles of their journey at 7:45am at the BLM campsite on Ajo Way and San Joaquin Road. Participants will be welcomed home at Ramada #3 at Kennedy Park with speakers, music, food, and testimonies from participants and supporters. This event is free and open to the public.
.
The Migrant Trail
c/o Arizona Border Rights Foundation
P.O. Box 1286 Tucson, AZ 85702
Tel: 520.770.1373
migrant_trail@yahoo.com
http://www.derechoshumanosaz.net/
at June 04, 2011 No comments: