The Renegades Walking for Diabetes

﻿ ﻿
.
.
They call themselves, "The Renegades, Walkers for Diabetes." (Photo 4) Standing: Manny Jim Calapoo, Warm Springs Shoshone/Paiute/Yakama; Carl Bad Bear Sampson, Western Shoshone, and Paul Owns the Sabre, Cheyenne River Lakota elder, photographed at a wolf sanctuary near Brookville, Indiana. They are walking 500 miles to DC.
The video is Paul Owns the Sabre, followed by John Redhouse, on the original 1978 Longest Walk! Paul was on the Longest Walk 1978, Longest Walk 2 in 2008 and many other walks.
Reach the Renegades Walkers for Diabetes, at Manny's cell 605-848-0508.
Censored News supports all the walkers on all the routes, long walkers, water walkers and migrant trail walkers for life.
Thanks to Manny and Carl, and Carl's father, for sending cellphone photos to Censored News!
UPDATE June 6, 2011: Carl 'Bad Bear' Sampson, near Columbus, Ohio on June 6, remembered the good people and places on this journey. "Traditional ways and ceremonies can only move forward in life, and never back," he said in a message to his friends.
Paul Owns the Sabre called and said he was stepping aside and letting the young ones lead for the rest of the way. He will be in New York until the end of the walk, and if Creator wills, will meet the group in DC. He said his time being with the wolves was a good send off. But he will step aside now and let the others finish up, carrying the staff to DC. "You should have heard those wolves howling at night, all 30 or 40 of them, that was something!" Paul said.
at June 06, 2011 No comments:

UPDATE: Attackers in the Nevada hate crime talked about the attack on Facebook on May 24. Reno Sparks Indian Johnny Bonta was beaten with a crowbar and baseball bats and stabbed during the attack and his son in law suffered a crushed elbow and broken hand.

Josh Janiszewski wrote: Just layed the fists and boots to some 6' 5'' tongan dude. what you got on little guys? May 24 at 3:13pm

When asked if they gave them hell, Josh responded.

Dee Cassell, the mother of Jacob Cassell, responded. Dee is the wife of a retired Lyon County Sheriff's officer. She asked about 'Jake:'

Dee Cassell Better have ur asses at home after I did 1st aid. Don't piss off women - they r worse than men! May 24 at 8:00pm

When asked by another person on Facebook if they got "some good licks" in Josh responded.

A Reno Sparks Indian man, Johnny Bonta, and his family were attacked by neo nazi skinheads at a Fernley, Nevada, convenience store, east of Reno, on May 24, 2011. Family members were beaten with a crowbar and baseball bats, and stabbed. Listen as Lisa Bonta, Johnny's wife, describes how the three white attackers broke Bonta's nose with a crowbar and knocked him out with a baseball bat. They tried to slit his throat and cut off his braid.
Lisa's son-in-law was beaten and suffered a shattered elbow and broken hand. The Bonta's daughter was threatened with rape. The victim, Johnny Bonta, was then arrested because of the white assailants connection with police. One of the attackers is the son of a retired Lyon County Sheriff officer.
Bonta was denied medical treatment in jail. When the family called the jail, they were told that Bonta "would have to get his Indian doctor" if he wanted to be treated. Bonta was eventually released because no charges were filed.
The convenience store clerk said there is a video which shows the attackers jumping out of the vehicle with baseball bats. The police would not reveal where the family car was towed to, with their documents in it.
Bonta was eventually released from jail because charges were not filed against him.
Fernley is a bordertown located between the Indian Nations of Pyramid Lake Paiute and Fallon.
Now the question remains if the US Justice Department will investigate the case, which includes police imprisoning the victim of a hate crime.
The Bonta family was live on First Voices Indigenous Radio in New York, with Cheyenne River Lakota host Tiokasin Ghosthorse, on WBAI FM New York and broadcast nationwide and on the web, on Thursday, June 9, 2010. 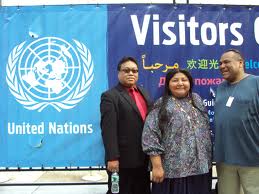 Councilman Tao Etpison: “We must all remember that here in Arizona, water is the primary issue in connection with use or occupation of lands. The Mining Bill would allow the mega copper company to use huge amounts of water to extract copper one mile deep."

Chairman Rambler concludes, “I would like to thank the members of the San Carlos Apache Tribal Council, the Inter-Tribal Council of Arizona, the National Congress of American Indians and other national organizations for their continued support in opposing the proposed Southeast Arizona Land Exchange Bill. You are all in our prayers.”
at June 06, 2011 No comments: