ST. MICHAELS, Ariz. -- (March 15, 2012) The Navajo Nation Human Rights Commission finally received the United Nations response from the Chairperson of the Committee on the Elimination of Racial Discrimination around 5 p.m., today. NNHRC articulated reasons why Navajo human rights were violated by Arizona Snowbowl to the United Nations committee in September 2011.

The United Nations CERD chairperson highlighting their previous request of the United States to respond to another indigenous human rights violation, he requested “… about the process by [which the United States of America used] to obtain the free, prior and informed consent of indigenous peoples with regard to the [Arizona Snowbowl].”

This is the second international body’s response to the Navajo Nation’s effort about concerns relating to Navajo human rights violations regarding the project to provide artificial snow using reclaimed water on Dook’o’o’sliid (the San Francisco Peaks).

A longer version to this breaking news will be released tomorrow.
at March 15, 2012 No comments:

Lakota community stop an illegal mega-load caravan in the Eagle Nest District of the sovereign Pine Ridge Indian Reservation/Oglala Lakota Nation. Two semi-trucks, 229,155 pound, extra wide oil treater vessel cargo worth $1,259,593 each, were stopped for several hours in the town of Wanblee, South Dakota. The peaceful blockade ended when the Oglala Sioux Tribal police worried about shift change, violated direct orders from the tribal vice-president on hand and turned out in their riot gear to arrest five individuals with disorderly conduct in tribal court, one young warrior, two elders and two of whom were serving as press and media. The tribal Attorney General never gave the all clear for the trespassing TransCanada bound mega-load to be escorted safe passage to the State Troopers waiting at the Reservation boarder. The truck drivers said two more loads were delayed behind this initial load and this route was authorized to them by the State of South Dakota, TransCanada and their trucking companies hauling supplies for the Keystone XL Pipeline and Tar Sands operations in Canada. The truckers thanked us for hot mashed potatoes, hot chicken and home made bread. Said we can come to their house for thanksgiving, their not too sure if they want to come back to ours? Their words, not mine. - This is a Native Impact production. 2012 Native.Impact@gmail.com God Bless the Lakota Nation & Grandma Marie Randall.
at March 15, 2012 No comments: 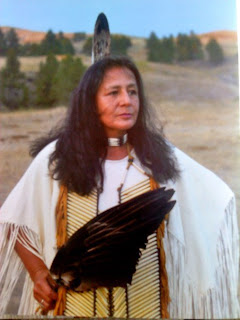 Listen to organizers of Left Forum,
including Debra White Plume:
First Voices Indigenous Radio today, Thurs., March 15, 2012, archive:
http://archive.wbai.org/
Date and Time:
Saturday, March 17, 2012
Conference participants come together to engage a wide range of critical perspectives on the world, to discuss differences, commonalities, and alternatives to current predicaments, and to share ideas for understanding and transforming the world.
www.leftforum.org
@ PACE University - New York, NY - Leftforum.org/Directions - Next to City Hall in New York City
3:00 pm -4:50 pm on Saturday the 17th
Room W615
Featuring: Debra White Plume (Lakota), Janene Yazzie-Collymore (Dine/Navajo), Kent Lebsock (Lakota), Tiokasin Ghosthorse (Lakota) and Sally Bermanzohn (Moderator)
PANEL: Examines the struggles of Indigenous peoples defending their lands, sources, seizure of land, expropriation, environmental degradation, exploitation, re-colonization and re-occupation. Participants discuss indigenous activism and the potential/ problems for unity with Occupy Wall Street. In what ways does the “Occupy” movements reinforce the structures of greed that Indigenous peoples stand against? What form would the movement have to take if it is reconciled with the realities behind the foundation of American exceptionalism and mobilizes against the continued rape of Mother Earth?
Janene Yazzie-Collymore Dine/ Navajo: An independent scholar and CEO of Sixth World Consultants, Janene works with her husband Kern Collymore on the Navajo Nation to help community chapters implement the Local Governance Act and pursue economic development in sustainable industries. While finishing her degree requirements in International Law with a concentration in Human Rights at Barnard College, Janene has also helped found a non-profit Indigenous Think Tank, Tecumseh Institute, in New York City. She is currently working with Owe Aku International Justice Project to help the organization get 501 (c) (3) status and daily continues down the path of her elders in Indigenous activism.
Debra White Plume Oglala Lakota author, artist, and activist from the Pine Ridge Homeland, has devoted her adult life to preserving her Lakota Way of Life, Treaty Rights and Human Rights. She works in all arenas, from the grassroots to the United Nations at Geneva and in NYC. Debra is the lead plaintiff against the uranium mining giant Cameco, Inc in its attempt to mine uranium 30 minutes from the southern border of the Pine Ridge. White Plume has engaged in sacred water protection for the past decade, and was recently arrested for trespassing at the White House in civil disobedience in order to raise the consciousness of America and President Obama to the threats posed by the Keystone XL oil pipeline against the drinking water of the Oglala Lakota Nation.
Tiokasin Ghosthorse is Mnicoujou, Itazipco and Oglala bands of the Lakota Nation. He spoke as a teenager at the UN in Lake Geneva and a life long-life Original Peoples activist. He has been involved and organized "occupations" in Lyle Point, Washington, Big Mountain, Arizona and Western Shoshone Defense Project, Crescent Valley, Nevada. He is a 20 yr. host of First Voices Indigenous Radio now heard on 41 stations internationally. He sits on a panel at Harvard University's Cultures On the Air. He has introduced dignitaries Pres. Evo Morales, Robert Kennedy Jr., and is presently working with Winona LaDuke to provide a truly "independent radio for an independent nation." He is a board member of several children's organizations that work with suicide, poverty, and Mother Earth cultural education through his musicianship. Ghosthorse is an author, university lecturer and scholar often presenting a dichotomous thinking process of Indigenous and non-Indigenous. He is a member of the Indigenous Think Tank, Tecumseh Institute, NYC.
Kent Lebsock or Tetuwan Okshila. He attended Boston University where he majored in International Relations. He has live in New York City since 1987 as an active member of the Native American community. Working at the American Indian Law Alliance since 1992, he became Executive Director of the Alliance in 2004. He has contributed to all aspects of its work on a local, national and international level. For example, beginning in 1992, Lebsock assisted the American Indian Community House in NYC with their HIV/AIDS Project, and helped to develop a prevention program culturally specific to Native American people. This work has contributed to international programs for health and environment consistent with an indigenous world view.
at March 15, 2012 No comments: