AIM-WEST, a non-profit human rights based organization in San Francisco, received notice from the United Nations Permanent Forum on Indigenous Issues (UNPFII) that it approved (7) delegate representatives to participate at the annual conference next month.   AIM-WEST anticipates (pending) approval to conduct a side-event, or workshop, during this year’s UN PFII entitled, “Doctrine of Discovery; A Question of Genocide”.  The workshop will review the history of genocide in the Americas and Pacific region, to the present crimes of genocide.  It will explore Indigenous peoples exclusion from the Convention on the Prevention and Punishment of the Crime of Genocide (1948) and its relevancy today in light of the recently adopted UN Declaration on the  Rights of Indigenous Peoples (DRIP).

The AIM-WEST side-event will utilize a study by UN Special Rapporteur Bartolome Clavero Salvador, entitled “International criminal law and the judicial defence of Indigenous peoples’ rights”, submitted to the UNPFII at its tenth session (E/C.19/2011/4), as a catalyst to explore and identify obstacles for recourse in terms of international criminal protection for Indigenous peoples.  A representative from the International Court of Justice (ICJ) and the International Criminal Court (ICC)are also expected to attend.  The format for the side-event will include presentations followed by discussion, question and answer.

In addition, AIM-WEST will host a reception Wednesday, May 9, 2012 at UN Church Building, 2nd Floor, 777 UN Plaza, from 6:15 to 9 pm (across from the UN).  The Invited guests, fellow NGO’s and Government representatives are called to acknowledge the 43 year anniversary of American Indian Movement (AIM), ten year anniversary and achievements of the Permanent Forum, including the DRIP, attention to death penalty and for political prisoners,  and Leonard Peltier “Walk for Human Rights”.  The evening includes a short screening of “Guatemala Vive!” with Q&A, and Silver Cloud Drum, and Song, snacks, and refreshments. 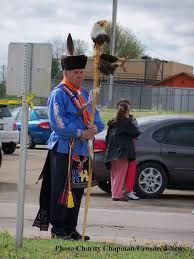 CUSHING, Okla. -- Protesters in Cushing, Oklahoma, were corralled with police tape, as President Obama made his coyote turn, and pushed for the Keystone XL pipeline in Cushing on Wednesday. The southern portion of the pipeline would cross the Red River, on the Oklahoma and Texas border which flows into Louisiana, and threaten the earth with the dirty crude oil from the tarsands in Alberta, Canada.
Obama's pro-pipeline talk was by invitation-only at a pipeline yard in Stillwater. Protesters were kept away.
Already, tarsands mining is devastating the homeland of the Cree and other First Nations in Alberta. Native Americans were arrested at the White House in September protesting the pipeline and tarsands.