“They like the pageantry, the colorfulness and the beat of that drum – they really like our beautiful culture -- but they don’t like us." -- Debra White Plume

By Brenda Norrell
Censored News
http://www.bsnorrell.blogspot.com
First in a series 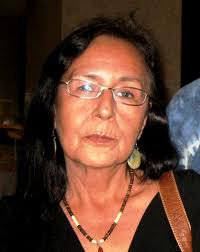 TUCSON -- Speaking at the Native Nations Water Rights Symposium, Debra White Plume, Lakota, said the Wasichu, the white men fat takers, depend on a way of life of selfishness and greed to continue mining and the rape of Mother Earth.


White Plume shared the essence of why the protection of the relatives is required for the continuance of humankind.

“For our people water is sacred. Through water there is life,” White Plume said, describing how Lakota are born into this world in the womb of water, arriving from the Star Nation. Then water is placed in the mouth of the newborn.

White Plume said Lakota know the dimension of responsibility to their relatives. Those relatives include the four-legged, winged ones and standing silent ones, which are the plants. “Everything that crawls and swims is a relative. Water is our relative, Mother Earth is our relative, and the Star Nation is our relative.”

“In the Lakota way, you protect your relatives.”

She said for Lakota, there is no line, like in the western world, between human beings and the environment.

Lakota asked the US Environmental Protection Agency, because it has the word “protection” in its name, “What are you protecting us from?”

They could not answer the question.

“With this philosophy of everything being related, there comes a time when you have to make a decision.”

“Do you stand by while your mother is being raped, abused and misused?”

No Native Nation person is going to stand there and let that happen.”

She said there are many ways to protect Mother Earth. These include becoming a scientist and  learning one’s ancient ways to protect those ways. Another way is to use the western system to stall a company, as Lakota have done in halting Cameco from beginning new uranium mining.

“In seven years, they haven’t turned a shovel,” she said of Cameco.

“We’re guided in our role of a protector,” she said, adding that it is both a duty and a privilege to answer that call.

She said all land is sacred, but some hold special significance, like Crow Butte, located near what is called Fort Robinson.

Crow Butte is where Crazy Horse went to seek a vision with his Pipe and to send his voice to the universe. It has long been a spiritual place for Lakota.

“Now we can’t go there anymore, because there is uranium mining there. It is against the law for us to go there.”

“The US has made laws to make it hard for us to live our way of life,” she said, adding that there are other places, including Bear Butte, where ceremonies continue.

She said the government believes that sources of energy are more important than the Lakota and their way of life.

“For them, getting that uranium is more important than our people having the right to live our way of life.” She said Lakota have used all means to fight the corporations, from the courts to the United Nation.

Then she told of the coming of a white man in heavy winter when there was deep snow. He was covered with hair.

In those early times, fat was tied in the trees in a bladder or stomach bag of the buffalo. Fat was a very valuable substance because there is no fat on buffalo, elk or deer, except for a little around the kidneys. The fat is used for medicine, a source of fire and a lubricant.

The starving white man came for the bundles of fat.

“He took them all, stuffed them all down his mouth.”

“We called him the fat taker. He thought only of himself. He didn’t think of the women who worked for five months to gather the fat so we would have it through the five months of winter.”

“He took it all for himself.”

She said in those days, “We didn’t kill people. We didn’t murder people.”

“So we call him the fat taker.”

“Wasichu is taker of the fat, fat taker, meaning selfishness, pettiness and greediness. Those are all contrary to Lakota thought and philosophy, the way of life.”

“I spoke at Occupy Wall Street and said, ‘We call them waichu. You call them the 1 percent. They understood.”

“These fat takers are mining uranium, not only on my homeland, but down here, wherever they find it,” she said, adding that Indigenous in Australia are also fighting Cameco uranium mining.

"Their greed for money outweighs our way of life and our relevance in this world.”

She also described how upsetting it is at home, on Pine Ridge Indian land, when wasichu come and want the little children to dance for them.

“They want to have our cultural experience, but they don’t want us.”

“We are trying to make that change at home, whenever the people come and want to see the little children to dance.”

White Plume said colonization is a requirement for fat takers to keep mining.

“Our identity is being a relative with Ina Maka Mother Earth.”

Debra White Plume, Lakota mother and grandmother, was recently arrested blockading the megaload trucks on Pine Ridge in South Dakota. White Plume was arrested with other Indigenous Peoples in protest of the tarsands and proposed Keystone XL pipeline at the White House in September. Censored News readers selected White Plume as Censored News Person of the Year 2011.

Watch for the next article in this series from the Native Nation Water Rights Symposium at Censored News. http://www.bsnorrell.blogspot.com
Copyright Censored News.