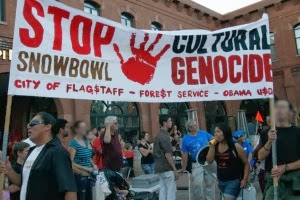 FLAGSTAFF, Arizona — Armed plain-clothed City of Flagstaff cops showed up at a community member’s home and at a community center yesterday. The officers, Kevin Rued and Eric Greenwald, stated that they were doing "preventative maintenance” and that they’re going to "have the entire front grassy area of the courthouse roped off specifically for protestors” as a free speech zone at the City of Flagstaff and Snowbowl sponsored Dew Downtown event.
Critics of the event have stated that, “more than 300,000 gallons of drinking water for fake snow at a recreational event sends the wrong message when we live in the high desert and we're facing a water shortage. Dew Downtown is contrary to the values of sustainability that the City of Flagstaff proclaims."James Kennedy, a community member who has been involved with efforts to protect the San Francisco Peaks was alarmed by the visit, “It's chilling & terrifying. Armed men showed up at my house, I didn’t know if I was going to jail yesterday morning."Flagstaff police officer Kevin Rued made it clear that the visit was, "because of snowbowl and the making of snow…”“...our supervisors were saying that they got information from off of Facebook or Twitter...that people were going to chain themselves and cause this huge disruption.” stated officer Rued. Mr. Kennedy questioned why he was being targeted and not Snowbowl supporters who have been known to be violent. He mentioned an incident at Dew Downtown last year when a drunk Snowbowl supporter attacked two Indigenous children. Mr. Kennedy stated, “It looks bad when police come to check in on us when at the last Dew Downtown the only thing that happened was the pro-Snowbowl lady came and attacked my friends." Kevin Rued responded that he knew of the incident, “I think somebody got beat up.”At last year's Dew Downtown a Snowbowl supporter rushed into a circle of protesters and assaulted two young Diné boys, both 11 & 13 years old, who were singing and drumming. After punching at them, she grabbed at the drums and tried to break them.Police initially refused to charge the assailant.However, those present were insistent that she be charged and ultimately the prosecutors office agreed to pursue charges. After a year in court, she took a plea deal the led to probation, thousands of dollars in fines and restitution, and classes in anger management.About 150 people have signed up on a Facebook event organized to boycott Dew Downtown calling it “an unsustainable and irresponsible use of Flagstaff’s precious drinking water.”Boycott organizers state reasons to boycott the event include:    •    More than 300,000 gallons of drinking water for fake snow is unsustainable,    •    It is unseasonably warm & Flagstaff is anticipating a drought,    •    Arizona Snowbowl, a major sponsor, threatens public & environmental health, and violates human rights of Indigenous Peoples by desecrating the San Francisco Peaks with treated sewage snowmaking,    •    At Dew Downtown in 2013, two native children were attacked by a drunk racist Snowbowl supporter. The City of Flagstaff has ignored this hate crime.The boycott organizers state, "Flagstaff has so much more to offer than unsustainable & disrespectful recreation.”Using water of any kind to make snow has been a contentious issue over the years. More than 50 arrests have been made since Arizona Snowbowl started expanding development to make snow from contaminated treated sewage on the San Francisco Peaks. The protests were all peaceful actions to stop the environmental destruction & desecration of the mountain which is help holy by 13 Indigenous Nations.On August 7th, 2011, Flagstaff police aggressively attacked a peaceful march through downtown Flagstaff. Six people were arrested with some tackled by law enforcement agents without provocation. Five of those arrested then had their charges dropped, only one person had made a plea deal.For more information: www.protectthepeaks.org.

"City" but instead, community folks don't have power -those 99%. World bank money markets and its police enforcers backed by local laws that promote anti-sustainability and are in control. 'We' cannot expect "City" to override these threat and destruction, but this shows (they) want to reinforce such state of fear.