KPFK: US cover-up of nuclear testing of Indigenous in Marshall Islands 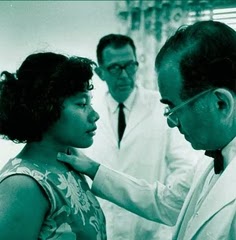 American Indian Airwaves Tuesdays 8pm to 9pm (PCT) on KPFK FM 90.7 in Los Angeles, FM 98.7 in Santa Barbara, FM 99.5 China Lake, FM 93.7 North San Diego, WCRS FM 98.3/102.1 in Columbus, OH, and on the Internet @ www.kpfk.org
Part 1
Adam Horowitz, Director, Producer and Writer, joins us live to discuss the documentary, Nuclear Savage: The Islands of Secret Project 4.1(http://nuclearsavage.com), PBS has refused to broadcast over the past year. Adam has been forced to undergo numerous revisions, yet the film has not broadcasted to date. Using U.S. declassified documents, interviews with Indigenous peoples from the Marshall Islands, the film uncovers how the U.S. government conducted nuclear testing, from 1946 to 1958, above ground or near Bikini and Enewetok atolls. The film shows, the heavily exposed people of Rongelap were then enrolled as human subjects in the top secret Project 4.1, evacuated to another contaminated (radioactive) island, and studied for radioactive fallout for over 30 years. Adam joins us live for the most of the hour for station Winter Fund Drive. The DVD will be exclusively available on tonight’s show.

Part 2
Walter Echo-Hawk, (Pawnee Nation), is an Indigenous speaker, author, and attorney who has worked to protect the legal, political, property, cultural, and human rights of Indian tribes and Native peoples. Echo-Hawk discusses his book,In the Light of Justice: The Rise of Human Rights in Native America and the U.N. Declaration on the Rights of Indigenous Peoples. Echo-Hawk provides suggestive methods for implementing the UN Declaration of the Rights of Indigenous Peoples as means to heal and stride towards Indigenous human rights.
American Indian Airwaves regularly broadcast every Tuesday from 8pm to 9pm (PCT) on KPFK FM 90.7 in Los Angles, FM 98.7 in Santa Barbara, FM 99.5 China Lake, FM 93.7 North San Diego, WCRS FM 98.3/102.1 in Columbus, OH, and on the Internet @ www.kpfk.org.


Missed shows for the past 60 days can be accessed at: http://archive.kpfk.org/