Seeking nominees for Censored News Heroes in Resistance
Censored News will honor our heroes. Please send us the names of your heroes, so we can honor those who made a difference in 2014. Please include grassroots people, media, and all other heroes.
Also, please nominate heroes for Censored News Lifetime of Resistance Award.
Thank you!
brendanorrell@gmail.com
at December 10, 2014 3 comments: 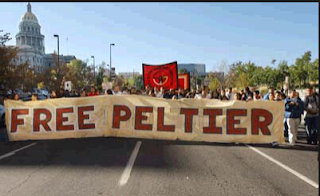 December 10th, International Human Rights Day, marks the beginning of a Human Rights Action Center (www.humanrightsactioncenter.org) global campaign to seek clemency for Native American Leonard Peltier. Peltier, now 70 years of age, was imprisoned for his alleged involvement in an incident that occurred on the Pine Ridge Indian Reservation, South Dakota, in 1975. The Peltier  case has been the subject of "In the Spirit of Crazy Horse" by acclaimed author Peter Matthiessen and "Incident at Oglala," a documentary film produced and narrated by Robert Redford.  In declining health, Leonard Peltier has served nearly 40 years in prison. His first application for clemency was filed in late 1993 and denied over 15 years later (in 2009) by then President George W. Bush. The circumstances of Peltier's conviction have drawn the attention of Amnesty International and other human rights organizations, as well as the World Council of Churches and the European Parliament.  The Dalai Lama, Nelson Mandela, Coretta Scott King, former United Nations High Commissioner for Human Rights Mary Robinson, Senator Daniel K. Inouye (D-HI), and thousands of other supporters have asked for Peltier's release. Native peoples across the United States have joined with the HRAC, Archbishop Emeritus Desmond Tutu and other luminaries and organizations (including but not limited to Harry Belafonte, Kris Kristofferson, the late Pete Seeger, members of the Oglala Sioux Tribe, the National Congress of American Indians, Wes Studi, Chris Eyre, Carlos Santana, Jackson Browne, Irene Bedard, Peter Gabriel, Michael Moore, Chaske Spencer, Chef Art Smith, and Tom Morello) to bringPeltier’s case back to the public's attention. Premiering on December 10, the HRAC's public service announcement (https://www.youtube.com/watch?v=iBPfEHhFJ-0) has been executive produced by HRAC founder Jack Healey (instrumental in the campaigns to free Nelson Mandela, Aung San Suu Kyi, and others); directed by Douglas Busby; co-produced by Jack Magee and Douglas Busby; and conceived and written by Sheron Wyant Leonard. Censored News
www.bsnorrell.blogspot.com
at December 10, 2014 1 comment: