Once again, John McCain is the darling of the coyotes and snakes 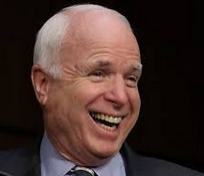 Sen. John McCain's new mode of genocide is no where more obvious than in the slick theft of Apache sacred lands for the benefit of a foreign corporation for copper mining. Of course, McCain's theft of sacred lands in Arizona is nothing new, nor is the complicity by the corrupt media who are in the saddle with fellow politicians and corporate bedfellows.

With deception and spin, McCain and his team of thieves hid away the theft of Oak Flat, sacred lands of Apache, in the National Defense Authorization Act passed by the Senate on Friday, after being passed by the House. McCain and his fellow thieves in Congress have duped the public once again. And they all came out smiling.

The snakes used similar spin and deception for the so-called Navajo Hopi land dispute, which was actually to clear Navajos off their land at Black Mesa for Peabody Coal. The coal fuels one of the world's dirtiest coal-fired power plants, Navajo Generating Station, on the Navajo Nation in Arizona.

The stench of this government and media deception is also found in the secret files of the United States internment camps where Aleuts were forced to live, and many died of starvation and disease, during World War II. Even in the mid-Twentieth Century, the US government carried out a secret program of sterilizing American Indian women in Indian Health Service hospitals.

The deceptions are also obvious in the United States destabilization of Mexico by providing assault weapons to the drug cartels. The ATF's gunrunning, including Project Gunrunner, Fast and Furious and Operation Wide Receiver, began under the Bush administration in Texas in 2005, according a US Justice Dept. document.

Around the world, the US military's agenda is to provide weapons and whatever is needed for guerrillas, regardless of whether they are on the side of good or not. This fact is made clear in the US Army manuals. The purpose is to destabilize countries from within, which gives the US the advantage and enriches the US corporate war profiteers. It also creates homelessness for the dispossessed, who become migrants, and can once again be turned into profit by private prisons in the US.

Perhaps America is too busy shopping at Walmart -- which has made slaves of their employees while the owners became billionaires -- to care about the Obama administration killing innocent women and children with drones, as they strike without individuals being charged or given trials.

Perhaps Americans are too busy doing their holiday shopping to care that Indigenous Peoples defending their lands around the world have been assassinated in 2014 by mining companies and others.

Perhaps Americans are all satisfied with the watered-down US torture reports, media cover-ups of police murders of blacks, and dull TV news and national radio programs claiming there is no racism in America.

Perhaps one of the saddest of all of the news items in 2014 was the lack of it. As national reporters for Indian country news continued to stay home and plagiarize, they let the coyotes and snakes run free in Congress.

McCain, once again, is the darling of the coyotes and snakes.


Petition to White House
Hidden in the defense bill was a package granting illegal land swap near Superior, Ariz., for the benefit of a foreign company Rio Tinto PLC who seek to mine copper.
Resolution Copper -- a Rio Tinto venture with BHP Billiton Ltd. -- would be given more than 2,000 acres of federal land in return for more than 5,000 acres of company land.
Conservation advocates and American Indian groups, particularly the San Carlos Apache Tribe, have for years been trying to block the swap, saying the mine would damage natural resources and culturally sensitive areas. A site called Apache Leap in the Tonto National Forest has been of particular concern.
https://petitions.whitehouse.gov/petition/stop-apache-land-grab/rnMfH0WL


More on these stories at Censored News www.bsnorrell.blogspot.com
at December 14, 2014

On the mark, Brenda, again and again. But you know, I find more and more Americans this year feeling sober, bemused and even disinterested about the holiday season. Seems they're having a hard time breathing. I mean the chokehold comes in many variations, including, as your article demonstrates, laws implicitly - even explicitly - written to facilitate acts of violence or subterfuge by friends in high places.

Brenda, you nailed it.