Zapatistas: On Ayotzinapa, the Festival, and Hysteria 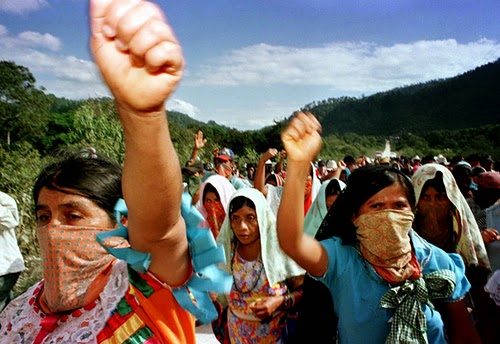 On Ayotzinapa, the Festival, and Hysteria as a Method of Analysis and Guide for Action. Subcomandante Insurgente Moisés

Zapatista Army for National Liberation
December 2014
To the compas of the National and International Sixth:
To the National Indigenous Congress:
To the family members and compañeros of those killed and disappeared in Ayotzinapa:
Sisters and brothers:
Compañeros and compañeras:
There are many things we want to tell you. We won’t tell you all of them because we know right now there are more urgent and important issues for all of us.[i] Thus we ask for your patience and your attentive ear.
We Zapatistas are here. And it is from here that we see, hear, and read that the voice of the family members and compañeros of the murdered and disappeared of Ayotzinapa is beginning to be forgotten and that now, for some people out there, the more important things are:
-the words coming from other people that have taken stage;
-the discussions over whether the marches and protests belong to the well-behaved or the badly behaved;
-the discussion about whatever it is that appears most frequently and rapidly in social media;
-the discussion over what tactic and strategy will “move beyond” the movement.
And we think that the 43 from Ayotzinapa are still missing, as are the 49 from the ABC Daycare, the tens of thousands of murdered and disappeared citizens and migrants, the political prisoners and disappeared prisoners.
We think that the truth is still kidnapped, and justice is still disappeared.
And we think that the legitimacy and autonomy of this movement [of the family members and compañeros of Ayotzinapa] must be respected.