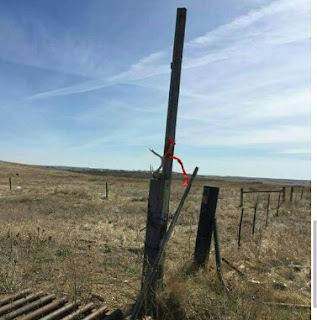 
Cannonball, North Dakota - On April 1st, 2016, tribal citizens of the Standing Rock Lakota Nation and ally Lakota, Nakota, and Dakota citizens, under the group name "Chante tin'sa kinanzi Po" will have a Horse Ride to celebrate the founding of a Spirit Camp that will be erected along the proposed route of the bakken oil pipeline, Dakota Access. This camp will be called Iŋyaŋ Wakȟáŋaǧapi Othí, translated as Sacred Rock, the original name of the Cannonball area. The Spirit Camp is dedicated to stopping and raising awareness of the Dakota Access pipeline,  the dangers associated with pipeline spills and the necessity to protect the water resources of the Missouri river.

Chante tin'sa kinanzi Po is a grassroots group with the following mission statement: "They claim this mother of ours, the Earth, for their own use, and fence their neighbors away from her, and deface her with their buildings and their refuse." - Chief Sitting Bull. His way of life is our way of life--standing in opposition to the Dakota Access Pipeline is our duty.

Both are in the Lakota language.

Dakota Access Pipeline (DAPL), owned by Energy Transfer Partners, L.P., is proposed to transport 450,000 barrels per day of Bakken crude oil from the lands of  North Dakota to Patoka, Illinois. The threats this pipeline poses to the environment, human health and human rights are strikingly similar to those posed by the Keystone XL. Because the DAPL will cross over the Ogallala Aquifer (one of the largest aquifers in the world) and under the Missouri River twice (the longest river in the United States), the possible contamination of these water sources makes the Dakota Access pipeline a national threat. The construction of Dakota Access will threaten everything from farming and drinking water to entire ecosystems, wildlife and food sources surrounding the Missouri. The nesting of bald eagles and piping plovers as well as the quality of wild rice and medicinal plants like sweet grass are just a few of the species at stake here.

Waniya Locke (Ahtna Dene, Dakota, Lakota, Anishinaabe) Standing Rock Descendent states: "We do not need oil to live, but we do need water, and water is a human right and not a privilege."

Virgil Taken Alive, Standing Rock Member states: "Of the many atrocities we as Native Americans have faced and overcame, this is one which will affect not only us but all of mankind. Earth is our mother. We have to protect her.".

Joye Braun, community organizer on the Cheyenne River Sioux Reservation states: "The dangers imposed by the greed of big oil on the people who live along the Missouri river is astounding. When this proposed pipeline breaks, as the vast majority of pipelines do, over half of the drinking water in South Dakota will be affected. How can rubber-stamping this project be good for the people, agriculture, and livestock? It must be stopped. The people of the four bands of Cheyenne River stand with our sister nation in this fight as we are calling on all the Oceti Sakowin or Seven Council Fires to do so with our allies, both native and non native in opposing this pipeline."

"The DAPL poses a threat to our people, cultural and historically significant areas. We will stand with our Hunkpapa relatives in defending against any major environmental, public health and safety hazards within our treaty territory."

Strength,honor and protection for your people. I'm sending my prayers and good energy to help you, even though it may be little. I'll share your postings and public awareness.