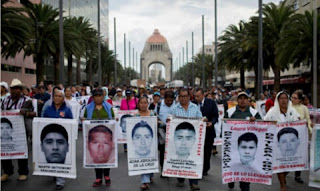 Ciudad Juarez writer Armine Arjona, whose poems have long given voice to the murdered and disappeared women of the Mexican border city, delivered words the woman next to her on the park stage knew all too well. Standing proud and unbending, Cristina Bautista Salvador clutched a large poster of her son, Benjamin Ascencio Bautista, who's been missing from the southern Mexican city of Iguala, Guerrero, since September 26, 2014.

When it was her turn to speak, Bautista began recounting to a crowd splashed with many youthful faces the latest trials and tribulations that she and the other parents of the 43 missing students from the Ayotzinapa rural teachers' college have endured since their sons were attacked and forcibly disappeared by government security forces nearly 18 months ago.

In recent weeks, for instance, parents searching for their children were bounced between courts handling the Ayotzinapa case in Tamaulipas and Guerrero states and subjected to a police aggression against one of their protest caravans that crisscross the nation, according to Bautista.

"It was sad," the indigenous woman from Guerrero remarked, "because we thought this was how our sons were attacked."

To an audience in a city where hundreds of women and men have also been forcibly disappeared, Bautista's words had particular relevance.

"We know there is also a lot of injustice here in Ciudad Juarez, with people who don't know the whereabouts of their cousins, nephews and daughters," she said.

Following a short speech, the Ayotzinapa mother spoke to FNS about her son, the latest developments in the parents' movement and the overall state of human rights in Mexico. Born in April 1995, Benjamin Ascencio was 19 years old when he was nabbed by Iguala police and other gunmen after the first-year Ayotzinapa student and his classmates had seized buses, ironically, for use in getting to Mexico City so the financially-strapped students could attend a commemoration of the Mexican government's massacre of students on October 2, 1968, according to the mom.

Benjamin was raised in a small indigenous community in Guerrero's La Montana region, where residents speak both their native Nahuatl language and Spanish. Growing up bilingual, Benjamin was a "very affectionate" young man who did not drink or smoke and liked music, reading, writing, and dancing to Michael Jackson, according to Bautista.

A woman with big eyes who comes across as a reserved and thoughtful person, Bautista recalled how Benjamin anguished seeing his mother work hard in the countryside to support a family. "He wanted to be someone in life, a teacher," she said. "He'd say, 'You've worked a lot for us. When I am a teacher I can help you out.'"

Despite the economic challenges, Bautista's family was "united and very happy," until the events of Iguala marred their lives forever. "The government is torturing me," the mother said of her journey since September 2014.

With crackles of pain and outrage discernible in her voice, Bautista contended that the parents of the disappeared Ayotzinapa students were "lied to from the beginning by the government," first by insinuations that their children were "narcos and vandals," and then by official accounts of the so-called Night of Iguala which have been since systematically demolished by independent investigations.

For example, Bautista said the parents were never informed by the Office of the Federal Attorney General (PGR) about the existence of a fifth bus that had been seized by the students at the Iguala bus station.
Belonging to a commercial line, the mysterious fifth bus was noted last year in a report by the Interdisciplinary Group of Independent Experts (GIEI), a panel named by the Inter-American Commission on Human Rights to conduct an independent investigation of the Ayotzinapa atrocity with the consent of the Pena Nieto administration.

Although the role of the fifth bus in the so-called Night of Iguala still has not been clarified, Bautista said news of its existence led to speculation that the students had inadvertently taken a bus used to ship heroin (a not uncommon practice in Mexico), and consequently were attacked by police and other security forces representing and shielding "the narco state."

Bautista was asked her opinion on last week's report that long-sought video footage which shows students being detained (and disappeared) in front of Iguala's Palace of Justice had been in the possession of the PGR since July 2015.

According to the Guerrero daily El Sur, Guerrero state Judge Robespierre Robles Hurtado informed the Ayotzinapa parents and supporters about the videotape's location at a meeting last week in the Guerrero state capital of Chilpancingo. Last summer, another Guerrero state judge, Lambertina Galeana Marin, made contradictory remarks about the purported footage, saying at first that it did not exist but later declaring that it "probably" did.  Based on the lack of precise information, the GIEI wrote in its initial report on Ayotzinapa that such footage did in fact exist and had been sent to Marin's court, but was likely destroyed.

"We are going to demand to see it," Bautista said. "Why do they hide it?"

Piecing together the jigsaw, including information that federal and other security forces were closely monitoring the students well before they were attacked, Bautista concluded that the government "was trying to fool us."

(Editor's Note: In a March 15 update on the video story, El Sur quoted Ayotzinapa parents' lawyer Vidulfo Rosales Sierra, staff attorney for the Tlachinollan Human Rights Center of the Mountain. Rosales said it turned out that the video delivered to the PGR in July 2015 had no relevant images, an omission he called "very grave" and smacking of criminal obstruction on the part of some officials.)

Bautista, who abandoned her previous life to participate full time  in the parents' movement in late September 2014,  praised the work of the GIEI and another international group called in to help with the investigation into the students' fates,  the Argentine Forensic Anthropology Team, for their separate probes which found no evidence to support former Mexican Attorney General Jesus Murillo Karam's assertion that the 43 students were murdered and incinerated at the Cocula garbage dump outside Iguala.

The Guerrero mother said the parents now demand that the government allow the Argentine forensic specialists and the GIEI, whose mandate expires on April 30, to continue their investigations in Mexico.
Accordingly, the parents' movement is organizing a mass campaign in Mexico and abroad between April 24 and 29 in order to make a visual statement on the streets calling for the retention of the international experts.

"We are going to ask that (big) banners be displayed everywhere," including in the United States, Bautista said.

Generally thought of as a "Mexican problem," Ayotzinapa in fact is an international one with links and ramifications that span continents, as Bautista touched on. The attack on the students exposed the reign of a narco-government in Iguala that protected a flourishing opium poppy harvest and heroin industry supplying the brisk U.S. market.

The rampant violence in and around Iguala between competing crime groups escalated amid the so-called drug war conducted by the Mexican and U.S governments under the framework of the Merida Initiative since 2008.  The Iguala violence has continued unabated since September 2014. In the latest case, a union official and another man were murdered in a March 14 attack carried out in broad daylight.

According to El Sur, the real target of the attack might have been rural leader Cirilio Taboada Salgado, who apparently escaped unscathed together with Esther Orea Vargas, a former Iguala city council representative for the Mexican Green Party under the administration of ex-Mayor Jose Luis Abarca, now jailed in relation to charges stemming from the Ayotzinapa affair. Tabaoda's brother, Mauro Tabaoda Salgado, was detained by the Federal Police in January and implicated by the Mexican government in the attack on the Ayotzinapa students.

In her interview with FNS, Bautista was quick to remind that the arms used against the Ayotzinapa students on the evening of September 26-27, which resulted in the outright killings of three students and three civilians and the critical wounding of two students (one of whom remains in a coma), were German weapons manufactured by the Heckler and Koch company and shipped to Mexico.

Thousands of arms were sold in violation of German regulations prohibiting weapons transfers to Mexican states with major human rights violations, including Guerrero, Chihuahua, Chiapas, Oaxaca, among others.
The Mexican arms trade set off a still-brewing scandal in Germany, prompting demonstrations and legal charges against a half-dozen Heckler and Koch executives.

Speaking at the park where the Benito Juarez Monument is located in downtown Juarez, Cristina Bautista attended the Fifth Annual Feminine Jam organized in celebration of International Women's Day.

The weekend event, also held at the site of the regular Sunday cultural bazaar, featured women rappers, poets and musicians from Mexico, Central America and the United States. Co-organizer Susana Molina, who sings with the women's hip hop group Batallones Femininos (Feminine Battalions), said the Juarez public was "receptive and attentive" to an event bearing the theme "We want them alive.."

As a photo exposition of different women's struggles attracted many onlookers, the poetic lines, "I don't find myself. I am disappeared," stood spray painted on the wall of an adjacent public bathroom. There a poster projected the face of Bertha Caceres, the Honduran indigenous rights and environmental activist who was recently assassinated.

Underlined by the hash tag "Vivas nos queremos (We want them alive), the poster proclaimed, "Berta will return and be millions."

Luna Negra, Batallones Femininos member from Mexico City, said the case of the 43 Ayotizinapa students represents the "pain that our country is suffering" from forced disappearances.

"It is an unremitting feeling of knowing someone you love is not there, but you don't know if the person is dead," she told FNS.  "You don't even have a tomb to cry in."

Among the socially and politically-oriented songs on Batallones Femininos brand new album is a piece entitled "Ayotzinapa."  Luna Negra defined the new album as "raw, realistic social criticism, but with a strong feeling of unity, of love, and of life."

After almost 18 months on the road, Bautista said she and the other parents won't give up the struggle to find their sons. From her standpoint, the relatives' protests on the 26th of every month have succeeded in creating popular consciousness and solidifying bonds not only in regards to the 43 Ayotzinapa students but the 27,000-plus other disappeared people in Mexico as well.  Grassroots economic support has proven critical in sustaining the movement, she added.

"This is important, that we aren't alone, that Mexico is not alone," Bautista reflected. "The important thing is to unite, to make noise and to invite people who don't want to come out to get involved. We should be united so the government doesn't continue killing or disappearing us."