Apaches defend ceremonial grounds of Oak Flat from copper mine

From Wendsler Nosie, Sr.
Apache Stronghold
Senators and Representatives,
March 8, 2016
I submit this letter to call on the protection of our religious rights as indigenous people and the
protection of Oak Flat and all sacred sites.
Recently, Rep. Paul Gosar has been escalating his attacks on the San Carlos Apache Tribe, spreading misinformation and outrageous prejudice against our people and our religious practice.
As a Representative of the U.S. Congress, Gosar has failed to protect our rights as humans, our rights to exercise our religion as God made us to be. He has done all that he can to support the destruction of our holy place that is so intricately a part of who we are as a people.
Oak Flat, known to us Chi'chil Bildagoteel, has always been our connection to our Mother, our right to exist, a central part of our prayers, songs, stories and spiritual practices. It is from here that we emerged. It is who we are.
We have lost so much. So many of our people, the original people of this land, have been wiped out, and those that remained were removed, exiled, from our indigenous lands and placed in concentration camps.
Chi'chil Bildagoteel, our holy land , was put under the care of the U.S. government, and because of its uniqueness, the great value of maintaining its ecological and cultural integrity, protected by its laws.
But now these laws are being subverted. The land handed over to foreign mining concerns through underhanded backroom deals by Arizona representatives in the U.S. Congress
eliminates these protections.
For more than a decade, strong united opposition to legislation that would transfer Oak Flat to Resolution Copper, prevented Congress from acting on it. So the Arizona representatives
circumvented the process with a last-minute amendment to a must pass National Defense Authorization Act in December of 2014.
So one year ago we began a spiritual journey, along with our elders and children, to express and exercise our religious rights at Oak Flat. To pray, conduct our ceremonial dances, and
other spiritual practices. We have remained present there ever since.
And we will not leave.
We have the support of hundreds of tribal leaders. And we call on ali Americans to join us.

Our Mother is threatened. It is our legal, moral, and spiritual duty -- our right -- to protect Her from destruction. From irreparable damage at the hands of Resolution Copper. Not just for us,
but for all Americans in this country, and for those yet to be born.
Last week, despite Rep. Gosar's repeated attempts to thwart this designation, the Nationa Park Service announced that it has listed Oak Flat on the National Register of Historic Places,
as Chi'chil Bildagoteel Historic District, giving weight to its importance as a site of cultural significance.
Still, Rep. Gosar, is pressuring the Forest Service to enforce its rules that limit camping at Oak
Flat to 14 consecutive days, rules that as indigenous people practicing our religion we are not
subject to. The United States has legal and moral obligations to provide access to Native
Americans and to protect these traditional territories.
In an effort to restore the will of the people, a large bi-partisan coalition of Members of
Congress led by Rep. Raul Grijalva and Sen. Bernie Sanders have introduced the Save Oak
Flat Act, (H .R. 2811 and S. 2242) to repeal the land transfer and reestablish its protection for
future generations. The House bill has 42 co-sponsors , the Senate bill has 3.
However, Sen. John McCain and Rep. Gosar have been blocking the bills from being assigned
to committee. It is vital that we continue to push for a vote on these bills, to correct not only an
injustice to Native Americans, but also to the American people.
I have come to learn by traveling the country and meeting vast numbers of people who now
occupy America, that we are not the only ones who live in exile, in bondage to greed and
exploitation. I have witnessed that many who live in towns and cities across the continent also
experience similar hardships because they do not have a voice in what truly matters.
Federal policies must change for us and all Americans.
The federal government has failed to protect or religious rights, our intimate connection to our
Mother Earth. We assert our right to continue exercising our religious rights and protecting Her
from destruction.
And we invite all Tribal leaders and representatives, all our relatives, and all children of the
earth to join us on this sacred journey.
The future of those yet to be born depends on it.
Sincerely,
Wendsler Nosie, Sr.
Apache Stronghold
apache.stronghold@gmail.com 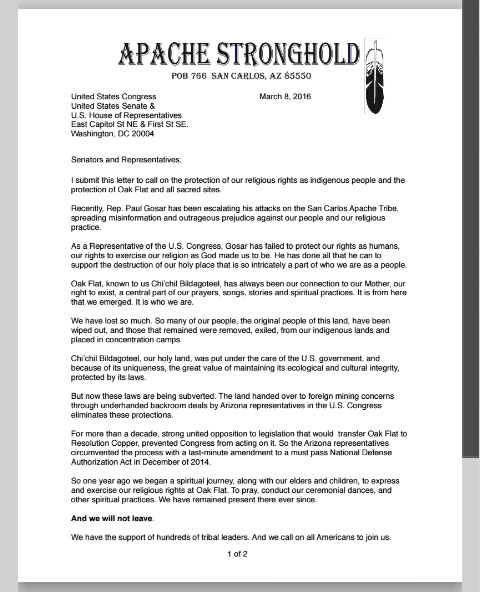 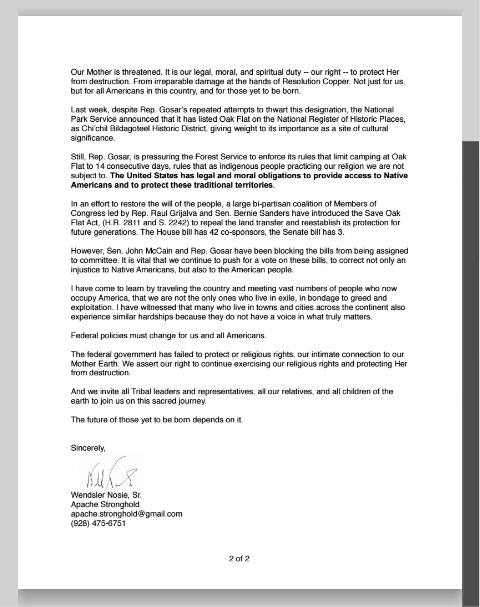