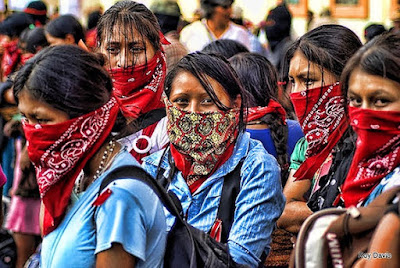 Considering:
First: That the serious crisis that shakes the entire world, and that will only worsen, puts the survival of the planet and the entire population, including human beings, at risk.
Second: That politics from above is not only incapable of coming up with and constructing solutions, but is also among those directly responsible for the catastrophe already underway.
Third: That the sciences and the arts rescue the best of humanity.
Fourth: That the sciences and the arts now represent the only serious opportunity for the construction of a more just and rational world.
Fifth: That the originary peoples and those who live, resist, and struggle in the basements of the entire world possess, among other things, a fundamental wisdom: that of survival in adverse conditions.
Sixth: That Zapatismo continues betting, in life and death, on Humanity.
The Sixth Commission of the EZLN and the Zapatista bases of support:
CONVOKE ARTISTS, FORMAL AND NATURAL SCIENTISTS, COMPAÑER@S OF THE NATIONAL AND INTERNATIONAL SIXTH, THE NATIONAL INDIGENOUS CONGRESS, AND WHATEVER HUMAN BEING WHO FEELS CALLED, TO THE FOLLOWING ACTIVITIES:
ONE: TO THE FESTIVAL AND SHARING EXCHANGE “CompARTE FOR HUMANITY” WHICH WILL TAKE PLACE July 17-30, 2016.
All those who practice ART can participate. For Zapatismo, an artist is anyone who considers their activity as art, independent of canons, art critics, museums, wikipedias, and any other “specialist” schemas that classify (that is, exclude) human activities.
The festival will have two major events:
The first will be at CIDECI, San Cristóbal de Las Casas, Chiapas, México, and in any other venues and alternative calendars that are implemented according to the attendance confirmed. All persons, groups, and collectives who register and/or have been invited can participate in this event. The deadline for registration is up to and including June 15, 2016. The email where you can register for this activity is compArte@ezlnorg.mx.
The other will be at the Caracol of Oventik, Chiapas, Mexico. In this event only Zapatista bases of support will offer their artistic expressions. To this end, from the month of February through the month of June, 2016, in the Zapatista communities, regions, and zones, tens of thousands of men, women, children, and elderly Zapatistas will hold meetings and festivals to decide the forms of their artistic expression and select who will participate. The Zapatista part of the festival will begin July 17, 2016.
Invited and registered artists can offer their art itself or a reflection on it.
Entry is free (with previous registration).
TWO: To the FESTIVAL IN HOMAGE TO THE NATIONAL INDIGENOUS CONGRESS for its 20 years of struggle and resistance, TO BE HELD OCTOBER 12, 2016, at CIDECI in San Cristóbal de Las Casas, Chiapas, Mexico. In the days before and after the event, the National Indigenous Congress will hold the activities it considers pertinent in the place or places it determines. Registration for observer-participants in the festival in honor of the CNI can be made at the following email: CNI20aniversario@ezln.org.mx.
THIRD: To the gathering “The Zapatistas and the conSCIENCES FOR HUMANITY” TO BE HELD from December 25, 2016 through January 4, 2017, at CICECI in San Cristóbal de Las Casas, Chiapas, Mexico.
In this gathering, participation in the discussion will include ONLY invited formal and natural scientists, in addition to, and as students, Zapatista young people, bases of support, who will present their doubts, questions, and inquiries to the attending scientists. Although entry is free (with previous registration), only the invited scientists and the Zapatista young people who have been selected to attend by their communities, regions, and zones will be able to take the floor to speak. There will be no exam for the students; but for the scientists…well, good luck with the questions. To register to attend as escuchas (listeners), use the following email: conCIENCIAS@ezln.org.mx .
We will share more details in the coming days.
From the mountains of the Mexican Southeast
Subcomandante Insurgente Moisés
Mexico, February 2016.