Rodriguez Uncensored on State Sponsored Violence: 'On the Path to Sacred Justice' 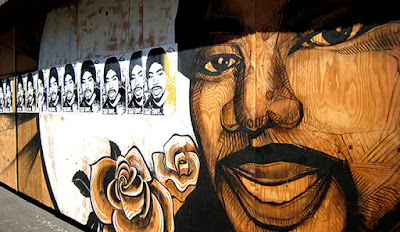 Censored News shares this column by Roberto Dr. Cintli Rodriguez, which has been censored elsewhere.

On the Path to Sacred Justice
By Roberto Dr. Cintli Rodriguez

Once again I find myself among grieving families, among families who bleed and tremble when they speak, all the while insisting they are witnesses or survivors, not victims. All the families present at this United Voices Against State Sponsored Violence event have tragically lost family members to the scourge of law enforcement violence.  And while the air is heavy-laden with trauma here, there is also much strength at this standing-room-only event at the African American Community Service Center in San Jose, Calif.

Each of the family members are here to bear witness, affirming that they will not remain silent: “Silence is consent,” says Cephus Johnson, the MC of the event and uncle of Oscar Grant, who was killed by a BART police officer in Oakland in 2009. When a family loses someone to this kind of violence, many times, “they are shocked into silence. Sometimes they are just shocked.”

Other families represented here are those of Antonio Lopez Guzman, Richard “Harpo” Jacquez, Alex Nieto, Yanira Serrano, Diana Showman, Phillip Watkins, Rudy Cardenas and Steve Salinas, just to name a few. All of these were killed unjustifiably and several of these cases are still mired in the judicial system.

Several years before, after a spate of law enforcement killings in Southern California, I attended an anti-police brutality rally in Anaheim, Calif., where I noticed something similar. At this statewide multiracial rally, family after family member, most of them Black or Brown, gave their testimonies regarding the killing of their loved ones and virtually everyone that spoke broke down while speaking. For some, that meant their voice quivering whereas others had to be helped off the stage.

The previous time I had gone to something similar to this was in Washington DC, shortly after 9-11, for a gathering of survivors of torture and political violence. It was a most powerful gathering; a time for survivors to speak. They were offering themselves as evidence regarding the horrors of torture, this while the Bush administration was both employing it, obfuscating it, while justifying it as a necessary tool in ‘the war on terror.”

In Anaheim, I wondered if the pain of families who are tortured, brutalized or who lose family members in other parts of the world, due to state-sponsored violence, suffer or grieve differently? I had the same thoughts in San Jose.

On this occasion in San Jose, a few days ago, I was present, not as an observer, or even as a journalist, as I have been a columnist virtually my entire life. Instead, I was there with the families as someone who has also experienced the wrath of that extreme law enforcement violence in 1979 and the dehumanizing reality one lives in its aftermath. A regular reporter probably could file a story about the speakers and the content of what they spoke, but that would not do justice to what transpired at this event.

How does one begin to put into words, that which flows from broken hearts and shattered dreams? How does one explain the shock, the numbness, the pain, the anger, the loss of trust and even the loss of innocence, especially of the children [survivors]… all the memories and emotions that come to the fore and that don’t ever go away?

One woman, Angelica Garza, sister of Frank Alvarado, killed by Salinas, Calif. police officers, spoke with so much anger that something did not feel right… but what would have felt right? Soft words and tears? As she relayed: ”I stand before you, but I don’t like it.” Alvarado, from Salinas, Calif., was shot in 2014 by numerous high-velocity bullets, while armed with a cell phone.

Another family member who co-organized the event, was Laurie Valdez, the wife of Antonio Lopez Guzman, who was killed by San Jose State University police in 2014. As with all the families, she continues to press for answers. “The pain is forever,” she said, also explaining that their son, Josiah, is still waiting for his father to come home. “When asked by his friends about his father, he tells them, “the cops killed him because he spoke Mexican.” This alludes to the fact that the Spanish-speaking Lopez Guzman was shot in the back, though SJSU police maintain he charged at them with a 12-inch drywall knife. While both officers wore body cameras, the footage has not been released. [And the video will probably never released as the judge recently granted summary judgment to the officers, meaning unless Guzman’s family appeals, this means end of trial proceedings].

Sharon Watkins, mother of Phillip Watkins, killed by San Jose police in Feb 2015 also spoke of the nature of her pain: “Nobody needs to feel this pain because it cannot be healed.” Her son was purportedly killed in what is known as “suicide via cop.”

While powerful, I also feel uncomfortable seeing survivors or family members pour their hearts out because it involves a lot of retraumatization. I see survivors subject themselves to this all the time while recounting horrid details. I know because I used to do it myself, all the time. At this event, other family members spoke about being part of this club. But they also noted that no one wanted to be part of this club. And that's the point. We are part of a family actually, more so than a club and we are in this family not by choice, though it is understood that being a part of it carries with it a very special responsibility.

Sometimes I feel like I have learned everything there is to learn about this topic and yet, during this trip, I made the realization that ending state-sponsored violence is about what a friend and colleague, Ricky Medina, refers to as a sacred purpose or a sacred responsibility, and even more precisely, something I have come to refer to as: sacred justice. I came upon this concept accidentally. Dolores Huerta had scribbled a note regarding social justice on a police brutality scrapbook I have, though I misread it as sacred justice, just before speaking at the event in San Jose [I interviewed her for a book I was writing because she was almost killed in 1988. She had supported me during my trials from 1979-1986]. At the event, I invoked the concept of sacred justice, a concept that I presented as something beyond the law, or more precisely, something beyond the judicial system. While speaking, something just poured out of me, knowing and understanding that many of us get ensnarled in the legal system, which often becomes even more traumatizing than the events themselves. That is, the media often demonize and dehumanize those killed and their families and the survivors, and it is ugly. This happens even if we win in the courtroom. But this idea of sacred justice has little to do with the law. That is, whether one wins or loses in the courtroom, families and survivors are traumatized for life. So, what is sacred justice? Right now it does not exist. And in the society we live in, it cannot necessarily exist. But now, I am convinced that is what we need to strive for.

I have monitored this extreme brutality for some 45 years. And I will say unequivocally that we do not currently have a system of justice in this country. Some people would blame biased and unaccountable law enforcement agencies for this situation, and that would be correct. But more correct would be to understand that it is also a biased judicial system and cowardly politicians, and finally it is the citizenry (biased juries) that permit this lawlessness.

This is not about the philosophical pondering about the origins and nature of this abuse and brutality. We are to the point where virtually zero convictions of guilty officers over the past generation tells us that the only place to turn to is perhaps the international criminal courts. That is, either the Organization of American States or the United Nations. Both criminal courts exist precisely for when the courts in a given country do not function. And this is unquestionable when it comes to the brutalization of people of color in this country; the courts have never functioned. The issue of state-sponsored violence in this country is prima facie evidence that a reign of impunity for law enforcement has always existed, particularly when it relates to the abuse of the Black-Brown-Indigenous peoples of this country. Additionally, for these peoples, law enforcement has always functioned, more than anything, as a system of control.

Sacred justice would not simply be the movement to compile and take cases to either of these international criminal courts, which must be done. That would be but one step, though sacred justice is part of that sacred responsibility to ensure that those killed and their families, first and foremost, are never forgotten or neglected, but honored. It is that, but truly, it is beyond words.

·       When I originally wrote this, the trial of Alex Nieto had not yet commenced. The trial came and went and the publisher that was supposed to publish this, did not. The officers were found not guilty of using excessive force, despite firing 59 bullets against him.

Rodriguez is an associate professor at the University of Arizona.

A country established on genocide of our pueblos, que mas esperarp