The Panama Papers and the Navajo Cuban Food Deal 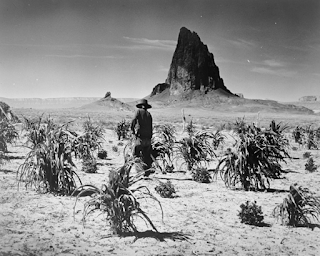 The Panama Papers expose a link to Indian country, and the story behind the story of the Cuban Navajo food deal is an intriguing one

The Panama Papers leak of offshore tax havens has for the first time exposed a link to Indian country. It is to Cuba's Alimport, Cuba's import food agency, which the Navajo Nation entered into an agreement with for the sale of food. The food was to come from the Navajos commercial farm, Navajo Agricultural Products Industries, NAPI, near Farmington, New Mexico.

Although the leaked Panama Papers reveal an offshore financial haven for Alimport, linking it to a Great Britain bank and a Swiss connection, it is unclear if laws were broken. Cuba was attempting to avoid the embargo at the time. During the negotiations between Cuba and the Navajo Nation, the Navajo farm said it was working with two banks, Wells Fargo and Chase, to transfer the payment to an overseas bank and then wire it to NAPI, since Cuban money by law could not be stored in the United States.

What is most interesting is the story behind the story. It begins while I was still a staff reporter at Indian Country Today. It would prove to be one of the last stories that I ever wrote for the newspaper. Indian Country Today terminated me without cause weeks later. I was a staff writer there for most of the years between 1995 and 2006.

The story begins with a delegation from Indian Country Today, owned by the Oneida Indian Nation in New York, going to Cuba, while the Navajo Cuba food trade deal was brokered in 2006. At least one Indian Country Today editor and reporter went to Cuba. The news delegation planned a positive article about  the sovereign Navajo Nation selling its crops to Cuba.

At home in the Southwest, I was assigned to write about it. The first article I wrote shared the details. The Navajo Nation's delegation signed a letter of intent with Cuba to sell its crops in 2006. Navajos agreed to sell wheat, apples, yellow corn, onions, and pinto beans to Cuba.

Navajo President Joe Shirley praised the deal, as an agreement between two sovereigns.  At the time, Fidel Castro had temporarily stepped down due to illness. A US law, passed in the year 2000, allowed US suppliers to sell to Cuba on a cash-only basis, paid in advance.

''There are grandmas and grandpas over there. They have to eat,'' President Shirley said in 2006.

As I began my research on NAPI at the time, I was quickly rebuked by the Indian Country Today editor who went to Cuba. In an e-mail, he forbid me from researching NAPI's genetically-modified seeds and the Raytheon Missiles factory on the Navajo farm land.

The Navajo farm said that it was purchasing its seeds from Monsanto, Syngenta, and Pioneer Seed -- all suppliers of genetically-modified seeds.

At the time, Indigenous were burning those seeds around the world. I wanted to know if those Monsanto and other genetically-modified plants had produced hybrids in traditional Navajo crops. This was likely by way of rain, runoff and wind cross-pollination and the dispersion of seeds in the Four Corners area.

This was 10 years ago. Now, in 2016, the crop irrigation waters in the region have been poisoned by the US EPA and its Gold King mine spill. The spill has now tainted the water of the Animas and San Juan Rivers, bringing more grief for Navajo farmers in Shiprock, N.M., and the region.

So, back then in 2006, I was forbidden to tell the story from that point on. There could be no mention of Monsanto and genetically-modified seeds, or Raytheon Missiles, while Indian Country Today staff was involved in promoting the Navajo Cuban food deal.

Well, of course, no one wanted Cuba to know that the Navajo farm was home to a Raytheon Missiles plant. And of course no one wanted to think about Navajo crops being grown from genetically-modified seeds, especially the corn.

Within weeks I was terminated by Indian Country Today with no cause given.

So today I'm reading about the long struggle of NAPI to actually sell those crops to Cuba. It is another story worth telling.

Of course President Obama has now lifted the embargo of Cuba. But still, the story is a good one.

Trade and Embargo: Cuba, Che and that perfume

First of all, a note about Cuba. On a personal note, I would like to thank the Cuban doctors in Bolivia, President Evo Morales' own doctors, in the ambulance parked outside the Mother Earth conference in Cochabamba, Bolivia in 2010, for helping save my life when I had a heart attack at the conference. Cuban doctors will always have a special place in my heart, especially those in Bolivia. Cuba, as it turns out, sent many doctors to Bolivia and Venezuela, as a result of the movement fueled by Che.

The story of Cuba and its food and trade deals, and the embargo, is one too filled with intrigue to end here. 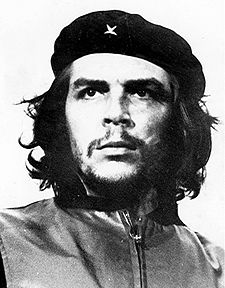 As the media currently probes the leaked bank accounts and their island tax havens, in the Panama Papers in 2016, the Miami Herald reports this intriguing bit of information about an ill-fated perfume that was to reap profits from the names of Che and Venezuela's late President Hugo Chavez.

Oh yes, everyone was struggling to make money, and do some trade.

It turns out, at one of Cuba's agencies, a nephew of Fidel Castro, retired in 2014, during "the so-called 'revolutionary perfumes' scandal, sparked when the company sought to sell perfumes inspired by Cuban revolutionary hero Ernesto “Che” Guevara and former Venezuelan President Hugo Chávez," Miami Herald reports.

Che's revolutionary groundwork in Indigenous rights was part of the nexus of the connections through the years, inspiring resistance efforts in the north and south in the Americas, and the ongoing fight against oppression and exploitation, while building a better world with fair trade, while protecting Mother Earth.

Through the years, negotiations for trade, and the struggle for Indigenous rights and protection of Mother Earth, took Native American delegations to Bolivia, Venezuela and Libya. Many Indigenous Peoples gathered in Bolivia for the Conference on Climate Change and the Rights of Mother Earth in 2010. It was Bolivia where Che was assassinated by CIA forces. 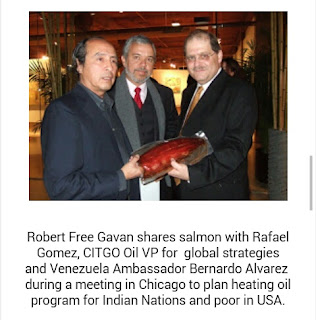 Robert Free Galvan, whose tepee was on Alcatraz during the Occupation, and who was present at Wounded Knee, spearheaded the successful project of bringing heating oil from Venezuela to Indian Nations in the US.

They are all part of the history of President Hugo Chavez and Venezuela.

Many of these Native leaders are also now part of the history of Libya, because an American Indian delegation traveled to Libya for trade.

This brings us to the fact that the US spies must have been very busy all these years. Operation Chaos documented Russell Means and others traveling abroad. Operation Chaos documented the influence of supporters for the American Indian Movement in other countries. Documents show that even decades ago, Bolivia was on the watch list, as well as European Nations which offered support during American Indian appeals to the United Nations, rallying the world to uphold Indigenous rights.

Wikileaks also exposed the espionage of Indigenous Peoples, from the Mapuche to the Mohawks, while Hillary Clinton was Secretary of State. The leaked State Department cables show clearly that Venezuela President Hugo Chavez and Bolivia President Evo Morales were tracked and targeted.

This brings us full circle back to Cuba, the Navajo farm, and the Panama Papers.

The State of New Mexico, with its struggling economy, worked hard at the Cuban food trade deal. For years, New Mexico tried to get the corn and beans from the Navajo farm and the rich farmlands of New Mexico, to the people of Cuba.

As the years passed, the Navajo farm planted 500 acres of black beans to sell to Cuba. But Navajo farm director Tsosie Lewis said that Cuba never bought the black beans, even though Navajos gave Cuba a good price. Cuba negotiated buying their black beans from China instead.

“We never sold a commercial product to them, even though we gave them a very good price,” Lewis said in 2009. “They were importing black beans from China, so they were willing to dump us. There needs to be a better effort to honor agreements, because they can just walk away from you at any time.”

That is when cows came into the picture. New Mexico, eager for trade and cash, thought about breeding cattle for Cuba.

In the end, I was unemployed and the beans never made it to Cuba.

However, I did begin this news blog, Censored News. Now you know the rest of the story.

Brenda Norrell has been a news reporter in Indian country for 34 years, beginning at Navajo Times during the 18 years that she lived on the Navajo Nation. She worked as a stringer for AP and USA Today while living on the Navajo Nation. After serving as a longtime staff reporter for Indian Country Today, she was censored and terminated. In 2006, she began publishing Censored News. Over the past decade, she has traveled through Mexico with the Zapatistas, covered the Mother Earth conference in Bolivia, and broadcast live with Govinda's Earthcycles on grassroots radio throughout the West. The live broadcasts included the Peltier and Boarding School Tribunals in Green Bay, Wisconsin;, the five month Long Talk Radio on the Longest Walk northern route in 2008; and Indigenous rights summits of Havasupai, Pueblo, Western Shoshone, and Tohono O'odham. Censored News is published with no advertising, grants or revenues.