Zapatistas 'Notes on the War Against the Teachers in Resistance' 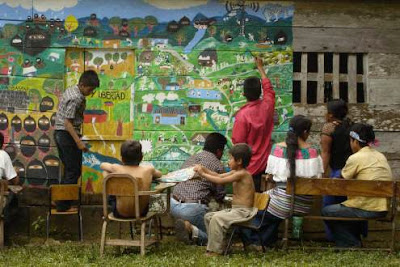 Notes on the War Against the Teachers in Resistance

Censored News is happy to share with you these three stories of planting as resistance. First, the resistance to the Utah tarsands mine, where 20 people have been arrested while sowing seeds for the next generation. Then, there are the Poncas, planting resistance to the Keystone XL Pipeline. Finally, Western Shoshone searched for places to plant willow saplings on their walk to Yucca Mountain, now targeted with high level nuclear storage that would be hazardous for a million year. The sacred mountain is at the Nevada Test Site, where the scars and radiation remain of the US reckless atomic bomb testing on Western Shoshone land.

Canyon Country Rising Tide reports 20 people have been arrested sowing seeds for a new generation, resisting the tarsands mine in Utah on the Colorado Plateau.
"Kim, Nihigaal Bei Iina said, “We must remember that if we do not fight we cannot win, we don’t even have a chance of winning. By planting seeds we have a chance of winning another round for mother earth, we still have more battles to fight within us. These seeds planted will harvest another generation of fighters and warriors.”
http://bsnorrell.blogspot.com/2016/06/utah-seed-sowers-arrested-on-united.html

Poncas are planting the Seeds of Resistance corn in the path of the Keystone XL Pipeline, reports Bold Nebraska.
“Once again we made the journey to the Tanderup farm from Oklahoma to Nebraska on the Ponca Trail of Tears to plant the sacred Ponca seeds of resistance,” said Mekasi Camp Horinek, son of Native American activist Casey Camp. “Not only in the soil of our ancestors’ homeland, but also in the hearts and minds of all the people that honor, respect and protect Mother Earth as the roots of these resistance seeds spread across the continents. So does the awareness of fight to stop keystone XL pipeline and protect mother earth for our future generations.”
http://bsnorrell.blogspot.com/2016/06/sacred-ponca-resistance-corn-planted-in.html
Western Shoshone and Northern Paiute plant saplings as a blessing and to heal the land
During the walk to the Nuclear Test Site and Yucca Mountain in May, Buck Sampson, Northern Paiute, described how walkers searched for places to pray and plant willow saplings as a blessing and healing for the land.

Buck Sampson said they are sending a strong message to the employees at Yucca Mountain.
"Our Treaty of Ruby Valley of 1863 didn't say squat on our land and put radioactive waste here to store. They contaminated the underground water and desecrated Native burials and artifacts that were there a long time before the white immigrants came to Nevada 160 years ago."
"We Natives are still here with our culture and Native values on the land. We are still Trustees of the land," Sampson told Censored News.
Photos by Buck Sampson's son, long walker Carl 'Bad Bear' Sampson, Western Shoshone.
http://bsnorrell.blogspot.com/2016/05/western-shoshone-run-blessings-for-land.html
at June 20, 2016 No comments:

Where does the media excel in covering Indigenous Peoples? Not in the United States

The Guardian, TeleSur and Aljazeera actually have reporters out covering the news of Indigenous Peoples. The United States, however, is completely failing.
The Guardian, based in London, TeleSur based in Venezuela, and Aljazeera, based in Qatar on the Persian Gulf, excel at covering Indigenous Peoples news. TeleSur is sponsored by the governments of Venezuela, Cuba, Ecuador, Nicaragua, Uruguay and Bolivia.
Currently, the United States has no media that is out covering Indian country nationally with staff reporters.
Don't be deceived by stay-at-home re-writers, like those used by Indian Country Today for the past 10 years, or copy and paste operations like indianz.
Copying others work without permission is a copyright violation. When it is done repeatedly on a large scale for profit, it is fraud and violates the ethics of journalism.
In Indian country, there is a type of fraud and deception that has become common place used by paid 'reporters.' They sit at home, or at an office desk, and steal content from the Internet. They plagiarize it, or rewrite it, and add a brief phone call interview to deceive readers into believing they are actually out covering the news.
If you are a photographer, demand payment for your photos. Don't let the thieves make money off of your work.
On Facebook, beware of the click bait. A large number of websites steal the content of hard working reporters, and then place it with ads for illegal profiteering. Don't be fooled by the names like "Free Thought Project," and look closely at those using the words "Native American" in their links.
Every time you click on the links of click bait frauds, these thieves make money from others hard work.
The news profiteers let others take the risks, do the work, and pay the costs, while they stay home and profit.

Al-Jazeera
Brazil's Fundao Dam Collapse: The Silence after the Mud
On November 5, 2015, the Fundao dam burst in the inland municipality of Mariana in the Brazilian state of Minas Gerais. The Brazilian mining company Samarco, owned by two of the world's biggest mining corporations, Vale SA and BHP Billiton, operated the dam.
http://www.aljazeera.com/indepth/features/2016/05/brazil-fundao-dam-collapse-silence-mud-160510065442136.html


TO THE INTERNATIONAL COMMUNITY
Facts
Today, June 19th, we have been witnesses of the extremely violent actions of the Mexican State repressing the teachers and the organized civil society in resistance in different areas of the State of Oaxaca including the Istmus of Tehuantepec, Nochixtlán and the city of Oaxaca.
As a result of the excessive use of force, at least six persons have lost their lives and dozens have been injured and arrested. At this moment there is no information about the whereabouts of the arrested persons neither there is an exact total number of injured and killed persons. Medical attention was not guaranteed and civil society had to create points of emergency medical attention to injured persons without being able to cope with the demand.
There are happening particularly violent actions in the city of Oaxaca tonight. We have witnessed the arrival of a large number of airplanes of the Federal Police and the Gendarmerie in the city throughout the day as well as we witness that the tension is increasing every minute.
Previous events:
In the State of Oaxaca people live in a context of generalized violence in which repression and criminalization of the social movement and particularly against the teachers who belong to the Sección 22 aggravated in a particularly severe way linked to their fight against the implementation of the educational reform. By today, organizations from civil society and Human Rights organizations reported at least 75 Human Rights defenders imprisoned as political prisoners.
Within the events of criminalization of the Oaxacan teacher´s union stand out the following:
It is important to mention that arrest warrants are issued against teachers of intermediate authority, that means against teachers who coordinate and drive the teacher´s movement. This strategy is meant to disassemble the movement.
The same way diverse relators of the United Nations made urgent calls to the Mexican authorities expressing their concerns about the violations of Human Rights reported in some cases, in particular detentions without arrest warrant and without investigation, the use of torture during the posterior period of the arbitrary detention and other violations of the guarantees of the arrested persons[1].
The use of detentions, campaigns of defamation and repression against the Sección 22 have the clear aim to lessen the teacher´s movement which plays historically an important role in the social movement of Oaxaca. Dissembling the teacher´s movement impacts directly the work which all the persons and organizations of Human Rights are realizing in the State of Oaxaca and in Mexico.
We, the signing organizations, request that organisms, which are represented by you, are on the alert regarding this particularly violent situation which exists right now and that you join us in the following demands towards the federal government as well as the government of Oaxaca:
SINCERELY
Civil Society of Oaxaca
notes
[1] UA 13/2015: In the cases of Juan Carlos Orozco Matus, Othón Nazariega Segura, Efraín Picaso Pérez and Roberto Abel Jiménez García (Working Group on Arbitrary Detentions; Special Relator on promotion and protection of the right of freedom of opinion and expression; Special Relator Especial on the right of freedom of pacific assembly and association; and Special Relator on the situation of Human Rights defenders)
UA /2014 In the case of Damián Gallardo Martínez (Special Relator on torture and other cruel, inhumane treatments or cruel, inhumane or degrading punishment, Special Relator on the situation of  Human Rights defenders, Special Relator on promotion and protection of the rights of freedom of pacific assembly and association).  Available:http://www.ohchr.org/EN/HRBodies/SP/Pages/CommunicationsreportsSP.aspx
It should be pointed out that the arbitrary character of the detentions as well as the their focus on Human Rights defenders were recognized by the Working Group on Arbitrary Detentions of the United Nations[1].
[1] Opinion num. 23/2014 in the case of Damián Gallardo Martínez y Opinión num. 56/2015 in the case of Nestora Salgado García issued by the Working Group on Arbitrary Detentions of the United Nations. 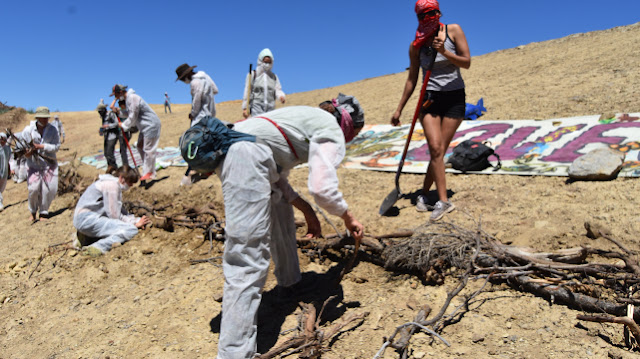 SEED SOWERS ARRESTED ON COUNTRY’S FIRST TAR SANDS MINE
SUNDAY JUNE 19, PR SPRINGS, UTATH: Thirty people walked onto the country’s first
tar sands mine and sowed seeds to regrow land destroyed by tar sands – a fossil
fuel more polluting than coal and oil. With butterfly puppets, songs, and banners,
protesters trespassed onto the mine site and took the remediation of the
stripped land into their own hands with shovels, pick axes and seed balls.
Evidently displeased with the sowing of native grasses and flowers, law
enforcement intervened to arrest 20 of the planters, who banded together and
sang until arrest.
The action was planned by the Tavaputs Action Counil, a coalition of grass roots
social justice groups of the Colorado Plateau, and came as the conclusion to a 3-
day event dedicated to celebrating land and biodiversity. Over 100 people
participated, camping on public land next to the tar sands mine and attending
workshops, panels, and music shows. People came together to hear about
indigenous resistance to fossil fuels and colonialism, and to imagine a more
equitable future together.
Canadian mining company US Oil Sands has leased 32,005 acres of public lands
for oil shale development. In the future, 830,000 acres of B land could be at risk
of irreversible tar sandsstrip mining in the western United States. Tar sands
requites large quantities of water for processing into crude oil, putting extra
pressure on a water system already under threat of running dry.
Kate Savage, Tavaputs Action Council: “By taking action today, we are creating in
the present the future we are dreaming of. This means trespassing against US Oil
Sands and other fossil fuel companies that want to make our future unlivable.”
Raphael Cordray, Tavaputs Action Council: “We took action today to tell US Oil
Sands that we are here to stay and will not be intimidated by oppressive law
enforcement and corrupt companies. Tar sands spells disaster for people and
planet, and today we said: not in our name.”
Kim, Nihigaal Bei Iina: “We must remember that if we do not fight we cannot win,
we don’t even have a chance of winning. By planting seeds we have a chance of
winning another round for mother earth, we still have more battles to fight
within us. These seeds planted will harvest another generation of fighters and
warriors.”
Media Contact: Natascha Deininger, Wasatch Rising Tide, Tavaputs Action
Council; Tel: 435-414- 9299; Email: wasatchrisingtide@gmail.com
Secondary Media Contact: Lauren Wood 801-647-1540
Website: http://www.canyoncountryrisingtide.org
at June 20, 2016 No comments: