The Panama Papers leak exposed many abroad, but very few tax evaders in the US, leaving many questions about the leak. It came after the bank leak of the Clinton Foundation, which exposed far more, including the millions in cash secretly flowing to the Clintons from mining partners on Indigenous lands, to weapons deals with the Saudis. The Clintons used a human rights front and came away with mining deals for partners.
Wikileaks had already exposed Hillary Clinton's espionage of Indigenous leaders and activists around the world, when she was US Secretary of State, including Bolivia President Evo Morales and Venezuela President Hugo Chavez, and activists from Chiles' Mapuche to the Mohawks in the north. Wikileaks cables also exposed Hillary Clinton's push for mining in Peru while Indigenous were being murdered defending their lands.
Now, the Clinton Foundation has been hacked. It shows that Canada's Frank Giustra, the Clintons mining partner exploiting Indigenous around the world, gave more than $25 million back to the Clintons through the Foundation, after they together landed mining deals on Indigenous lands globally using human rights as a front.
Read more of the hacked info of Clinton Foundation at Global Research:
http://www.globalresearch.ca/clinton-foundation-hacked-foundation-vulnerabilities-document-leaked/5532230
Censored News original: Wikileaks revealed espionage of Indigenous Peoples
http://bsnorrell.blogspot.com/2011/12/wikileaks-revealed-us-espionage-of.html
at June 23, 2016 No comments:

Zapatistas and National Indigenous Congress 'From Within the Storm'

FROM WITHIN THE STORM

Joint Communique from the National Indigenous Congress and the EZLN on the cowardly police attack against the National Coordinating Committee of Education Workers and the indigenous community of Nochixtlán, Oaxaca.
June 20, 2016
Deutsch Übersetzung ελληνικές μεταφράσειςTraduzione italianoTraduction en Français
Espanol

To the People of Mexico:
To the peoples of the World:
Faced with the cowardly repressive attack suffered by the teachers and the community in Nochixtlán, Oaxaca—in which the Mexican state reminds us that this is a war on all—the peoples, nations, and tribes who make up the National Indigenous Congress and the Zapatista Army for National Liberation say to the dignified teachers that they are not alone, that we know that reason and truth are on their side, that the collective dignity from which they speak their resistance is unbreakable, and that this the principal weapon of those of us below.
We condemn the escalation of repression with which the neoliberal capitalist reform, supposedly about “education,” is being imposed across the entire country and principally in the states of Oaxaca, Chiapas, Guerrero, and Michoacán. With threats, persecutions, beatings, unjust imprisonments and now murders they try to break the dignity of the teachers in rebellion.
We call on our peoples and on civil society in general to be with the teachers who resist at all times, to recognize ourselves in them. The violence used to dispossess them of their basic work benefits with the goal of privatizing education is a reflection of the violence with which the originary peoples and rural and urban peoples are dispossessed.
Those who delight in power decided that education, health, indigenous and campesino territories, and even peace and security are a commodity for whoever can pay for them, that rights are not rights but rather products and services to be snatched away, and they dispossess, destroy, and negotiate according to what big capital dictates. And they intend to impose this aberration through bloody means, murdering and disappearing our compañer@s, sending our spokespeople to high security prisons, making shameless torture into government marketing, and with the help of the paid press, criminalizing the bravest part of Mexican society, that is, those who struggle, who do not give in, who do not sell out, and who do not give up.
We demand a halt to the repression against the teachers in struggle and the immediate and unconditional liberation of ALL political prisoners.
We invite all of the peoples of the countryside and cities to be attentive and in solidarity with the teachers’ struggle, to organize autonomously in order to remain informed and alert in the face of the storm that is upon all of us, knowing that a storm, in addition to its turmoil and chaos, also makes the ground fertile where a new world is always born.
From the mountains, countryside, valleys, canyons, and barrios of the originary peoples, nations, and tribes of Mexico.
Never Again a Mexico Without Us!
National Indigenous Congress
Zapatista Army for National Liberation
Mexico, June 20, 2016 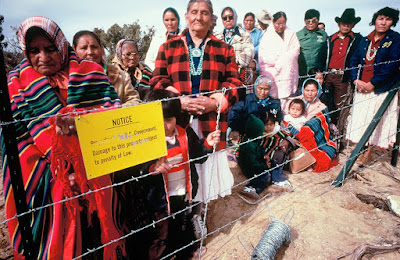 Dine' grandmothers when Peabody Coal orchestrated forced relocation
to clear Dine' off their lands for Peabody's coal mining on Black Mesa
40 years ago. Photo by Dan Budnik
Dine' Roberta Blackgoat said they were cutting out the liver of the Female Mountain when
they cut out the coal. The coal continues today to fire up Navajo Generating Station on the
Navajo Nation, one of the dirtiest coal fired power plants in the world, providing
electricity to southern Arizona. Now, Peabody Coal is filing for bankruptcy, and
plans to do as the uranium companies did, and leave behind its genocide, destruction and poison,
with the aquifer depleted and streams poisoned on Black Mesa. -- Censored News

Posted by Our Power Campaign | June 21st, 2016
Put an immediate stop to the forcible relocation and harassment of Diné (Navajo) people in northern Arizona and provide full reparations for cultural genocide caused by Peabody
Call to Action!
ST. LOUIS, MO, June 21, 2016 — Coal-harmed workers, families and allies from 50 groups across the country will “knock at the doors of power” in Peabody Energy’s headquarters city on Friday, June 24th. This will be the second national action in St. Louis led by residents demanding a “Just Transition Fund” instead of “business as usual” from the coal giant’s chapter 11 bankruptcy. Activists plan to confront the St Louis area people and institutions shielding Peabody as it uses its bankruptcy to escape accountability to workers and their polluted and economically devastated communities.
Missourians Organizing for Reform & Empowerment (MORE) invites people concerned for workers, families, and coal-devastated communities to gather at 12 pm in historic Shaw Park in Clayton, Missouri. MORE will lead a national Climate Justice Alliance / Our Power Campaign delegation—comprising 150+ people from 50+ organizations—through St. Louis County on Friday, June 24th. They will march through Clayton to point out the complicit institutions associated with the bankruptcy’s recent rulings, among other stops.
“This Peabody bankruptcy has national impact, but the political and legal infrastructure making it happen is right here in the St Louis area,” pointed out city resident and MORE member, Napoleon Robertson. “It’s people like Judge Barry Schermer and Attorneys Ehlers and Cousins of Armstrong Teasdale who are acting to ensure payouts go to hedge funds and Peabody executives instead of communities. They’re part of the machinery stranding workers and families harmed by Peabody’s dig-burn-dump business practices.” Community leaders have mapped out the St. Louis  “infrastructure of injustice” in this interactive web site.
Jihan Gearon of Black Mesa Water Coalition and the Climate Justice Alliance (CJA) / Our Power Campaign added, “There’s a better solution. Let this be the first corporate bankruptcy to fund both obligations to workers and communities, and a visionary “Just Transition” away from this harmful extraction economy.”
A Peabody Energy bankruptcy settlement directed towards a “Just Transition Fund” instead of big investor and executive payouts will:
“We’re through with that dirty, old game,” asserts St. Louis resident Basmin Nadra from MORE, “where a big coal company uses powerful local institutions and people to prop itself up. We won’t sit quiet while the legal system protects the interests of a wealthy few over the well-being of our families. We call on everyone who thinks that’s wrong to join us in demanding a better outcome. It’s time for us to recognize we are all connected in these concerns. This is an opportunity to set new precedents.”
Michael Leon Guerrero, National Coordinator of Climate Justice Alliance agreed: “Come on by Shaw Park this June 24th and you’ll hear more than opposition to a bad bankruptcy deal. Just imagine what we could do by directing resources from a dig-burn-dump industry directly toward a new, clean energy economy.”
Climate Justice Alliance: Michael Leon Guerrero, (505) 263 4982 MST, michael@ourpowercampaign.org
Missourians Organizing for Reform & Empowerment: Kennard Williams, 314-825-1334, kennard@organizemo.org OR Jeff Ordower, 314-267-4664, jeff@organizemo.org
When:  12:00 pm gather, 12:30 start march (approx 1 hr), Friday, June 24, 2016
Where:  Gather atShaw Park (corner of Bonhomme and Brentwood) in Clayton, Missouri
Spokespeople available for comment, interview
This press release also available at ourpowercampaign.org/press-release-peabody-knocking-2016-06-24
Resources
PETITION: bit.ly/payuppeabody
PRESS: bit.ly/BTUmedia
DEMANDS: bit.ly/submit_demands
SPOKESPERSON STATEMENTS: bit.ly/BTUstatements
ABOUT POWER BEHIND THE POLICE: powerbehindthepolice.com
ACTION FACEBOOK EVENT: http://bit.ly/humansnotHF