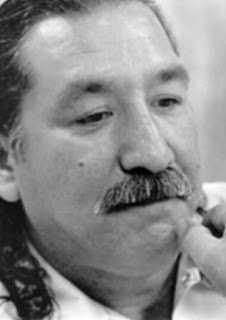 Leonard Peltier is a 71 year old elder who was convicted and sentenced to two consecutive life sentences for aiding and abetting in the deaths of two FBI agents. Leonard has maintained his innocence expressing remorse for their loss of life and also including the Native American man Joeseph Stuntz. Leonard Peltier has fulfilled his federal sentencing guideline requirements (based on 1970s) and has done almost 6 life sentences plus 20 years good time.

Mr. Peltier is an accomplished artist and author and is renown for his humanitarian achievements including being nominated for the Nobel Peace Prize and was also awarded the Human Rights Commission of Spain, an International Human Rights Prize and several other Prizes.

Leonard Peltier has several medical problems which include an Aoric Aneurysum and suffers from diabetes and its complications.

With the recent request of former United States Attorney, James H. Reynolds to release Leonard Peltier "in the best interest of Justice" and the numerous human Rights organizations including Amnesty International who also support clemency.

Chairman Harold Frazier, Chairman Cheyenne River Sioux Nation
Good Afternoon,It is with great pleasure that I forward this letter signed by Chairman Harold Frazier to President Barack Obama regarding clemency for Leonard Peltier. This letter will be mailed today and sent through our contacts to the White House. Please feel free to include a copy of this letter as needed and forward through your channels as well. Thank you for all your hard work and support!
Remi Bald Eagle
Intergovernmental Affairs
remi.baldeagle@crst-nsn.gov
Office: (605) 964-4155 ext. 226
FAX: (605) 964-4151

Please the time is now to do the right thing here. Leonard has been proven innocent let him out.