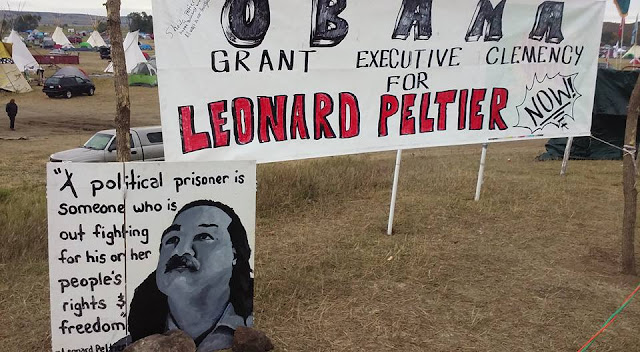 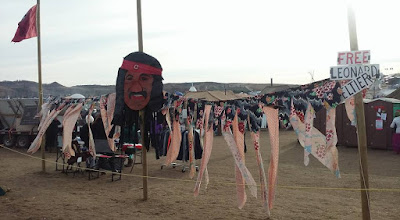 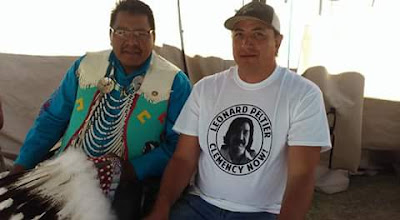 Letter and Photos by Jean Roach, Lakota
Censored News
Dear Water Protectors, Relatives and FriendsLet me introduce myself, my name is Jean Roach, of the Mnicoujou Lakota from the Cheyenne River Sioux Tribe. I am a board member of the International Leonard Peltier Defense Offense Committee (ILPDOC).  I am also a survivor of the "1975 Oglala Firefight." I have introduced myself to many representatives who have been to Standing Rock in support of our fight against the Dakota Access Pipeline (DAPL).
There many Leonard Peltier Supporters staying at Standing Rock camp called Oceti Sakowin. We support Leonard Peltier as a "Political Prisoner" and his bid for Executive Clemency, Justice and Freedom. We are asking all Water Protectors and allies who supported the FIGHT against Dakota Access Pipeline (DAPL) to send tribal resolutions, or letters of support to President Obama.  We have several resolutions and support letters from the Standing Rock Sioux Tribe, Oglala Sioux Tribe, Turtle Mountain Band of Chippewas, Spirit Lake Tribe, Yankton Sioux, Crow Creek Sioux and numerous others, but it is urgent that we gather as many as possible!Many Water Protectors have witnessed the destruction of our sacred sites by (DAPL). Twenty-six ancestral grave sites and numerous religious alters have been desecrated by their bulldozers. There are many effigies sites along the Missouri River, but one area is dedicated to the WARRIORS!!   It is this area that is referred to as "No Warriors Left Behind." This sacred site is where we remember and honor Leonard Peltier. He has been imprisoned for more than forty years as a "Political Prisoner" for his beliefs as a warrior to protect Unci Maka (Mother Earth) from destruction.  For generations, the Oteci Sakowin Nations (Seven Councils of Fires) and their allies have been and still are under attack by colonizers which include both private corporations and government policies. In the past, tribal Nations have fought Railway systems, Mining companies, the United States federal government, and their representatives over land, and natural resources, which were promised through Treaties. Today, we are fighting the same colonial battle, but now it is against a billion-dollar corporation (DAPL), vigilantes, and US officials who continue to break these treaties to steal land.  In Leonard Peltier's case there are several violations of the treaties that include,  jurisdiction and illegal land transfers used for uranium mining. As a "Political Prisoner" Leonard has withstood inhuman treatment inside the prison and has been denied basic medical care. For these reasons Amnesty International has labeled him a Political Prisoner.  The genocide of Nations has created criminal acts which include targeting people, or persons and imprisoned them based on political views, and or revenge.  In the continued genocide against Indigenous Nations, Water Protectors have been jailed as "Political Prisoners" along with media representatives in their fight against the pipeline. This also includes several human civil, and treaty violations against them! The FIGHT is bigger than the DAPL pipeline because it is associated to generations of genocidal attacks for land and resources.  Understanding genocide and political prisoners like Crazy Horse, Sitting Bull and Leonard Peltier and their fight for JUSTICE includes 1800s fight against gold mining and the 1970s fight against Uranium mining both in the Black Hills area that are in violation of both the 1851 and the 1868 Fort Laramie Treaties. During the late 1800s, they were targeted for their participation at the Greasy Grass Battle (Battle of Little Big Horn) which included eliminating the 7th Calvery.  Many Warriors suffered in US Prisons were they were severely beaten and or killed. There are similarities at the Protector's Camps and the Oglala Camp and how they were targeted by aggressors who used stereotypes and misinformation to justify unlawful practices. DAPL has hired numerous agitators who come into the camps to cause trouble and spread rumors.  One example is during the 1970s the FBI operated a program called "cointelpro" which served the same purpose of disruption and misinformation.
During 1800s after the Wounded Knee Massacre, the mainstream media called it the "BATTLE" of Wounded Knee and forgot to mention that the people were UNARMED, women, children, and elders that were massacred. After the Oglala Shoot Out the media called people who lived there "30 Well Armed Gorillas" which turned out to be about 10 teenagers and 5-7 adults. Today's mainstream media barely covers the Water Protectors events and promote misleading stories of  "missing cattle near the camp" this story was untrue and late recanted. The mainstream media served as an arm of genocide to confuse the general public on the TRUE issues. The Genocidal WAR against Indigenous Nations has never stopped!! This is happening today and some people cannot understand it because colonization has blinded them and become mentally brainwashed! Definite understanding of the vital importance of freeing Leonard Peltier by Executive Clemency will HELP promote a sense of Justice and start to neutralize an uneven justice system. The United Nations has supported Peltier's freedom by recommending that Obama examine his case.
Today, Leonard Peltier has suffered for more than 40 years in prison and has been incarcerated based on his beliefs as a member of the American Indian Movement. His participation at Wounded Knee 73, Oglala 75 and for other actions that demanded equal treatment for Indigenous Nations. Leonard is a 71-year-old elder who suffers from diabetes and has an aortic aneurysm and in need of specialized medical treatment. We can help Leonard come home to his family and meet his grandchildren and other family members he has not ever met.
Please write, email, or send message on Facebook, or write a letter of support for Leonard Peltier's Executive Clemency to President Obama. Time is running out. There are 11 days before Obama leaves office. Please send Letters of support to President Obama, and send a copy of your support letter to LPDOC at contact@whoisleonardpeltier.info
Mitayuye Oyasin
Jean Roach

We must never forget that genocide in America always begins with unjust laws. First and foremost is the Doctrine of discovery. This was an 1823 Supreme Court decision that said that the white man came into ownership of the land when Columbus showed up. The government wants to pay what the land was worth when it was discovered/taken. This is the power behind the (completely out-of-court) billion dollar settlement the government is offering the Lakota for their homeland. This is all true because they took $48 billion out of the Homestake (Gold) Mine alone. That figure alone would have made all the difference in the world, had there been even a trace of justice or due process of law.