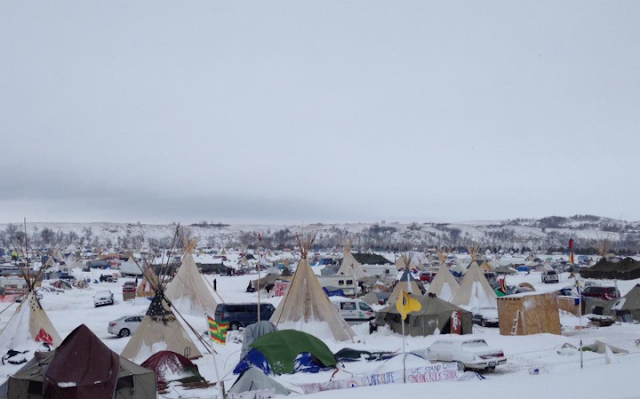 The Standing Rock Sioux Tribe voted unanimously on Friday, Jan. 20, for everyone in the camps to leave. It voted in support of Cannonball District's resolution and cancelled plans for a new winter camp. The tribe's resolution to close the camps applies to all camps -- Oceti Sakowin, Rosebud and Sacred Stones Camp.

Three days earlier, on Jan. 17, the Standing Rock Sioux Tribe said it planned to bulldoze the camps located on the flood plain on Jan. 30. Many water protectors say that is not sufficient time to relocate to higher ground, and there is no need to abolish the camps this early in the season.

Although the tribe had promised land on higher ground for the camps, the tribe said Friday it has cancelled its commitment for a new camp.

The Standing Rock Sioux Tribe said in a written statement on Jan. 17:
"Today, representatives from the various camps and the Standing Rock Sioux Tribe met at length to develop a plan for relocating from the camps in danger of flooding. The tribe is preparing the new site by clearing it of snow, and the plan is to open it up on Friday, January 20th. Tribal and camp leadership are asking that everyone remaining in the flood plain camps remove themselves and their belongings to the new site by January 29th."
"On Monday, January 30th, the tribe will be sending in equipment to the flood plain camps to remove and dispose of remaining waste and materials in preparation for early flooding. The tribe and camp are working in cooperation to take advantage of this brief respite in extremely severe weather to take precautions to keep the remaining water protectors safe and prevent camp materials from entering the river. We appreciate everyone's cooperation."
Jan. 17, 2017

In December, the tribe voted to reallocate $3.2 million which had been donated for the water protectors in the camps, to pay off debts and for the tribe's own use. 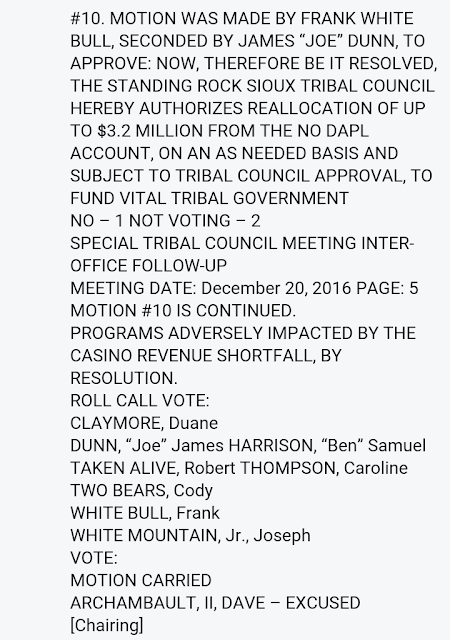 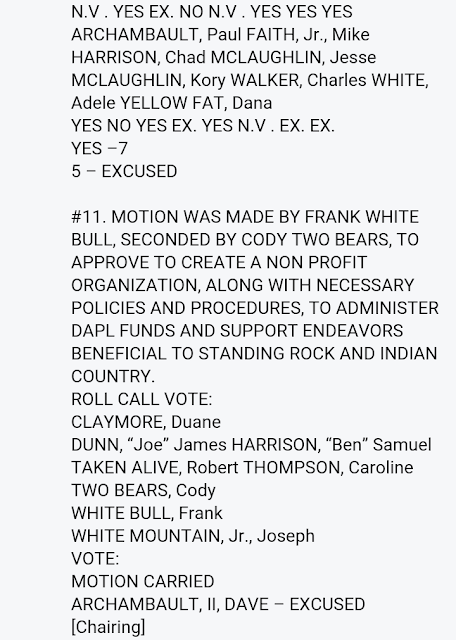 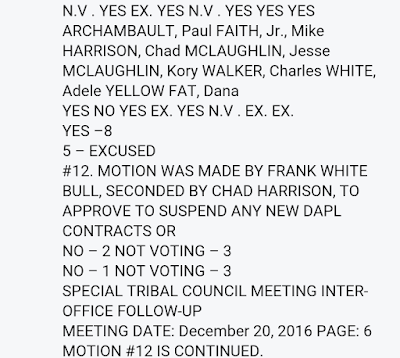 Move Camp in January?
I did not hear why.
Does area usually flood?
Items that the money will be spent on?
Transparency. Consensus.
The water protectors are sacrificing and committed.
The money that was sent to Standing Rock was for the Water Protectors.
How has it been spent?
Of course the community is important. That's why all those people wanted to help.
We all need water to live.
So make it right by all.

Where will the new camp be?

According to the tribe's statement on Friday, there will be no new camp. The tribe said it is closing all camps.

Do we know the source of information stating the reallocated 3.2million dollars?

Also, what is the money going to if not the camps?

Who is then going to be able to watch and guard the drilling site?
The tribal elders/council need to rethink there vote. Also Chairman Archambault has never posted the donations received since last August when the cry went out for donations. What is the secrecy about, all money needs to be accounted for, same with the warehouse of donated items - never audited as he said would be!
I have signed and written my comments to the USACE on what needs to be done on the EIS and sending observers as per the order to the drill site(s).
WE cannot allow DAPL/ETP to even get near the EIS procedures by getting the courts to over turn, the Law is the Law when getting a project approved with a full transparent filing with all Stakeholders fully involved and also the Public.

Who is going to be checking the drill site if no camps are nearby.
DAPL/ETP cannot be allowed to coerce the Tribal elders and David Archambault, so no one can check any work.
The flood aspect is because USACE was going to raise the water height by opening the dam up river of the Oceti camp - no doubt DAPL/ETP and there lawyers are involved.
Also where is the donation list of who donated funds-$3.2 million is not a small #? David Archambault said this list was to be done last August and posted to there web-site!
There are many Water Protectors who have provide transport and David Archambault said they would be reimbursed for repairs, gas etc- also what about all the donations in the Tribal warehouse [Generators, stoves, blankets, tools, food and personal shipments made/] where are they?
The tribal Elders and Council need to rethink before doing what they say. All those folks who have stayed may not return in the Spring and DAPL/ETP will just proceed unhindered, if forced to leave or recamp elsewhere- and the USACE fence off the area for GOOD so it cannot be reoccupied in the Spring!

With Respect you asked for support and donations to feed, clothe and attend to the needs off the people, Tribal People and Water Protectors a like. Trailer Trucks of Meats and Produce were brought to you at Standing Rock, Yurts and other supplies from Gas Masks to Flashlights. we are now hearing that people Can Not get Food - can not get Medical Supplies. Water Protectors that have been arrested protecting Your Sacred Lands can not make Bail or Pay for Legal Defense,and yet you are choosing to take $3.2 million away. This is the beginning of a Large Human Rights battle That you choose to take to the World Court with the assistance of the U,N, and ITC - the Donors are dismayed and feel used. Please Do Not bring Dishonor upon ALL the people, PLEASE. They will not Donate again. And I promise you - again with Respect, that they will be needed. PLEASE Assist All Water Protectors who were arrested for Standing Rock and Turtle Island, Please Assist all that Marched for you in d,C, People gave up jobs and homes to come Stand with you!! I beg you Respect Them,,, Please! AHo! Redwolf, daughter of Fire hawk Lakota - Badger Clan, and daughter of Blackfeather - Montagnais

Sadly, as much as I fight and stand, daily...with this corruption in Tribal Government, I see that we will lose this fight with the black snake. We need people to stand with us, to fight with us and to pray with us. When you take the money that was meant to help us, pay for legal fees, medical supplies and other things needed, you are cutting the throat on your own land and your own people.
I don't know my true ancestry, but my heart has always been with what I feel is true...Native American Indian. I have been told several times at PowWows...if you believe it, then you are. I have been "adopted" by a few friends who know my passions and how I feel. But hearing that Standing Rock Tribe now no longer wants to help their Sister and Brothers, who are fighting hard to protect their water and sacred lands...I shake my head at those Tribal Gov't leaders. You are forgetting your past, what your elders have taught you, shown you and guided you, with love and spirit.
I will continue to stand tall and proud with my strong Sisters and Brothers...until the end! A'Ho!