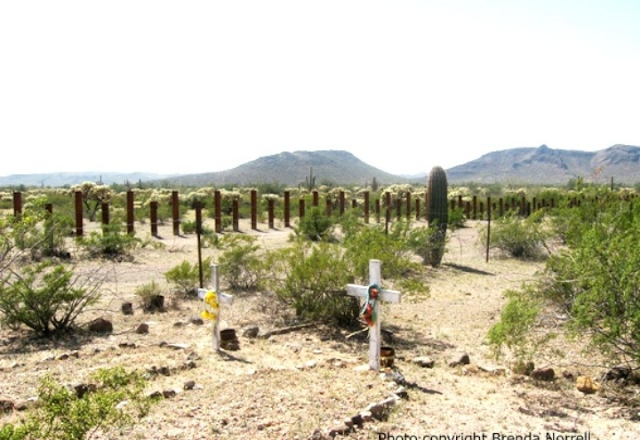 President Trump intensified his reign of terror on Wednesday, as Trump ordered a border wall, which will separate Indigenous communities in the borderzone -- from California to Texas -- including the Kumeyaay, Cocopah, Tohono O'odham, Yaqui, Apache, Kickapoo and others whose communities are dissected by the international border.
Further, the wall would place Indigenous at risk, including O'odham, who must reach hospitals in the United States to survive.
Today's order follows Trump's orders on Tuesday of expediting the Dakota Access Pipeline -- which endangers the water source of millions who depend on the Missouri River -- and reviving the Keystone XL pipeline, which threatens the water source of those who depend on the Oglalla Aquifer.
Hundreds of Native American water protectors and their allies remain camped in the bitter cold and snow at Standing Rock, ready to defend the water from the Dakota Access pipeline which plans to drill beneath the Missouri River to construct a crude oil pipeline.
Further, today's action by Trump targets sanctuary cities, and ensures more Border Patrol agents who will continue unbridled abuse on the border.
Hundreds of Border Patrol agents, and ICE agents, have been convicted in recent years for drug smuggling and serving as "spotters" for cartels to bring their drug loads into the U.S. according to testimony before Congress.
Further, Border Patrol agents have acted with impunity and murdered, raped, and beat Indigenous Peoples and others in the borderzone, even murdering a teen in Mexico by shooting through the border in Nogales, Arizona.
The Border Wall will serve no purpose except to enrich the favored corporations and send a message to the world that the United States has fallen prey to a white supremacist president and his regime, endangering the lives of U.S. citizens and people around the world.
In the news today:
Trump moving forward with border wall, weighs refugee cuts
AP/MSN
"Mexican President Enrique Pena Nieto, who has insisted his country will not pay for a wall, is to meet with Trump at the White House next week.
The orders Trump signed Wednesday also increase the number of border patrol and Immigration and Customs Enforcement agents to be hired. And the president ordered the end of what Republicans have labeled a catch-and-release system at the border. Currently, some immigrants caught crossing the border illegally are released and given notices to report back to immigration officials at a later date."
http://www.msn.com/en-us/news/politics/trump-moving-forward-with-border-wall-weighs-refugee-cuts/ar-AAmcqxz?OCID=ansmsnnews11

The refugee policies are part of an executive order he is expected to issue as soon as Thursday, according to an eight-page document, a copy of which was obtained by The New York Times.
The order would require tougher vetting of foreigners fleeing persecution and place a monthlong ban on allowing any person into the United States from Iraq, Syria, Iran, Sudan, Libya, Somalia or Yemen. Refugee admissions would be halted for 120 days while a review of screening procedures is completed. When it resumes, the program would be far smaller, with the total number of refugees resettled in the United States this year more than halved, to 50,000 from 110,000.
https://www.nytimes.com/2017/01/25/us/politics/refugees-immigrants-wall-trump.html
at January 25, 2017 No comments:

Please post & distribute.
MNN. Jan. 24, 2017. onkwe’hon:weh does not mean sovereignty. It means we are the natural people who follow the original way and are placed on this land by creation. Everyone else is an invader.

Donald Trump is the president/CEO of a bankrupt private corporation, the ‘United States of America’ [US incorporated ISO #3166-2:US [Feb. 21, 1871]. U.S.A. is like a pirate ship. When the pirates raid another vessel, they take all the stolen loot and stash it on one of their secret islands. Maps are secreted for future pirates to find the booty.
If any holders of the US debt demand payment, the corporation called the United States of America will be forced to file for bankruptcy.
Trump is experienced with bankruptcies, which makes him an ideal president for the shareholders of the corporation. Those private shareholders will be absolutely liable for the debt of the corporation. They have names and addresses.
U.S.A. has no gold to back their money. Federal Reserve Bank notes are worth as much as the paper they are printed on. Their only valuable assets are the military hardware [aircraft carriers, missiles, guns, ammunition, bombs, planes, etc.] These will be turned over to all their creditors. Once U.S.A. is out of the game, there will be no more war problem on earth.

Trump plans to terminate the corporate INDIANS tribal councils starting with Alaska. All the Western Hemisphere belongs to the onkwe’hon:weh, the natural people. We never surrendered or sold any to U.S.A. or anybody else. Peace treaties allowed them to stay on our land. They violated every peace treaty with the onkwe’hon:weh, which are now null and void. Everything goes back to one day before the treaty was signed.

Trump and Trudeau plan to terminate us. They will be terminated. We will be where we belong, on our land. [Canada incorporated ISO #1366-2: CA [1867].
The corporate tribal and band councils do not represent us. They are deck hands on the ship. They have to obey the Captain or he can make them walk the plank.
The settlers have always had an option to join with the onkwe’hon:weh. [Article 3, Jay Treaty of Trade & Commerce 1794] and follow the Red Road [great peace].

Trump ordered the Dakota and XL Pipelines to immediately steal our resources to squeeze every drop of oil from great turtle island to pay their debt.
It was the veterans and the large numbers of supporters who stood and fought with us that stopped the pipeline.

“SINK IT & PAY YOUR PARKING TICKETS BEFORE YOU LEAVE!”
U.S.A. is desperate. Removing the US from the UN will makes them a rogue state in the world.
The women of the world displayed their awesome power as we saw on January 21, 2017. Stand now to protect the water of mother earth.
Jimi Hendrix could be singing about Standing Rock: “Water, don’t ever change your ways. Fall with me a million days. Oh, my water fall”.