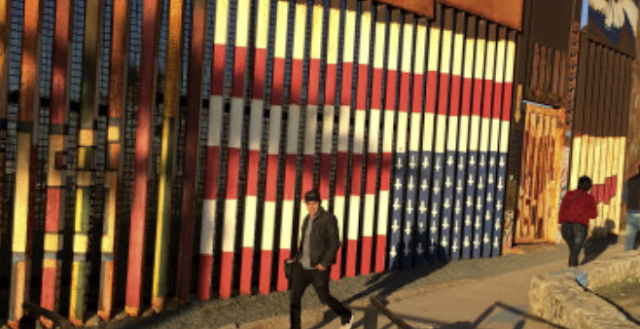 Emergency Demonstration against Donald Trump and the Far-Right
Open the Borders! Support Indigenous Sovereignty! No One Is Illegal!
SATURDAY, JANUARY 28, 12PM
Bethune Square, Guy De Maisonneuve West (métro Guy-Concordia)
Media Contact (including interviews):
Solidarity Across Borders
courriel: solidaritesansfrontieres@gmail.com
The following callout has been shared with the Montreal-area community by the migrant justice group, Solidarity Across Borders:
Donald Trump has announced, or is imminently planning, various executive measures that will attack refugees and migrants, increase violent and racist immigration enforcement, target sanctuary cities, and fund the extension of the Clinton-era wall at the US-Mexico border. His measures are racist, Islamophobic and violent. Earlier, Trump announced approval for the Keystone and the Dakota Access Pipeline (DAPL), despite sustained resistance from Indigenous communities, particularly at Standing Rock, North Dakota.

This a moment to take to the streets, to denounce Trump's actions, to show solidarity with communities under attack, and to articulate our radical alternatives, without compromise.

We will gather and march this Saturday in support of Open Borders, and for the regularization of all undocumented people. We declare: No One Is Illegal.

Solidarity Across Borders has campaigned for years to build, via our grassroots networks and communities, a Solidarity City in Montreal, inspired in part by sanctuary cities in the USA. Let's defend and build the vision of cities and communities that are welcome and open to all seeking justice and dignity. Let's build from Solidarity Cities into Rebel Cities. We need more defiance, disobedience and rebellion, in the streets and in our communities.

While we resist Trump's wall extension, we should organize to support all those who will tear down the existing walls and fences. We should take direct action ourselves, to make the more than thousand-mile borders between Canada and the USA, and Mexico and the USA, effectively open to migrants.

While we defend open borders, and support efforts to disobey border imperialism and to support people migrating, we also demand the immediate cancellation by Canada of the "Safe third country agreement" with the USA. Trump's recent measures make it clear that the USA is not a "safe third country" and migrants should be allowed to pass into Canada without impediment.

The actions of seemingly more "progressive" politicians needs to be denounced. The Trudeau government supports the Keystone Pipeline, and still refuses to regularize the close to 1 million undocumented migrants living on this side of the Canada-US border. Trump's US-Mexico border wall is a continuation of sections of wall already built during the Clinton-era.

Let's build our alternatives beyond the narrow scope of hypocritical politicians whose real allegiance is to the ruling class. Let's root our resistance in support of Indigenous sovereignty and self-determination.
-----

Initiated by Solidarity Across Borders. Supported by the Montreal Resist Trump Network.


This is the English-language newswire for social justice groups in Montreal.  newswiremtl.info

To subscribe to the French-language newswire, send a message to fildepresse-subscribe@lists.riseup.net.