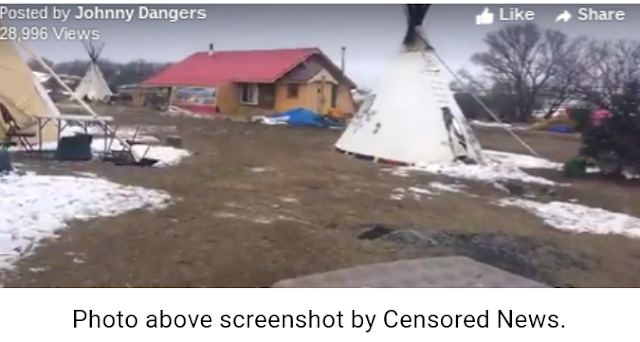 CANNON BALL, North Dakota -- The Standing Rock Sioux Tribe bulldozed the school at Sacred Stone Camp, the children's school built by volunteers from earth and straw. This comes after the tribe evicted and arrested or displaced, all water protectors at Oceti Sakowin Camp, Seventh Generation Camp and Sacred Stone Camp.
LaDonna Allard, Standing Rock Lakota land owner of the site of Sacred Stone Camp, the original camp, said the children's school was bulldozed on Wednesday.
LaDonna said this morning, "Hihanna waste I started out the day being a little down, wanting to cry, because they bulldozed down our beautiful school yesterday. I have not heard about our kitchen but I am sure it is coming down, the many prayers and songs that were shared there, I feel the loss of the fellowship we had in those places."
"These were not professional protesters, most were community members, Native people from across the Americas, many reservations, Native people from urban areas, many people came for a weekend and stayed for months, giving up their jobs and in some cases their homes, people who felt that the time is now to change the world, all ages, all religions, people who took leave from their jobs and families to protect the water, young people who came to help and stayed. We had spiritual leaders from all religions come to pray with us, people came with water from the world to offer it to the river."
"People felt that healing that is coming from the land, the healing that comes from prayer and community. People learned to live with each other in the camps, we learned the best of humanity in the camps," LaDonna said.
"We also learned the worse in humanity by Morton County, North Dakota Governors, State Officials, tribal Official, BIA police, National Guard, National Parks and Black Swan, DAPL security."
"The physical attacks on people left life-time injuries, the trauma of our own people attacking us who were suppose to protect and serve, the nightmares the water protectors are having as the loss in our humanity is seen on their faces. I have seen some great leaders arise out of this movement. The youth are the leaders for the future, we need to protect them," LaDonnna said.
Praising the Water Protectors for their sacrifices, courage and service, LaDonna said, "I will stand on truth, and I will stand for the future of my grandchildren. Mni Wiconi Water is Life."

Standing Rock Tribe Evicted Water Protectors and is Now Bulldozing Camps
The Standing Rock Sioux Tribe passed a resolution in January evicting all water protectors from the camps, which have been home to as many as 10,000 water protectors.
The tribe's resolution instructed the BIA to deliver the trespass notices to the camps. The tribe instructed all law enforcement agencies to carry out the evictions.
The Oceti Sakowin Camp, Seventh Generation Camp, and Sacred Stone Camp were attacked by police. Federal police assaulted water protectors in the same brutal, out-of-control show of excessive force that has been directed by Morton Country Sheriff Kyle Kirchmeier.
All water protectors were arrested or displaced, following the tribe's order. The camps are now being bulldozed and water protectors property is being destroyed.
Earlier in January, the tribe "reallocated" $3.2 million donated to the water protector camps by supporters, for the tribe's own use.
During 2016, as the frontline resistance grew to the Dakota Access Pipeline -- the crude oil pipeline threatening the Missouri River and water source of millions -- Indian Nations from across North America, and Indigenous from the world, came to the camps, bringing gifts, including truckloads of firewood, food, water and supplies, along with cash donations for the tribe.
At that time, the Standing Rock Sioux Tribe asked for help in fighting the pipeline and welcomed Indigenous from around the world. Standing Rock Chairman Dave Archambault began telling water protectors to go home on Dec. 4, 2016, after announcing one of many public relations announcements by the Army Corps of Engineers and Obama administration, regarding the permit for the pipeline. However, the announcements and delays were short lived, and construction continued.
Then in February, the tribe brought in militarized, federal police to evict, arrest and displace water protectors. The tribe is now bulldozing the camps and destroying the belongings of water protectors.
Sacred Stone School Construction Was Labor of Love
The movement of 'Water is Life' awakened people around the world to the message of water.
A Petaluma, California, man described the labor of love that went into building the Sacred Stone Camp school with earth and straw.
"Petaluma native Miguel Elliott said he wasn’t sure exactly what he would uncover as he helped dig through the frozen North Dakota ground last month, advancing gradually through the icy surface to reveal, inch by labored inch, the softer earth beneath."
Read article on the earth and straw building material known as 'cob construction.'"
http://www.petaluma360.com/home/6415164-181/petaluma-builder-adds-structures-to?artslide=6

As the news came today that the tribe had bulldozed the school, water protectors pointed out that these are only material items, and the Spirit can not be demolished by a small group of politicians or bulldozers.
'Stronghearts to the Front,' remains the battle cry in the Dakotas.