GENEVA, Switzerland -- Water Protectors from Standing Rock camps led the shutdown of Credit Suisse, a primary investor in Dakota Access Pipeline, during their 11 country tour in Europe, urging divestment and clean energy, and standing up for the water.
In Geneva today, the four member team -- Waste Win Young, Dakota Lakota from Standing Rock; Rachel Heaton, Muckleshoot; Nataanii Means, Dine' Lakota; and Rafael Gonzalez, Dakota -- led the shut down of Credit Suisse bank and are now at the United Nations Human Rights Council to speak.
Many European allies joined the shutdown, and chained themselves together inside the bank.
Nataanii Means said, "We did a bank shut down today at Credit Swiss which is leading the European banks with their investments into pipelines on turtle island ($1.4 billion) Rafael Gonzalez (Tufawon) was dragged out of the bank with many others.
"We demanded they divest their money and get out of investments that directly contribute to the continued genocide of our people, the environmental racism, and the destruction of our Mother Earth."
"Now we're at the UN attending and speaking at the Human Rights Intervention, Rachel Heaton and Wasté Win Young specifically."

Nataani, son of Gloria Grant Means, Dine' Omaha from Chinle on Navajo Nation, and Lakota Russell Means, said, "My pops did a lot of traveling to the UN on behalf of our people. It's surreal being here." 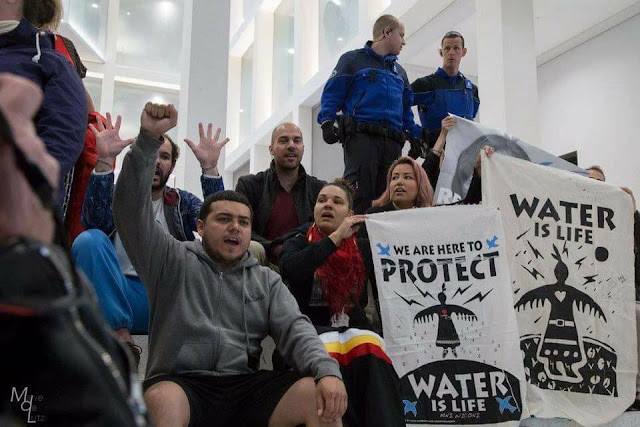 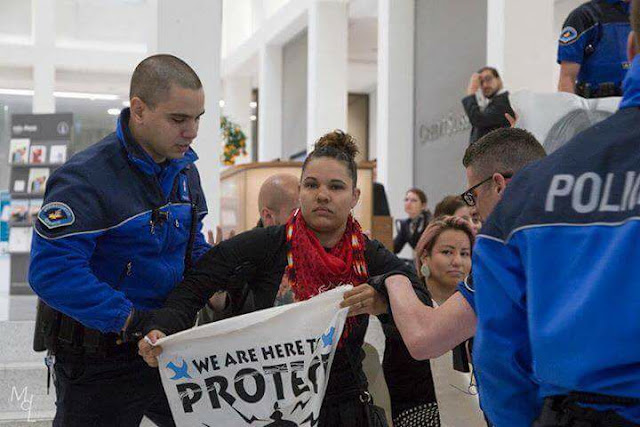 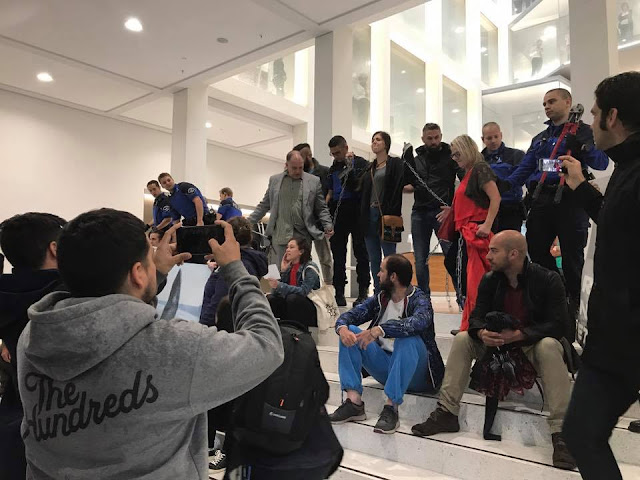 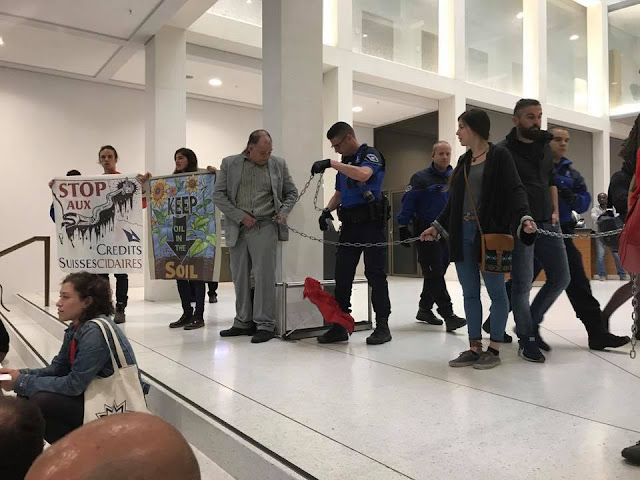 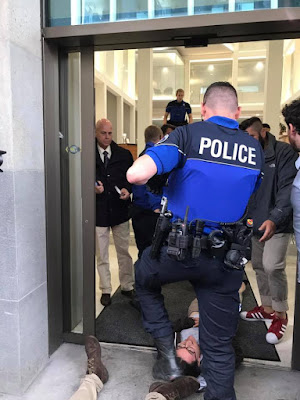 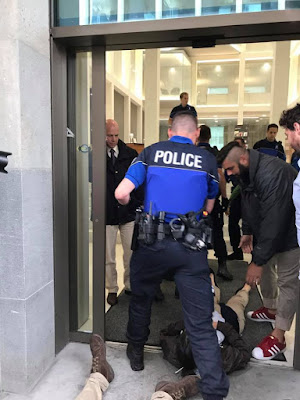 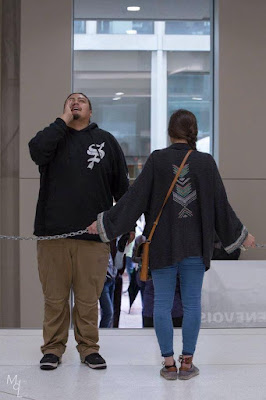 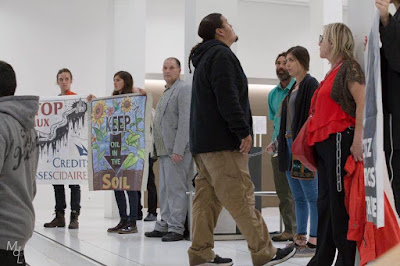 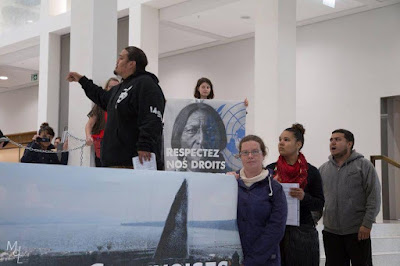 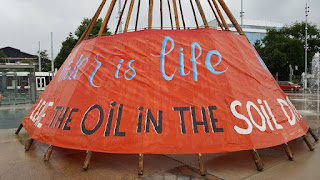 Waste Win Young said just now, "The mayor of Geneva approved to put this in front of the UN this week while we are here. We will be addressing a UN panel during the Session on Human Rights this week. Rachel will speak today and I get to speak on Thursday."
"So the U.S. may pull out of the human rights commission here at the United Nations based on the UN resolutions supporting Palestine. Yeah, uncle Sam don't pay attention to the indigenous people on turtle island and the human rights abuses you are complicit in. No problem. We forge on," Waste Win Young said now in Switzerland.
Reuters reports that the United States will warn the United Nations of withdrawal from the Human Rights Council https://www.reuters.com/article/us-usa-un-rights-idUSKBN18W173 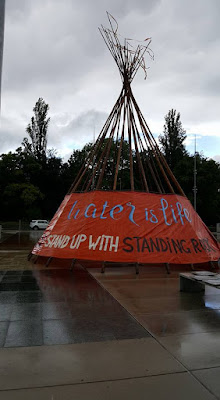 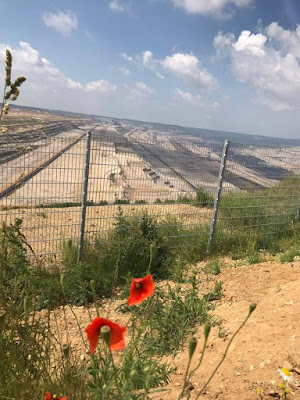 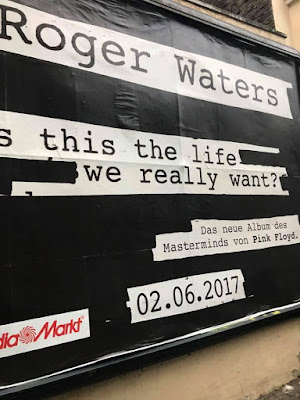 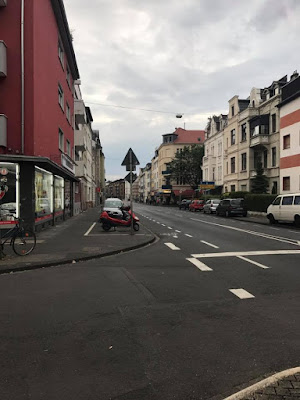 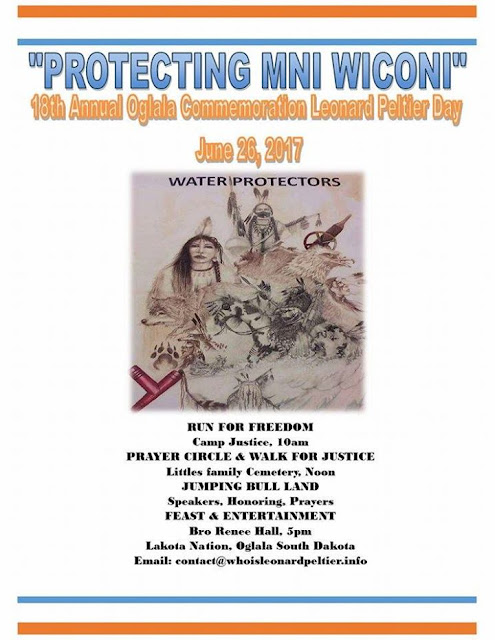 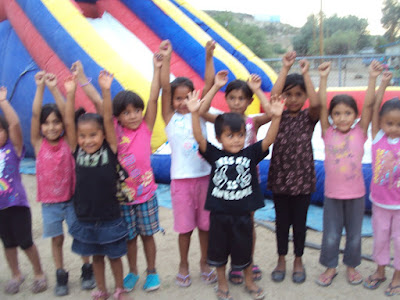 Photo by Sandra Rambler, San Carlos Apache -- Apache youth enjoying the waterslides provided as part of their celebration of Nnee/Ndee Ba'Awolzaa' Hii'Bii'Jii (A Day Made for Apaches) which was formerly known as the Apache Independence Day celebrated annually on June 18 as a declaration of recognition for the San Carlos Apaches. Numerous events have been scheduled including an Apache Ranch Rodeo, co-ed softball tournament, men's and women's basketball tournament and a horseshoe tournament and booths will be available for vendors.
Nnee/Ndee’Ba’Aweolzaa Hii’Bii’Jii (A day made for Apaches) Celebration, June 18, 2017

SAN CARLOS, Arizona –The annual gathering to celebrate the tribal holiday “Nnee’Ba’Awolzaa Hii’Bii’Jii” will be held on Sunday, June 18th on the lawn of the new Mitchell Hoffman Tribal Administration building downtown San Carlos, Arizona.  In conjunction with the festivities, an Apache Family Ranch Rodeo will be held at the Bob Key Memorial Rodeo Grounds, co-ed softball, basketball and horseshoe tournaments with other events. Meanwhile, the winner for the June 18 Naming Contest was announced by Vice Chairman, Tao Etpison.  The winner was Lacey Jordan, tribal member from the Seven Mile District.  Her entry was, “Nnee ba’awolzaa Hi’bi’jii” which means, “A day made for Apaches.” Vice Chairman Etpison also announced the winner for the logo contest which was Myron Starr, tribal member from the Peridot District.  His drawing entailed within a circle one of an Apache Mountain Spirit Dancer, one of an Apache man with long hair and wearing a scarf on his forehead, one of a woman with long hair, two teenagers of a young male and young female all embraced together within the wings of an Eagle.“On June 18, 1934, Congress passed the Indian Reorganization Act which said Tribes can adopt its own Constitutions (Section 16) and/or obtain a Federal Corporate Charter (Section 17),” said Vice-Chairman, Tao Etpison.“Our Tribe did both.  So, this is not really independence but classification or status designation.  Thank you to all the participants for their entries to name the right Apache word or phrase to name this day the June 18th Holiday and for all the entries for the Logo/Design Contest.” “And congratulations to recent winner for the Logo/Design Contest, Myron Starr.” Other planned events include water slides, inflatable movie screens/movie projectors, bouncy castles, live music from Aravapai, Sneezy Boyz, Chaka & Friends, Rez Roots and a live DJ, a fun walk/run, Apache playing cards, fry bread making contests, Apache Koolaid (Berry) contest, traditional attire for tribal members, traditional attire contest for tribal employees, talent contest, essay contest, tortilla making contest, fry bread making contest, bingo, horseshoe tournament, basketball tournament, co-ed softball tournament, traditional singing, arts and crafts displays, vendors, dinner with plenty of food for all followed by fireworks after sundown.” “The Apache Family Ranch Rodeo will be held at the Bob Key Memorial Rodeo Grounds and will start at 6:00 p.m. with Jr. Barrel Racing, Men’s Barrel Racing, Women’s Barrel Racing, Ribbon Roping, 3-Man Team Tying, Chute Dogging, Team Roping, wooly Roping, Calf Roping, Steer Riding, Bull Riding followed by a Jackpot Team Roping and all entries will close at 3:00 p.m.” “The horseshoe tournament and the basketball tournament will be held at the Snyder Burdette Memorial gymnasium.” “The co-ed softball tournament will be held in the Seven Mile Wash District at their softball field.” The celebration will be held downtown San Carlos and part of San Carlos Avenue will be closed all day.  Festivities will start at 12:00 p.m. with the display of the arts and crafts and vendors are all welcome to sell and must show proof of their business license or food vendor license to sell. The Apache playing cards will begin after 12:00 p.m. on the lawn of the old Tribal Administration building where a shade will be provided.  Bingo will begin after 12:00 p.m. on the lawn of the Wellness Center.  The waterslides will be set up from 3:00 to 7:00 p.m.  Dinner consisting of traditional foods will be served. “We welcome everyone, this is your celebration and come and join us.  We also welcome other tribes within our region as well as their tribal leaders,” concluded Vice-Chairman Etpison. For arts and crafts display and vendor set up, contact Terrill Goseyun at the Apache Cultural Museum at (928) 475-2894. For the Apache Family Ranch Rodeo contact Valerie Key at the Office of the Tribal Chairman at (928) 475-1600 or at (928) 200-5479. For the co-ed softball tournament and horseshoe tournament contact Chris Duncan at (928) 200-0092.  The co-ed softball tournament will be held on June 16-18. For the co-ed basketball tournament contact Art Salter at (928) 475-2483. For transportation contact Bernie Kniffin at Nnee Bich’o Nii Program at (928) 475-5011. For bingo contact Nina Bendle at the San Carlos Wellness Center at (928) 475-4875. For the fun walk/run contest contact the San Carlos Diabetes Program at (928) 475-1200. For the Traditional Attire contest contact Mary Jane Tapija at the Tribal Transportation Department at (928) 475-3222. For the Employee Traditional Attire contest contact Santana Dillon at the MHTA building at (928) 475-1600. For the traditional foods contest contact the Apache Language Program at (928) 475-5106. For the video game tournament contact Tolbert Massey at (928) 475-2443. For the essay contest contact Cheryl Mae Haozous at the San Carlos School District at (928) 475-2315. For all other events or general questions, contact Sandra Rambler, Office of the Vice Chairman at (928) 475-1600 or (928) 961-1238. 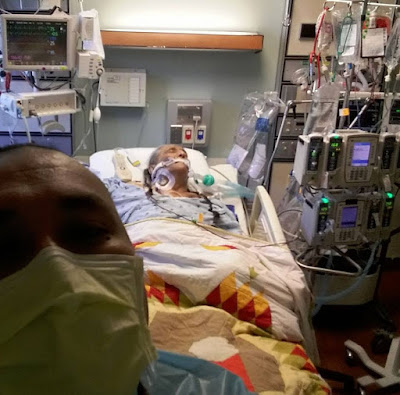 Asking for Prayers for Strength and Healing for the Great Dr. Lehman L. Brightman. Lee is back in the Intensive Care Unit Fighting for his Life.

Indigenous Scholar, Korean War Veteran, Professional Football Player, & Resistance Leader
Lehman L. Brightman is a Sioux and Creek Indian who was born on the Cheyenne River Sioux Reservation in South Dakota. He is the father of three boys -- Lehman Jr., Gall and Quanah -- and currently lives in Walnut Creek, California. Professor Brightman is the founder and National President of United Native Americans, Inc. a non-profit Indian organization formed in 1968, to promote the progress and general welfare of American Indians. In his capacity as President of UNA Mr. Brightman has testified in two U.S Senate Hearings on the deplorable conditions of Indian boarding schools and hospitals on reservations. And led investigations of seven Indian boarding schools and three Indian hospitals due to the poor service and abusive treatment of Indian people. He is a former football and track star at Oklahoma State University where is earned a B.A. Degree, he has an M.A. Degree from the University of California at Berkeley. Mr. Brightman is an ex-Marine and served one year in the Korean conflict where he was wounded in action. He was a disinterested student going through the motions during high school and college in order to play football. However, when be joined the Marines, he found a renewed sense of purpose. "When I came back from the Marine Corps, I had straightened up," he says. "It taught me to be responsible. Most people who served in the Marines are proud of it. Before the Marines, my life wasn't structured. I've lived my whole life since structured, and I learned that from the Corps." USMC, Korea 1951 He established and coordinated the FIRST Native American Studies Program in the United States at UC Berkeley in 1969, and has since taught at the University of California in San Diego, Sacramento State University, and Contra Costa College in San Pablo, California. Brightman is the author of numerous articles on the history of Indian Education and federal boarding schools. He is the former editor of THE FIRST National Indian newspaper called Warpath, and was involved in the occupation of Alcatraz, and the Take-Over of Wounded Knee, and Led the Take-Over and Occupation of Mt. Rushmore in South Dakota in 1970. He was one of the national coordinators of the Longest Walk in 1978, and the Long Walk for Survival in 1980. At the present time Mr. Brightman is writing a book on the history of the Indian Civil Rights Movement from the 1960's to the present. Contact him at UNA's Home Office at (510) 672-7187 or at
http://unitednativeamericans.weebly.com/
VANDERBILT Television News Archive
http://tvnews.vanderbilt.edu/
They Have 3 items where the Title or the Abstract contains the phrase "Lehman Brightman".
1 07/14/1978 Indians' Washington, DC Protest Evening News CBS 05:52:40 pm 01:20
2 09/02/1970 Mt. Rushmore / Indian Claim Evening News CBS 00:17:30 am 03:50
3 10/09/1969 Indian Rights / New Mexico Evening News NBC 00:20:40 am 02:50

A leaked document from the Bureau of Land Management reveals the Trump administration's new push to prioritize drilling and coal mines on public lands. The BLM is pushing swift approvals for oil and gas leasing, pipelines and powerlines, according the documents leaked from the Trump Administration.
The documents reveal the involvement of law enforcement in this priority for widespread rape of Mother Earth, and seizure of natural resources by private corporations.
The United States government's use of militarized police, working in collusion with mercenaries including TigerSwan, employed by Dakota Access Pipeline, which began during the Obama administration, was just revealed from documents leaked to The Intercept. 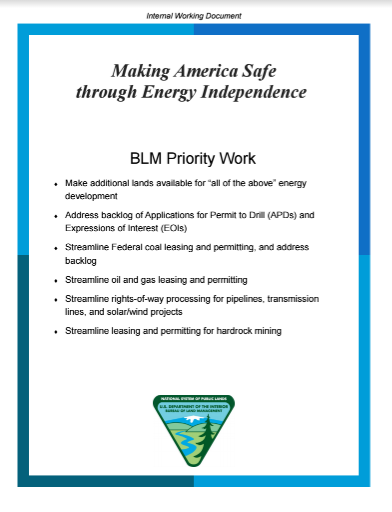 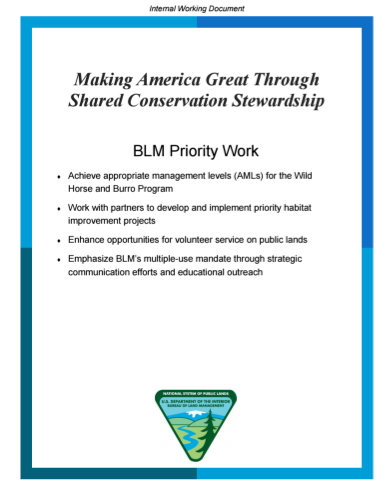 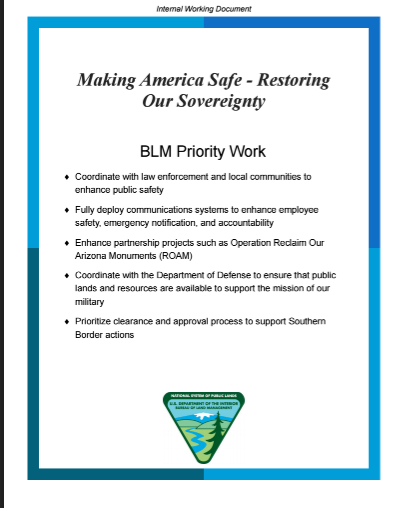 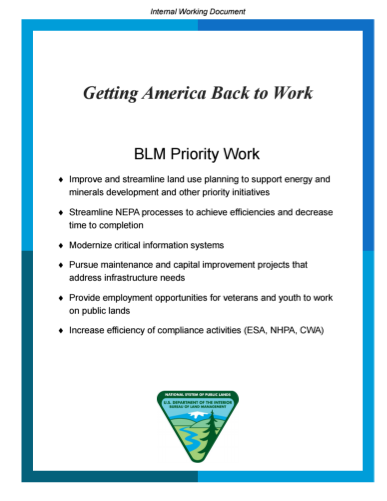 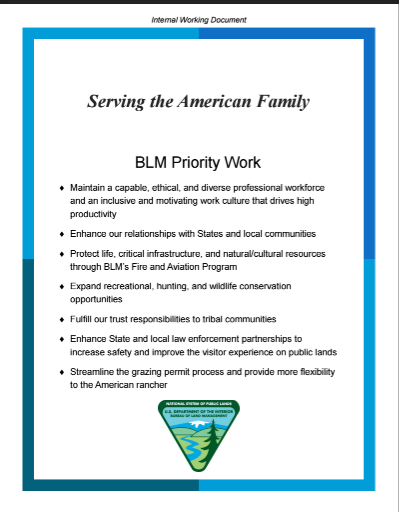