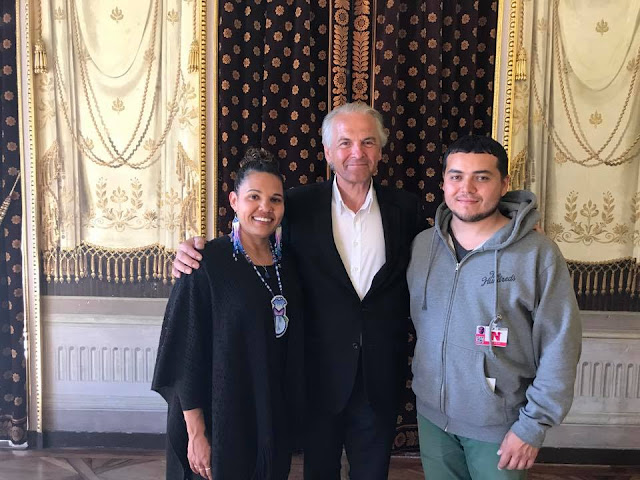 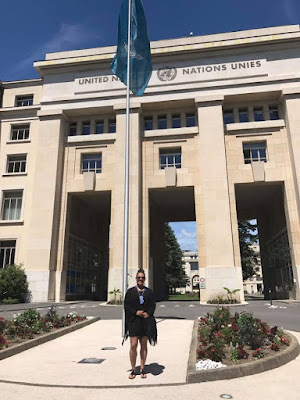 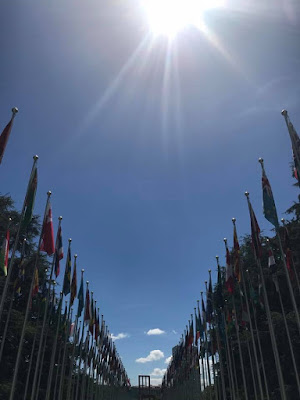 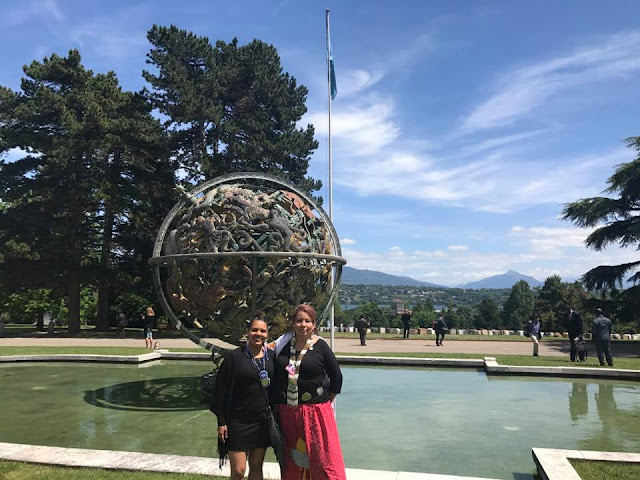 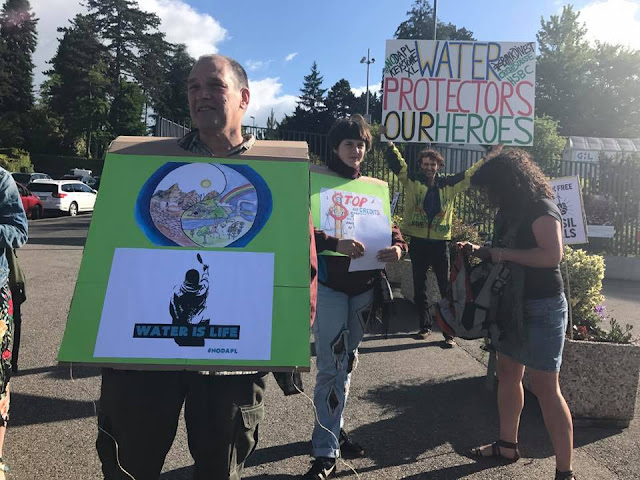 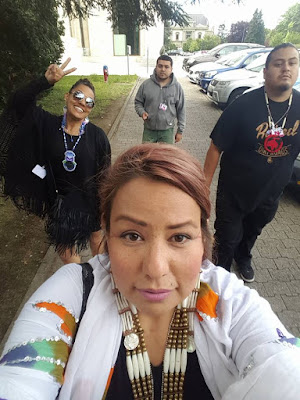 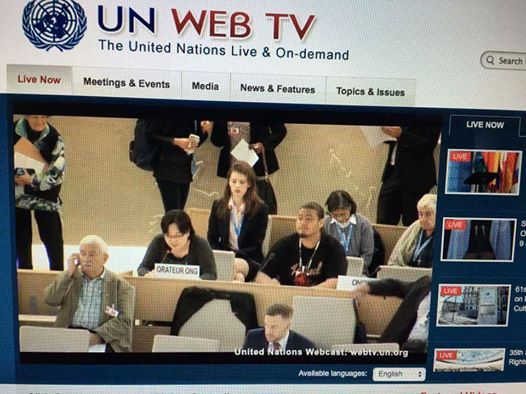 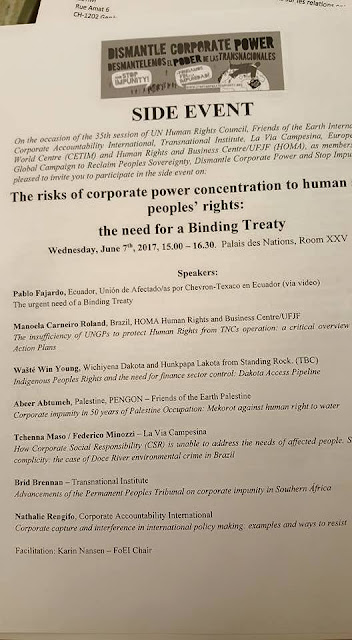 GENEVA -- Water Protectors from Standing Rock camps addressed the United Nations General Assembly of the Human Rights Council, spoke on panels, and met with the Mayor of Geneva today, during their 11 country tour of Europe. The team is urging divestment in fossil fuels, and specifically the Dakota Access Pipeline, while speaking out on the need for clean energy and respect for Indigenous rights.
Rachel Heaton, Muckleshoot from Washington State, said, “Today Rafael and I met with the Mayor of Geneva while Wasté Win and Nataanii both spoke at the UN. We are all discussing the various issues that impact us as Indigenous people and building allies here in Europe to help support the fights at home. I have to say this has been a productive day so far."
Waste Win Young, Dakota Lakota from Standing Rock said Nataanii Means, Dine' Lakota from Chinle on the Navajo Nation, gave a 2 minute intervention before the U.N. General Assembly, on the right to assemble. Rachel and Rafael Gonzalez, Dakota from Minneapolis, meet with the mayor.
Rachel addressed the United Nations General Assembly, then another panel and met with the Mayor of Geneva.
“The police threatened to take down the tipi for us handing out flyers for our panel this morning,” Waste Win Young said.
The team of water protectors led a shutdown of Credit Suisse yesterday, urging divestment in Energy Transfer Partners, owners of Dakota Access Pipeline, and a halt to the bank's involvement of the ongoing genocide of corporations which violate Indigenous rights, ignore Treaties and poison the water and earth recklessly.
Read more:
http://bsnorrell.blogspot.com/2017/06/germany-and-switzerland-standing-rock.html
at June 08, 2017 No comments:

Please post & distribute.
MNN. June 7, 2017. The “Alliance” showed up at Kanesatake to assist in the flooding. The following day the affiliated “Storm Alliance” appeared at the Canada-US border to monitor crossing of immigrants, whom they threatened and terrified.

They have illegally put themselves under the kaia-nereh-kowa, great peace, by using our symbols. They are using our warrior flag to promote hate. Also, their logo is of a warrior with the caption, “BETTER DEAD THAN RED”.
The Storm Alliance is a secretive ultra right non-native group pretending to be our supporters. Like us they are against illegal immigration. We onkwe-hon-weh do not recognize the illegal Canada-US border when we realized that the same 13 families ran everything on both sides of the “imaginary line”.
They are well-built individuals and stand very straight just like cops. They wear white shirts with the red Knights Templar cross on it. Their funding source is unknown.

The members are descendants of those who left Europe for freedom.
They are allied with “The New Order of Templars of Quebec”, and other Christian-oriented crusader groups. Piggy backing on our activities is for publicity and to give the appearance of not being racist. They are affiliated with pro-Trump groups in the US. Chapters are being set up throughout Canada for border surveillance on Canada Day, July 1.
They appear to be crusading against the Arabs, to enhance the Knights Templar, who were behind the genocide of over 100 million of our people. They are the white serpent of ancient legends.

NON NON NON
When they carry our warrior flag they carry the responsibility to “carry the burden of peace upon their shoulders”.
In 1968 the onkwe-hon-weh and Chicanos met with Rev. Ralph Abernathy, who replaced the slain Martin Luther King. They were in Washington DC at the “Poor People’s Camp”. Our image was being used in their marches as if they spoke for us.
We presented a letter explaining our position, that we supported their demands for civil rights and equality with the whites. We wanted our lands, treaties, languages and control of our lives. A gain for them would be a loss for us.
We emerged from the tent together for the press conference. They blocked us out and spoke for us. We handed out copies of the letter and walked away. Afterwards they did stop appropriating our image.

STORM ALLIANCE UNIFORM DESIGNED IN PAREE!
The presence of the Alliance in our midst is confusing the public. The war chief has the duty of protecting our symbols from misuse.
Association with our symbols is creating the false mind set that they have consulted with us, when they have not.

They have illegally usurped our land by not following the te-io-hateh, the two row wampum, to live in peace with us. Trying to steer one or the other vessel is a direct violation of the contract.
We will organize ourselves as we see fit. Secretive outside agitators are not welcome.
Alice Cooper just sings that we are all living in a nightmare: “Welcome to my nightmare. I think your gonna like it. I think your gonna feel you belong. A nocturnal vacation unnecessary sedation, you want to feel at home because you belong. Welcome to my breakdown. I hope I didn’t scare you. That’s just the way we are when we come down. Welcome to my nightmare …”
Mohawk Nation News kahentinetha2@yahoo.com for more news, to donate and sign up for MNN newsletters, go to mohawknationnews.com More stories at MNN Archives.  Address: Box 991, Kahnawake [Quebec, Canada] J0L 1B0 or original Mohawk music visit https://soundcloud.com/thahoketoteh
https://www.youtube.com/watch?v=2utsjsWOWUA This onkwe-hon-weh means what he says.
https://welovethiscoast.wordpress.com/2017/05/06/its-not-really-canadas-150th-birthday/ SO WHAT IS CANADA CELEBRATING?