Where have you gone my frined

The year was 1995, and Jose Matus, Yaqui, was on that Indigenous delegation to Chiapas. We flew, road in the backs of trucks with AK47s pointed in our faces and hiked up mountains.
Jose distinguished himself by refusing to be part of the mass Catholic baptism of Mayans in the villages.
We spent our time on the mountain, with the Zapatistas who lived in a village, sleeping in huts, and a school building. We ate tortillas of fresh corn cooked in banana leaves. We celebrated beneath a single lamp as we heard of the movement for dignity and autonomy.
At night there was the sound of the shortwave. The resistance was a little over one year old. Marcos and the Comandantes were out there somewhere in the mountains, in the jungles. A helicopter hovered overhead, already the military had assassinated people in the village above us, the people who grow corn and coffee with their hands.
That was when I first met Jose Matus, Yaqui spiritual leader.
In the years that followed, I went with Jose to the Yaqui villages in Sonora, near the coast, and listened to his family play music, and speak of struggle and survival.
During those years, Jose made the long journey, about a six hour drive south of Tucson, to the villages to bring back the spiritual leaders who maintained the ceremonies in southern Arizona. The Deer Dancers. The Pascoles.
When Bolivia President Evo Morales put out the call for the Conference on Climate Change and Mother Earth in Cochabamba in 2010, we made plans to go. A generous man, Peter, paid for Jose to travel to Bolivia for the gathering.
As it turned out, Jose and I departed from the same plane in La Paz, Bolivia, and somehow shuffled through immigration.
Then, I had a heart attack. It was Jose who went for medicines for me, and somehow I survived, at least somewhat, for the conference. He took me for food and watched out for me during those days.
With Jose, there was always laughter. That sort of laughter where everyone knows this secret joke.
In the years that followed, Jose continued the Ceremonies, and worked hard to continue gatherings for the Indigenous Alliance without Borders.
All of our friends know these words are inadequate and do not do justice to this Long Road, how we all lived, struggled and survived.
Today, my friend Jose passed to the Spirit World.
Where have you gone my friend.
I'm hoping that this journey, like all the others, will be a grand one, and take you in peace to where you need to go. With love and light.
-- Brenda

In 2008, as we gathered on Western Shoshone land, Jose shared these words with Indigenous.
Here's an excerpt from the article I wrote, the words of my friend.
Yaqui ceremonial leader Jose Matus describes the crisis at the US/Mexico border, where the border wall and Homeland Security's increased restrictions violate lifeways present since time immemorial.
Matus said Homeland Security's increased border restrictions are interfering with the Yaquis ability to preserve their culture and ceremonies.Matus, speaking at the Indigenous Environmental Network’s Protecting Mother Earth Conference on Western Shoshone lands, said Yaqui in the United States are faced with the loss of their language, Hiaki. The declining number of Yaquis speaking the language is affecting the Yaquis ability to maintain their ceremonies.Matus said one of the ways Yaqui maintain their ceremonies is by bringing in Yaqui from Mexico who are well-versed in the Yaqui language, knowledge and ceremonies.Following the request of Yaqui elders in 1973, Matus began his 35-year effort to maintain the Yaqui ceremonies in the US by bringing in Yaqui ceremonial leaders from Sonora, Mexico, for temporary stays for ceremonies.However, in recent years, the increased restrictions by Homeland Security and racist attitudes and migrant xenophobia in the US has resulted in increased legal obstacles.“Now, Homeland Security is getting very, very strict,” Matus told the gathering of more than 700 people from the Americas on Western Shoshone land at South Fork, Nevada, July 17 -- 20, 2008.Matus said that earlier he was able to work with border officials to get ceremonial leaders across the Southwest borders. “As time went goes by, legislation changes and attitudes change, including the anti-immigrant hysteria.”Matus said the fight against terrorism created more obstacles. “That has created more obstacles. That has affected all the people who have relatives in Mexico.”The Indigenous Alliance Without Borders is now working Akimel O’otham in Gila River, Arizona, some O’odham in Mexico, Raramuri/Tarahumara in Mexico, the Yaqui Nation in Arizona and other Indigenous Peoples whose rights are being violated by border rules and border wall construction.The Indigenous Alliance Without Borders was created in 1997 in response to harassment of Indigenous Peoples crossing the border. Border agents were violating and destroying ceremonial items and frightening and intimidating women, children and elders.“We have tried to set up permanent border crossing rights for the Yaqui, Gila River Pima and Raramuri.” Matus said the alliance recently began working with Tewa from El Paso, Texas, where the border wall construction is now destroying cultural rights and sacred places.“The wall itself is a lethal weapon that the US government is using to kill thousands of undocumented crossers.”Matus said the border wall is destroying the environment, sacred sites and the connection between relatives in Mexico and the United States.“Now they are destroying and dividing the Tewa and Kumeyaay ceremonial grounds,” he said of the Tewa in the region of El Paso, Texas, and Kumeyaay, in California and Baja, Mexico.Matus said the alliance is examining possible legislation to ensure border crossing rights. However, he said Indian Nation governments need to support border crossing rights in order for legislation to pass in the United States. At the same time, the United States government is intimidating tribes to prevent them from exercising their rights at the border.“We are all terrorists as far as they are concerned. They put us through all these obstacles as we try to cross that border," Matus said.While Indigenous Peoples are attempting to maintain their culture and ceremonies, they are unjustly targeted.“For national security reasons, we can not bring our elders across the border for ceremonies,” Matus said.

Copyright Brenda Norrell, may not be republished without permission, or used for commercial gain.
at December 03, 2017 No comments: 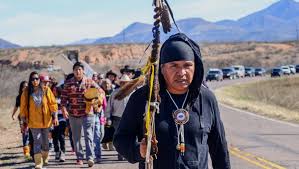 Washington, D.C.: On Monday, December 4, 2017, Apache Stronghold, an Arizona-based nonprofit of Western Apache families and other Indigenous peoples, will make the journey to Washington, DC, to join and support the "Poor People's Campaign: A National Call for Moral Revival."

Please attend the press conference and mass meeting, learn about how to get involved, and find a way to support work of Apache Stronghold and join the Poor People's Campaign for our times.

In recent battles to protect their sacred and ecologically unique lands, groundwater resources, riparian habitats, and endangered species against both U.S. legislators and multinational mining companies, the San Carlos Apache Tribe has come up short. In 2014, as part of a must-pass $500 billion omnibus military funding bill, Arizona politicians sneaked in a rider to give away 2,422 acres of public lands to a $72.9 billion company, Rio Tinto—despite the fact that unemployment on the San Carlos Apache reservation is at 67 percent. According to Apache Stronghold founder Wendsler Nosie, "This is where we say, 'Enough is enough. No more.'"

Apache Stronghold will add volume to the collective voice of the new Poor People's Campaign for, as Rev. Dr. Martin Luther King, Jr. wrote in 1963,

Our nation was born in genocide when it embraced the doctrine that the original American, the Indian, was an inferior race. Even before there were large numbers of Negroes on our shores, the scar of racial hatred had already disfigured colonial society. From the sixteenth century forward, blood flowed in battles of racial supremacy. We are perhaps the only nation which tried as a matter of national policy to wipe out its Indigenous population. Moreover, we elevated that tragic experience into a noble crusade. Indeed, even today we have not permitted ourselves to reject or feel remorse for this shameful episode. Our literature, our films, our drama, our folklore all exalt it.

To learn about Apache Stronghold and its efforts to preserve Western Apache culture and religious freedom, and to defend Western Apache sacred places such as Dził Nchaa Si'An and Chí'chil Biłdagoteel, visit:

To learn more about the Poor People's Campaign, visit: poorpeoplescampaign.org