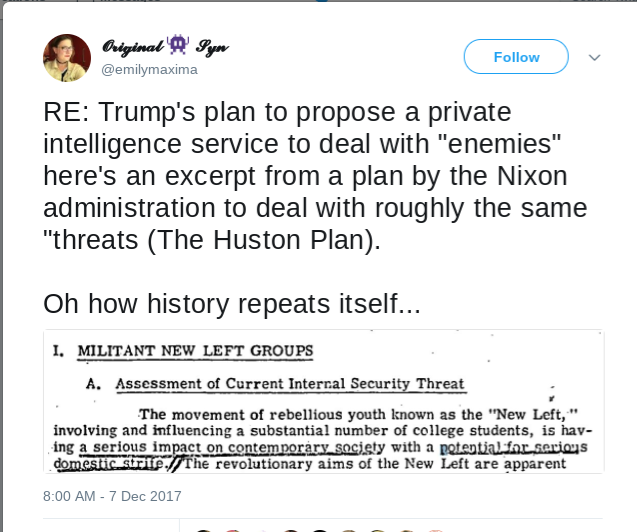 The Trump administration's plan to hire private spies to stalk enemies is not new. COINTELPRO and Operation Chaos, during the Johnson and Nixon administrations, carried out the same Presidential stalking.

Russell Means, Lakota, the American Indian Movement, and other Native Americans were stalked during Operation Chaos, which is exposed less often than COINTELPRO.

Buffy Sainte Marie was among those targeted by U.S. presidents. Buffy said she found out that President Johnson was responsible for putting her out of the music business in the United States.

Buffy said even shipments of her records were disappearing. She discovered that she was targeted because of her anti-war stance, and song Universal Soldier.

"I found out ten years later, in the 1980s, that Lyndon Johnson had been writing letters on White House stationary praising radio stations for suppressing my music," Buffy said at Dine' College on the Navajo Nation in 1999. http://bsnorrell.tripod.com/id99.html

Now, the Intercept reports: THE TRUMP ADMINISTRATION is considering a set of proposals developed by Blackwater founder Erik Prince and a retired CIA officer — with assistance from Oliver North, a key figure in the Iran-Contra scandal — to provide CIA Director Mike Pompeo and the White House with a global, private spy network that would circumvent official U.S. intelligence agencies, according to several current and former U.S. intelligence officials and others familiar with the proposals. The sources say the plans have been pitched to the White House as a means of countering “deep state” enemies in the intelligence community seeking to undermine Donald Trump’s presidency. https://theintercept.com/2017/12/04/trump-white-house-weighing-plans-for-private-spies-to-counter-deep-state-enemies/

Russell Means said Indian Nations are "living in the belly of the monster, and the monster is the United States." 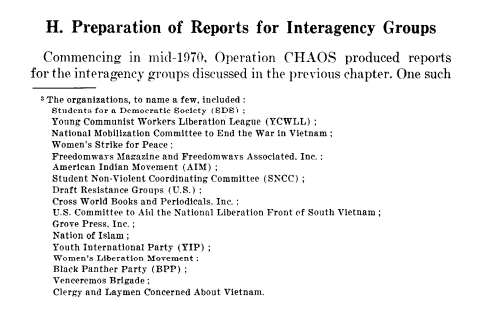 During an interview at Dine' College, Buffy Sainte Marie said President Johnson put her out of the music business because of her stance against the Vietnam war and song, 'Universal Soldier. 'http://bsnorrell.tripod.com/id99.html

The US cables reveal that the State Department was focused on spying on Russell Means.
The US State Department took notice and sent out a cable when Russell Means, Lakota, said a delegation to Eastern Europe planned to "ram the human rights issue down President Carter's throat." https://wikileaks.org/plusd/cables/1977STATE226024_c.html
Means promised to expose the genocide of American Indians in Europe and seek support for the ongoing "foreign occupation" in the US. The US was also concerned that the delegation to Europe in 1977 would use "Iroquois passports," according to the US spy cable.
One document in Wikileaks shows that after Wounded Knee, the American Indian Movement was planning an Indian Treaty Convention near Mobridge, South Dakota, in 1974. The US was concerned that Bolivia and Mexico would attend. "The USG (United States government) would regard official participation in this event by any foreign government as inappropriate." The US continued to try and find out who was coming. https://wikileaks.org/plusd/cables/1974STATE101850_b.html
The US State Department was monitoring Russell Means, as shown below.
https://wikileaks.org/plusd/cables/1977STATE237305_c.html 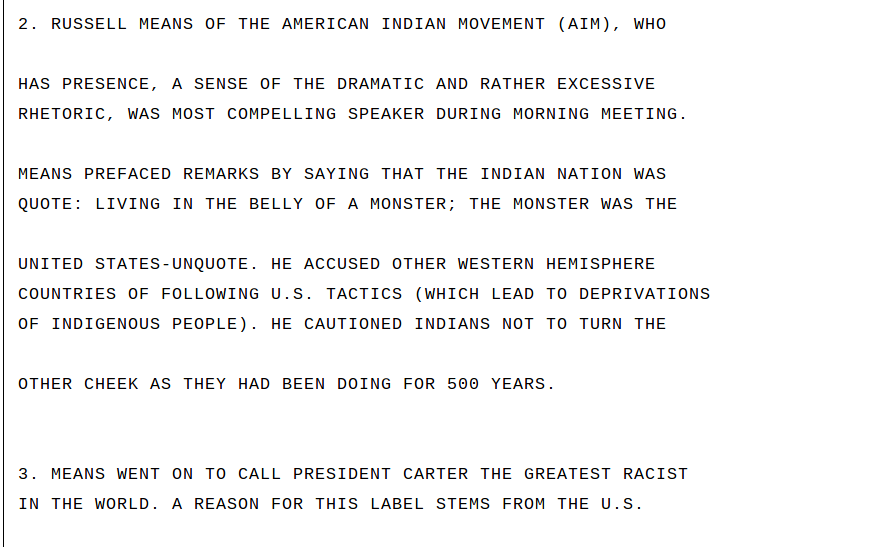 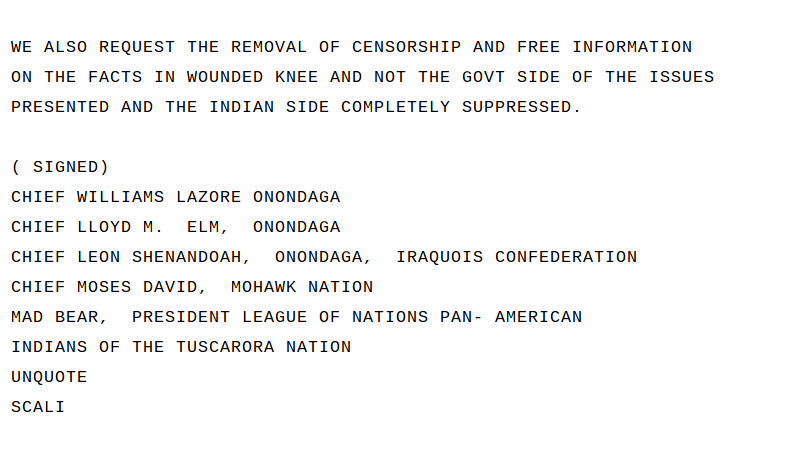 For permission to repost this article contact brendanorrell@gmail.com
Copyright Brenda Norrell
at December 07, 2017 No comments: 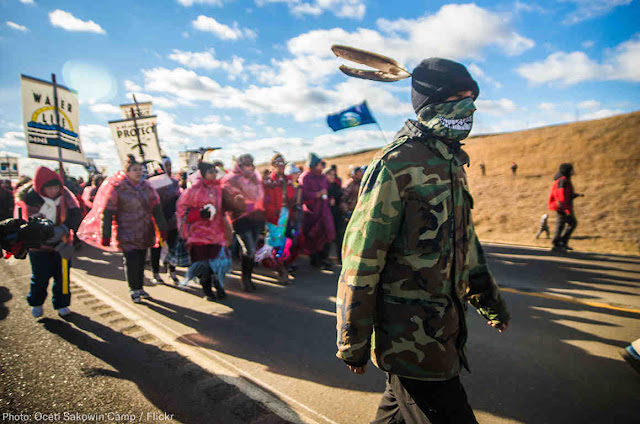 If you want to experience 2017 in a nutshell, check out the billion-dollar lawsuit filed by an oil and gas company against Greenpeace and other environmental groups for their roles in the Standing Rock protests.In a 231-page complaint filed by Donald Trump’s old law firm, Energy Transfer Partners, the company behind the Dakota Access Pipeline, claims that Greenpeace and its partners are engaged in a criminal network of fraud and misinformation. The paranoiac complaint, which includes references to “wolfpacks of corrupt” environmental nongovernmental organizations and describes Greenpeace as a “putative Dutch not-for-profit foundation,” would be amusing if it weren’t so dangerous.It leverages the RICO Act, a statute that was meant for mob prosecutions, and defamation law to wage a scorched-earth campaign against nonprofits that spoke out against the pipeline’s construction near the Standing Rock Sioux Reservation in North Dakota. Fortunately, as we argue in a friend-of-the-court brief filed yesterday with a coalition of public interest groups, the First Amendment prohibits companies from suing their critics out of existence.ETP’s lawsuit rests on two theories, neither of which holds water.First, it argues that Greenpeace and the other defendants are engaged in a broad-based conspiracy to defraud the public by defaming the company. But many of the statements ETP alleges as false or defamatory — such as website posts stating that the tribal consultation and environmental review were rushed and lacked proper consultation — are clearly protected opinions on matters of vital public concern. Other offending statements, such as a post by the Sierra Club’s Executive Director stating “it has never been a question of whether a pipeline will spill but only of when the next disaster will happen,” don’t seem very unreasonable, given last month’s 5,000-barrel spill at the Keystone pipeline in South Dakota. ETP can’t demand punishment for this kind of core political speech just because it doesn’t like the message.ETP’s second legal argument fares no better. It argues that, because Greenpeace and the other defendants are allegedly engaged in a vast “illegal Enterprise” to persecute ETP, they should be held liable for the allegedly unlawful actions of totally unrelated groups that also happen to oppose the Dakota Access Pipeline. For example, ETP alleges that the hacktivist group Anonymous is a “front” for Greenpeace and the other defendants, but this wild accusation is based on nothing more than the observation that Anonymous targeted the same entities being protested by the defendants.DROP CHARGES AGAINST PEACEFUL PROTESTERSTAKE ACTION NOW
If accepted, ETP’s theories would make any advocacy group liable for the actions of every fellow traveler, no matter how disconnected. For example, if the ACLU filed a lawsuit challenging a government surveillance program, ETP’s theory of liability could make us civilly, and perhaps even criminally, liable for the actions of any hacker that attempted to take down the program.If the courts have any sense, this case won’t get to trial. But ETP doesn’t need to win in court to do major damage. Defending major lawsuits like these against deep-pocketed corporations is extremely expensive, time consuming, and stressful, particularly for cash strapped nonprofits. Even if they survive, advocacy groups have to divert serious resources away from their missions to litigate these issues. That’s why it’s important for courts to dismiss these cases early, before things get really expensive.Protesters and advocacy groups should never have to fear the weight of groups like ETP as a condition for expressing their First Amendment rights. The court should see this lawsuit for what it is and toss it.
at December 07, 2017 No comments:

Photo by Swan American Horse Jasilyn Charger said, "We run for the water and land for my relatives who have passed and those yet to com...