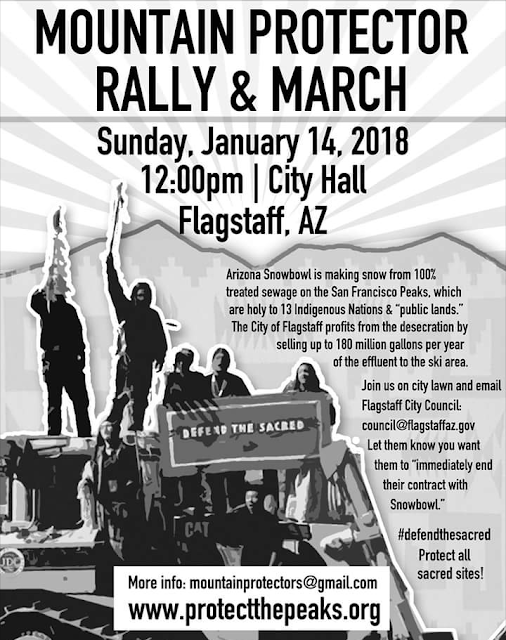 FLAGSTAFF, Ariz. — Arizona Snowbowl ski area is entering into its 5th year of making fake snow from 100% treated sewage on the San Francisco Peaks, which are holy to 13 Indigenous Nations. A Mountain Protector Rally is being held the day before Martin Luther King Jr. Day to call on the City of Flagstaff to end their contract to sell up to 180 million gallons of treated sewage per year to the ski area for snowmaking purposes.

"Snowbowl is perpetuating cultural genocide," stated Bonn Baudelaire, a volunteer helping to organize the rally and march, "The City of Flagstaff is profiteering off of this egregious violation by maintaining a contract to sell millions of gallons of treated sewage per year to Snowbowl ski area for making fake snow. Our human rights, our religious freedom is continually violated by this City that claims to support social justice and environmental integrity. If they're willing to march in honor of Dr. King's legacy, they should immediately end their unjust contract with Snowbowl. Snowbowl has been open since Nov. with 100% fake snow yet the economic benefits they claimed would precipitate are non-existent. This City is clearly willing to sacrifice Native culture for a racist business located outside City limits and for mythical economic gain."

In August 2011 an Urgent Action / Early Warning Complaint was filed with the United Nations (UN) CERD Committee, on the desecration of Sacred San Francisco Peaks, Arizona. The Committee on the Elimination of Racial Discrimination, known internationally as the CERD Committee is charged with monitoring compliance with the International Convention on the Elimination of all forms of Racial Discrimination (ICERD).

CERD Chairperson Alexei Avtonomov responded to the complaint with a letter to the U.S. in March 2012 stating, "The Committee requests information on concrete measures taken to ensure that the sacred character of [the San Francisco Peaks] for indigenous peoples are respected, including the possibility of suspending the permit granted to the Arizona Snowbowl, to further consult with indigenous peoples and take into account their concerns and religious traditions."

Arizona Snowbowl operates their private business on the Peaks under a special use permit from the US Forest Service. The Forest Service approved ski area expansion and treated sewage snowmaking in 2005. Lawsuits by environmental groups and Indigenous Nations ultimately failed and Snowbowl started making treated sewage snow in 2012. The Hopi Tribe is currently in litigation with the City of Flagstaff over the city's contract to sell wastewater to Snowbowl. The City's contract with Snowbowl was administratively renewed in 2014 for 20 years. Neither Indigenous Nations or the public had input on the process.