MANDAN, North Dakota: A change of plea hearing has been scheduled for Michael Markus, who is known as Rattler, after reaching a non-cooperating plea agreement with prosecutors. Under the agreement, the government will drop the most serious charge and both parties will recommend a sentence of 36 months for the one remaining charge of Civil Disorder.This is a non-cooperating agreement relating only to Rattler’s own actions and that does not require any testimony or information about anyone else.Rattler was charged with Civil Disorder and Use of Fire to Commit a Federal Felony Offense, arising from October 27, 2016 protests at Standing Rock. Under this plea agreement, the Use of Fire charge – which carries a mandatory minimum sentence of 10 years and the possibility of up to 15 years in prison – will be dropped entirely. Prosecutors and the defense will then jointly recommend a sentence of 36 months on the Civil Disorder charge, although the judge does have the have the authority to go as high as five years. There is no minimum sentence. If the judge decides not to accept the agreement the case will continue to trial on both charges.Rattler made the difficult decision to enter into the plea agreement as he was nearing trial in Bismarck North Dakota, a region that has demonstrated severe prejudice against Water Protectors. A commissioned survey found that 77% of potential jurors in Morton County and 85% in Burleigh County had already decided that defendants were guilty and many potential jurors have close connections to law enforcement or the oil industry.Given these limited options and high stakes, Rattler decided to enter into a plea agreement that does include significant prison time but removes the risk of being convicted and sentenced to a 10 year mandatory minimum with a possibility of up to 15 years.Rattler is an Oglala Lakota who was raised on the Pine Ridge Reservation in South Dakota. He is a Sundancer and a ceremonial pipe carrier in the Lakota spiritual tradition and a Marine Corps veteran of the Gulf War. At Standing Rock he took on significant responsibilities caring for and protecting others in camp.Links: 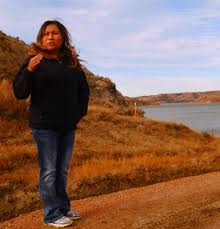 I attended the Department of Health’s hearing for a minor source synthetic air quality permit for Davis refinery on January 17 in Dickinson. I was one of many people who oppose the fact that Meridian has the audacity to want to site a refinery near Theodore Roosevelt National Park.

I can speak from experience; my community is impacted by oil and gas. I’ve seen every tactic that companies use when they want to develop an area.

I’ve seen the devastation that a refinery can bring to communities and can see the inevitable desecration that will be brought to our only National Park.

First, I and every speaker in attendance that oppose the refinery are not paid. It’s sad that pro-refinery folks resulted to insulting people who had every right to testify.

The public comments ran about 4 hours long, with overwhelming opposition (30-12) to industrializing the perimeter of TRNP.

I’ve learned that when large industries come into small communities, they intentionally divide to conquer. Citizens that were once friends and neighbors are pitted against each other over false promises such as jobs, and money. In my experience, the pie in the sky is only for a select few and the external costs and damages are on the shoulders of everyone else.

I urge the DOH to deny this air permit, it’s foolish to think that it’s our right to allow a company with no long-term interest in North Dakota to compromise our park.

If this company was going to bring such prosperity to the Belfield area, why would they have contingencies on their promises? Such as “once the refinery gets going, THEN you can have a new school.” If they were trying to be honest with the public, they would go through the proper siting permit with the Public Service Commission. Don’t fall for empty promises, big industry cronies lie.
at January 21, 2018 No comments: