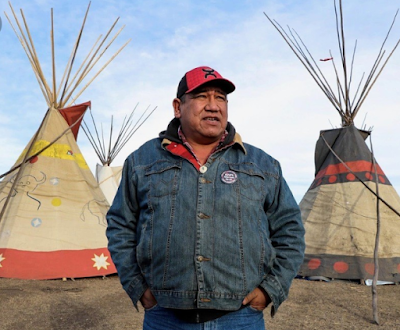 Where are the Indians in the National Congress of American Indians?
When the Sioux Nation sent fourteen delegates to represent us at the first convention of the National Congress of American Indians held in Denver, Colorado, in 1944, it was to protect all tribes from the termination and assimilation policies of the United States. Individual tribes were alone and unprepared for the devastation and cruelty of the post-apocalyptic world in which we were thrust.
When NCAI had first began tribal leaders were able to address the problems of their people to the federal government. Sadly, that time is at an end. I have tried in vain to address NCAI and could only do so when vying for an executive position within the organization.
Voting in NCAI is not based on population representation and does not contribute to an accurate voice of Indian country. The system of membership is flawed and based on how much a tribe has in revenue and not on number of tribal members. In a time when Indian country sorely needs an institution like NCAI, it has been reduced to merely another lobbying venue for corporate interests.
Nothing has been more glaringly obvious of NCAI failures than the decision made by the Bureau of Indian Affairs to effectively terminate the Mashpee Wampanoag nation from federal recognition. This tragedy is against the very purpose for which NCAI was created.
Last July, I sent a letter to the director of NCAI asking for an explanation of their “corporate sponsors.” I never received a response from the director or the organization. I cannot get a response from NCAI about how much corporate money is garnered or even something as simple as the list of tribes participating in NCAI.
I cannot get a response from NCAI about how much money it has received from corporation sponsors, such as Wells Fargo, who is a known investor of the Dakota Access Pipeline, which has brought hardship on our tribes and pain to my people.

When I see the issues with staff members of NCAI, I cannot help but see the symptoms of an infected institution. Members of many tribes have joined NCAI with the hopes of making a difference in Indian country, as I did and hope I can do for my people.
Those who joined NCAI invested themselves to a cause they believe is bigger than them. I agree with those admirable qualities and know that when people with noble ideologies leave in disgust it is because they have been disenfranchised by the leadership.
Today I am asking the Executive Council of NCAI to remove the director of NCAI for failing to protect staff from bad actors and policies. It is important to protect our tribal brothers and sisters from the wolves and not allow them into our camp to prey on us.
Failure to protect one of us is a failure to protect all of us. I also call for a removal of Executive Board membersfor not allowing a transparent process to address issues and failing to protect the Mashpee Wampanoag tribe from the very thing they have sworn to stop. Let us keep corporate interests out of Indian policies and keep Indians in NCAI.