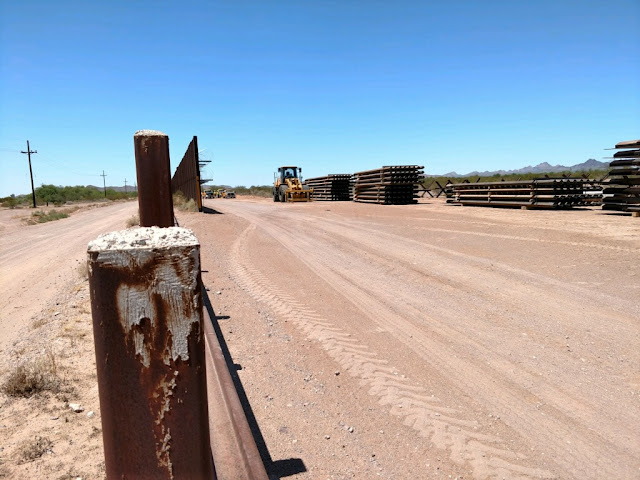 LUKEVILLE, Arizona -- The trucks arrived to destroy the pristine Sonoran Desert at Organ Pipe Cactus National Monument to build Trump's border wall.
Trump quickly gave the $646 million contract to Southwest Valley Constructors, a company in New Mexico.
All laws protecting the wild things and endangered species have been smashed. The area is adjacent to the western side of the Tohono O'odham Nation and near Ajo, Arizona.
The Tucson Sentinel reported today of the work that has started and the concern for Organ Pipe Cactus National  Monument, located west of Lukeville, Arizona.
Laiken Jordahl, a spokesman for the Center for Biological Diversity, said that there was also heavy construction machinery near Quitobaquito Spring, a natural spring in Organ Pipe that is home to a few unique species, and that this was "extremely concerning."

Organ Pipe area has a cultural history of at least 11,000 years.
Among the rare creatures found here is the endangered pupfish.
"The largest body of water at Organ Pipe Cactus National Monument is Quitobaquito springs and pond, home to the Quitobaquito pupfish," writes Wild Sonora.
"The cultural significance of the Quitobaquito area dates to approximately 11,000 B.P. (before present)."The pond is the home of the Quitobaquito spring snail, the Sonoyta mud turtle and the desert caper plant.This is the only spot in the United States where these species can be found naturally occurring," the National Park Service said.
"The desert caper supports the caper butterfly (ascia Howarthi) that is only found coexisting with the plant. The Quitobaquito spring snails are so small that they are hard to find."
"You can sometimes spot the snail, about the size of a grain of black pepper, in the spring-fed streams serving the pond. Quitobaquito is also the only place where the Sonoyta mud turtle is found in the United States and has been deemed a candidate for protection under the Endangered Species Act."
Phoenix New Times reports, "When the Department of Homeland Security announced in May that it planned to build the wall, it offered few details other than that it would be a wall of concrete-filled steel bollard, 18 to 30 feet high and four inches apart. The bollards would sit atop a cement foundation about 10 feet deep and eight inches to a foot wide.
"It gave other agencies and individuals until July 5 to submit public comments on its vague plans, but nevertheless awarded a $646 million contract to Southwest Valley Constructors, a New Mexican company, in mid-May to build the wall. Jordahl took this timing as a sign that the department had no plans to consider the comments anyway."
Tucson Sentinel reports that on May 15, the Defense Department officials also announced that BFBC LLC, out of Bozeman, Montana would receive more than $141 million to design and build similar projects in the El Centro Sector near El Centro, California, and in the Yuma Sector, which straddles the Colorado River and includes parts of California and Yuma County.
The project is expected to be completed by Jan. 31, 2020.
Border wall construction is also underway farther to the west on the Arizona border, near the California border in Yuma, Arizona. This construction targets the Cabeza Prieta National Wildlife Refuge.
At Cabeza Prieta, the endangered Sonoran Pronghorn migrate from Arizona to Sonora, Mexico. The proposed border wall will halt its migrations. Already, the Pronghorn are bombed at the Goldwater Bombing Range and few have survived.
In southern Arizona, three jaguars have been spotted and identified, and the border wall construction will destroy their remote and wild habitat.
The border wall construction proposed is only pieces of a border wall between California and Texas, and will cause irreparable harm to endangered species in the fragile Sonoran Desert.
The Center for Biological Diversity in Tucson has filed an injunction to halt the work and destruction.


Injunction Sought to Halt Trump’s Wall in Arizona
Bulldozers Aimed at Organ Pipe Cactus National Monument, San Pedro River
By Center for Biological Diversity
WASHINGTON— Conservation groups today asked a federal court to block construction of President Donald Trump’s border wall through protected wilderness in Arizona until a judge rules on a pending lawsuit.
Today’s motion for a preliminary injunction, filed in U.S. District Court in Washington, D.C., involves the groups’ July lawsuit challenging the Trump administration’s waiver of dozens of environmental and public health laws to speed border-wall construction in Arizona.
“It’s senseless to let bulldozers rip a permanent scar through our borderlands’ wildlife refuges and national monuments before the court decides whether the waiver is legal,” said Jean Su, an attorney at the Center for Biological Diversity.
“Trump’s ignoring laws and diverting funds to build this destructive border wall. His grotesque barrier would destroy some of the border’s most spectacular and biologically diverse places. We’ll do everything in our power to stop that.”
If the preliminary injunction is granted, wall construction would be blocked until U.S. District Judge Ketanji Brown Jackson rules on the merits of the underlying lawsuit challenging the Trump administration’s waiver authority.
A recent Supreme Court ruling lifted an injunction in a separate case involving Trump’s use of military funds to build the border wall, allowing construction to proceed in Arizona, Texas, and California. Without action from Judge Jackson, wall construction in Arizona could begin later this month.
“Every American should be outraged that the border wall in Arizona will be built across some of our most iconic national wildlife refuges and national parklands,” said Bryan Bird, the southwest representative for Defenders of Wildlife. “If the wall is constructed through these spectacular landscapes it will disrupt migration for animals like the Mexican gray wolf, the jaguar, the Sonoran pronghorn, and the bighorn sheep. It will tear through lands so precious that Congress chose to protect them for all American’s posterity and enjoyment. Defenders will continue to fight to stop this abuse.”
The lawsuit says the Department of Homeland Security lacks authority to waive the Endangered Species Act, National Environmental Policy Act and other laws that protect clean air, clean water, public lands and wildlife in the borderlands.
The department wants to sweep aside these laws to speed construction of border walls through the Organ Pipe Cactus National Monument, San Pedro Riparian National Conservation Area, Cabeza Prieta National Wildlife Refuge, San Bernardino National Wildlife Refuge, Coronado National Memorial and numerous designated wilderness areas. The bollard-style barriers will block wildlife migration, damage ecosystems and harm border communities.
“These most recent waivers of vital environmental and animal-protection laws demonstrate the administration’s continued disregard for wildlife, including the most fragile species that could be pushed to extinction by these projects,” said Animal Legal Defense Fund Executive Director Stephen Wells. “Building a wall that cuts through the heart of vital federally protected forests, wildlife refuges and conservation areas will have devastating effects on these critical areas and the wildlife that calls these areas their home, which is why we are asking the court to immediately enjoin these border wall-related projects.”
The Center and allies have sued to challenge Trump’s emergency declaration, which would fund this border-wall construction. The Center’s first border-related lawsuit ― filed in 2017 in U.S. District Court in Tucson with U.S. Rep. Raúl Grijalva ― seeks to require the Trump administration to do a detailed analysis of the environmental impacts of its border-enforcement program. All of these suits are pending.
A 2017 study by the Center identified more than 90 endangered or threatened species that would be threatened by wall construction along the 2,000-mile U.S.-Mexico border.
Beyond jeopardizing wildlife, endangered species and public lands, the U.S.-Mexico border wall is part of a larger strategy of ongoing border militarization that damages human rights, civil liberties, native lands, local businesses and international relations. The border wall impedes the natural migrations of people and wildlife that are essential to healthy diversity.
August 6, 2019

Study: Trump's Border Wall Threatens 93 Endangered Species
Jaguars, Wolves, Owls Among Those in Harm's Way
By Center for Biological Diversity
TUCSON, Ariz.— President Trump's border wall threatens 93 endangered and threatened species, including jaguars, ocelots, Mexican gray wolves and cactus ferruginous pygmy owls, according to a new study by the Center for Biological Diversity.
The study also found that 25 threatened or endangered species have designated “critical habitat” on the border, including more than 2 million acres within 50 miles of the border.
“Trump's border wall is a disaster for people and wildlife alike,” said Noah Greenwald, endangered species director at the Center. “It could drive magnificent species like the jaguar and ocelot to extinction in the United States.”
The new study identified all threatened, endangered and “candidate” species (those being considered for protection) that have ranges near or crossing the border. These include 57 endangered species, 24 threatened species, 10 species under consideration for protection and two species of concern, golden and bald eagles. Construction of Trump's 1,200-mile wall — along with related infrastructure and enforcement — will have far-reaching consequences for wildlife, including cutting off migration corridors, reducing genetic diversity, destroying habitat, and adding vehicles, noise and lights to vast stretches of the wild borderlands.
“The border wall won't be effective at stopping people seeking a better life from getting to this country, but it will destroy habitat and divide wildlife populations,” Greenwald said. “Building a wall across the entirety of the border would cause massive damage to one of the most biologically diverse regions in North America and would be a boondoggle of the highest order.”
The sections of the border wall that have already been built have had a range of negative effects on wildlife, including direct destruction of thousands of acres of habitat, indirect impacts from noise and light pollution, and division of cross-border wildlife populations like bighorn sheep and jaguars. The border wall would cut through the Cabeza Prieta, Buenos Aires, and several other national wildlife refuges, along with Organ Pipe Cactus National Monument, Big Bend National Park and many other natural areas that, besides acting as corridors for wildlife, are national treasures.
Last month the Center and Congressman Raúl M. Grijalva (D-Ariz.), the ranking member of the House Committee on Natural Resources, sued the Trump administration over the proposed border wall and other border security measures, calling on federal agencies to conduct an in-depth investigation of the proposal's environmental impacts.
The suit, filed in the U.S. District Court for the District of Arizona, is the first targeting the Trump administration's plan to vastly expand and militarize the U.S.-Mexico border, including the construction of a “great wall.”