DEMOCRACY NOW!
January 13, 2020
Watch video
Powerful words by Native women about Keystone Pipeline, Standing Rock, climate change and Indigenous rights. Read the transcript below.
In a related article, a TSA agent pulled the braids of Native attorney Tara Houska and ridiculed her, as Tara was on her way to this event.


Nearly 150 people were arrested on Capitol Hill Friday in a climate protest led by Academy Award-winning actor and activist Jane Fonda. Fonda has been leading weekly climate demonstrations in Washington, D.C., known as “Fire Drill Fridays,” since October. For her last and 14th protest, actors Martin Sheen and Joaquin Phoenix, indigenous anti-pipeline activist Tara Houska, journalist Naomi Klein and dozens more lined up to get arrested as they demanded a mass uprising and swift political action to thwart the climate crisis.
Read more »
at January 13, 2020 No comments: The father of murdered Blackfeet actress Misty Upham said evidence was stolen in the case of the rape of his daughter by a Weinstein executive.

Charles Upham, father of Blackfeet actress Misty Upham, said she was raped by a Weinstein executive at the Golden Globes in 2013, but feared the power of Harvey Weinstein. Misty was found dead at the bottom of a ravine on Muckleshoot land in Washington State, after being missing for 11 days in October of 2014. 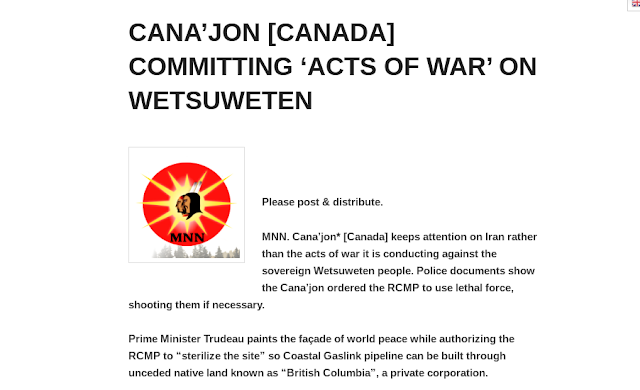