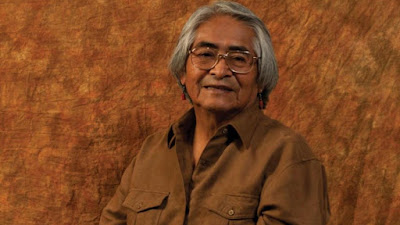 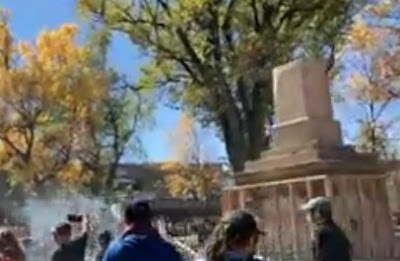 Wow!
Just like that.
With ropes.
Pulled by human hands?
Yeah, I believe it.
I've stood by it. And I can imagine it.
Hand on rope. Pulling. Pulling hard.
Obelisk on a concrete form. Or stone form.
Ropes tough. Hands tough. Numbers of people.
An obelisk of conquest. Spanish first. Americans second.
Power of foreigners. Is not enough. People at present.
Santa Fe residents. A mixture of Americans.
Indigenous. Anglos. Anglos? White people is what's meant.
Indigenous peoples. Locals and from other parts of the Americas.
Pull the ropes harder. Heavy shit. Obelisk and cement and stone.
Pullllll. Yeah, we can do it!
You can do it.
Conquest pulled down.
Take it to the city dump.
Dump it.
Or just leave it and Earth will reclaim it.
You can do it.

Oct 12/20
Indigenous Day 2020
Simon J. Ortiz
Not to be republished/reprinted without permission
Copyright Simon J. Ortiz
The racist obelisk on Santa Fe Plaza was torn down today. Thank you Acoma Pueblo poet and author Simon Ortiz for allowing Censored News to publish your poem.
at October 12, 2020 No comments: