Sadistic Clearwater Sheriff Deputy's Brutal Arrest of Grandmother at Stop Line 3 'He's Breaking My Hand'
Brenda Norrell
Censored News
Update: After her brutal arrest, she was strip-searched and processed in jail. She was then sent to the hospital emergency room and began a hunger strike. She has now been released from jail.
A grandmother was brutally arrested by Clearwater Sheriff Deputy Alexander 'Zander' Yocum, at Firelight Treaty Camp, at an Enbridge Line 3 pump station in northern Minnesota on July 29, 2021.

Deputy Yocum attempted to break her hand, as documented in the video below.

"He's trying to break my hand!"

"I have severe arthritis," the grandmother cried out in pain.

Sheriffs' deputies from throughout the state of Minnesota have swarmed Enbridge's pipeline construction sites where Native American Water Protectors are defending the Mississippi River and local rivers, which are home to wild rice, fish and endangered species.

Law enforcement is protecting the Canadian corporation Enbridge and construction of its Line 3 pipeline for dirty crude oil from Canada.

Fire Light Camp was founded on June 7th by the Anishinaabe exercising their treaty rights where the Line 3 pipeline will cross the Mississippi River in rural northern Minnesota This location is less than ten miles from the Mississippi headwaters. 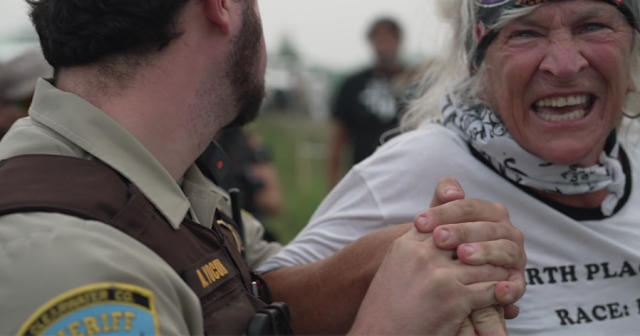 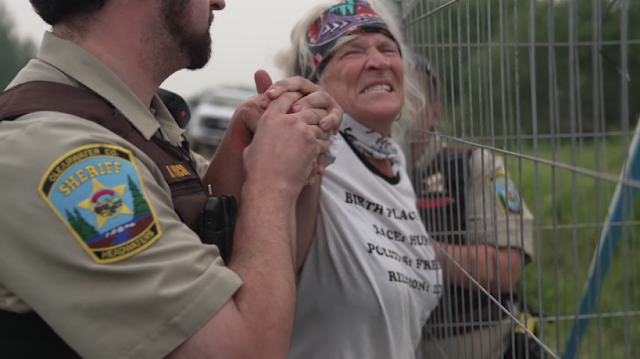 Watch video:
On YouTube at https://www.youtube.com/watch?v=a8IE224Lgrk
Anishinaabe Exercising their Treaty Rights
RISE said in a statement:
Anishinaabe band members have exercised their treaty rights and peacefully occupied a site on the Mississippi headwaters where Enbridge plans to drill its Line 3 pipeline under the river. They have been joined by many non-Indigenous allies who are invited guests.

On June 13th, Enbridge issued a letter alleging that a ”certain group of people” are trespassing on its pipeline easement and demanded that we depart the premises.

We are not a “certain group of people,” but members of various bands of Anishinaabe people with constitutionally guaranteed rights to hunt, fish and gather on lands that we ceded to the United States government.
RISE said:
Throughout the multi-year Enbridge Line 3 review process, Enbridge and the state of Minnesota have remained willfully ignorant of our rights established under the treaties of 1837, 1854 and 1855. Our treaty rights are the supreme law of the land, according to Article VI of the U.S. Constitution. These take precedent over any state-approved easement or trespass laws.

We dispute many of the assertions in Enbridge’s June 12 letter.
Enbridge continues to call this a “replacement project.” It is not. It is a new and larger pipeline along a new route. That’s not a replacement.

Enbridge’s letter states that “trespassers claimed to be present on the site to conduct religious ceremonies.” It was not a claim but a fact. The ceremony is ongoing. Our people continue to fast and pray for the protection of the water and the land.

Enbridge’s letter said we have “caused significant damage to property and equipment.” This is not true. There was nothing here when we arrived other than a wood plank road that was already carved up by the coming and going of heaving equipment. There was no equipment here to damage.

Enbridge’s letter states that we are “endangering the health and safety of construction workers and the trespassers themselves.” Speaking for ourselves, we do not feel endangered. Nor have we seen any Enbridge workers since we arrived who might be endangered. This is corporate hype to create fear; our presence is peaceful nor are we trespassing.

Truth is, it’s Enbridge and its workers who have endangered the health and safety of our Indigenous peoples. Enbridge began Line 3 construction while the pandemic was still out of control. Indigenous peoples have suffered disproportionately from COVID, yet the state and Enbridge showed little concern.

Further, Indigenous people have repeatedly raised concern about an increase in sex and drug trafficking due to the influx of out-of-state Line 3 construction workers. Enbridge wrote a weak Human Trafficking Prevention Plan and the state rubber-stamped it. The state-imposed no reporting requirement on sex trafficking arrests, let alone impose any sanctions on Enbridge for violations. This was callous and irresponsible.

Enbridge’s letter states it has made “multiple overtures” to the trespassers. We are confused by this statement. The June 12 letter was the first communication we received.

Enbridge refers to us as “criminals.” Enbridge is the criminal. It’s been cited multiple times for safety violations. It’s responsible for the 2010 crude oil spill in Michigan’s Kalamazoo River that took several years and $1.2 billion to clean up.

In the most recent outrage, Enbridge is seeking to mess with more of our clean water. It originally asked the state for a permit allowing it to dewater 510 million gallons of water for construction. On Friday, it amended its request to 5 billion gallons of water or ten times the original amount. And this during a state drought.
Enbridge and the state of Minnesota have repeatedly failed to respect our treaty rights, our lands, and our water.

We wait with great anticipation to hear the decision on a major lawsuit before the Minnesota Court of Appeals challenging Line 3 permits. We will have more to say tomorrow.

I am this #BadAssGrandma thank you for your excellent reporting. I have a concussion and now require spine surgery. This is #EcologicalTerrorism and we MUST #StopLine3