North Dakota law enforcement admits that it had little experience, and no policies in place, when it fired rubber bullets, tear gas, and other chemical agents into Standing Rock Water Protectors.

Among 178 agencies named in the militarized buildup for the benefit of Dakota Access Pipeline is the unlikely agency of US Customs and Border Patrol. The report confirms that North Dakota Game and Fish was responsible for aerial spying on Standing Rock camps.

While stating the pros and cons of its SWAT Team, the report states, "There were no formal, pre-planned policies on the use of less-than-lethal munitions and riot control/chemical agents."

The report is the North Dakota Emergency Response After-Action Report, made public today by The Intercept.

The report states, "The historical lack of experience with large-scale violent protests meant that little planning had gone into the use of less-than-lethal munitions and riot control/chemical agents."

The report also makes it clear that law enforcement had a cozy relationship with the media who relied on and published, the public relations spin of law enforcement. A review of the media in 2016 and 2017, reveals that Bismarck and North Dakota media gave priority to law enforcement statements regarding Standing Rock.

In the lengthy daily timeline of events, the report fails to identify and document the peaceful Water Protectors who were critically injured.

The report fails to detail the role of the hired mercenaries TigerSwan, the paid FBI informant Heath Harmon, or the private security hired by Dakota Access Pipeline and the subcontracted dog handlers who brought vicious attack dogs.

In the list of its failures, the report does state that law enforcement was not prepared for the Water Protectors' use of drones.

"There were no formal, pre-planned policies on how to deal with the use of drones."

The report says the historical lack of experience with the use of drones meant that little planning had gone into the use of defensive measures.

The aerial spying over Standing Rock Water Protector camps was carried out by numerous North Dakota agencies, including Game and Fish.

The report says, "Use of the Dept. of Transportation, Highway Patrol, and Game & Fish airplanes provided vital aerial reconnaissance and video footage of the protester camp and activities. Unmanned Aerial Systems provided useful information at times, but were not as consistently valuable as the intelligence received from the airplanes."

"Aerial assets from the ND Highway Patrol and Game & Fish Dept. were an important component of the success of operations."

"The lack of experience and/or training, as well as the frequent turnover of staff also resulted in resources/equipment being lost, damaged, or destroyed. For example, the wrong type of fuel was put into equipment," the report says about the National Guard.

The report points out that law enforcement wasn't trained or prepared.

"Fatigue at the end of such shifts, caused the responders to leave the forward operating areas immediately, and not spend any time passing along what they saw and experienced. The limited experience with previous civil unrest incidents and limited human resources trained to respond to mass protests and disturbances are reflected in these observations."

The report fails to provide the details of the role of the Fusion Center, the secretive inter-agency joint law enforcement operation based at the National Guard headquarters.

Drones were used, but law enforcement lacked the training to decipher data

Although law enforcement used drones, the information could not always be understood, due to the lack of training.

"The use of video obtained from unmanned aerial systems was not well understood until later in the timeline of events," the report states about drones.

"The historic nature of this event cannot be overemphasized. Not only was the size, location, and intensity of the protests unprecedented in North Dakota history, but also the advent of new technologies. While the technology of UAS is well understood in North Dakota, the practices required to turn raw information into actionable intelligence was not. The learning curve for the use of this technology was very steep."

The North Dakota law enforcement report states, "Some of the technologies deployed for intelligence gathering were brought in from the National Guard, and thus, had a 'weaponized' appearance."

"Even the UAS that were utilized have a very functional 'military' look."

"The need for long-range surveillance optics to help enhance responder safety necessitated the use of systems that were attached to National Guard assets. These optics had a general military appearance, and some of the systems deployed were components of Avenger missile batteries."

Law Enforcement relied on spying on social media, and Go Fund Me accounts,  for intelligence gathering

As for intelligence gathering, law enforcement relied on social media and spied on Go Fund Me accounts.

"There was a lack of on the ground, human intelligence gathering inside the protest organizations."

"As the intelligence gathering mechanisms got moving, there was information gathered from a number of sources – geospatial/imagery (aerial photogrammetry), open-source (social media, traditional media), financial (researching of GoFundMe accounts), and visual observation of the camps and the criminal activities of the protesters. However, federal, state, and local information gathering was limited inside the protest camps and factions."

"The use of drones by the protest factions was a new phenomenon for North Dakota. This allowed the protesters to get a new perspective out at incredible speeds," the report says, claiming the Water Protectors lack of compliance with FAR Part 107.

The report reveals that the legal team was left out of planning, which means there was no legal oversight into the actions of law enforcement.

"The legal team was left out of the planning process," the report states.

"Because of security breaches early in the event, the response became very compartmentalized. Personnel were only given access to information and participated in planning for only the specific parts of the response that they were involved with. Therefore, Finance/Admin/Legal staff were not included in the planning process."

"There was little formal coordination between legal counsel and the planning and operations sections, NDHP, law enforcement, and Morton County officials," the report states.

There was also a failure to prepare for the handling of dangerous biohazard waste.

"While biohazard bags, suction containers, and needle disposal supplies were a part of the medical supply cache, no plan or contract had been established for the transport and disposal of biohazard waste from the field operations. In this situation, there was no access to a sewer system, so any liquid waste such as blood-contaminated water caused by cleaning wounds needed to be disposed of in another manner."

"The lack of a definitive plan for the management of biohazard waste from a field operation resulted in some 'improvising' and could have potentially put responders (law enforcement, fire, food service providers, and other non-medical personnel) at risk of accidental exposure to biohazard waste," the report states.

The Open Records requests were also a source of conflict at the command center.

"Since there were coordination issues between the counsel and staff of the numerous state agencies involved, there were also many different interpretations of North Dakota Century Code 44-04. These interpretations of the same law made this an effective tactic in the protesters' arsenal. It also tied up members of the state workforce who could have been more productive elsewhere."

Crowdsource funding sources, including Go Fund Me accounts, were recognized by law enforcement as a way to gain international support. Social media and celebrities were viewed as assets of Water Protectors.

The report says, "Crowdsourced Funding: This was the first protest in North Dakota history that was fueled by crowdsourcing funding. The extensive use of social media and celebrities by the protest factions meant that their message got out to those who supported them at phenomenal speeds."

"Since the audience for these forms of media is digitally savvy, crowdsource funding was a logical next step for protest organizers to take. This gives protest organizers an international monetary base and provides virtually unlimited resources. These vast, ongoing funding streams mean that protests can last almost indefinitely, unless other factors intervene, in this case, the harsh North Dakota winter and potential for spring flooding."

As reported earlier by investigative news media, the National Sheriffs' Association was responsible for bringing in law enforcement from around the country and lobbying Congress for excess militarized vehicles and equipment.

The head of the National Sheriffs'  Association was from southern Louisiana and his community stood to benefit from the tail end of the Dakota Access Pipeline, which is the Bayou Bridge Pipeline.

Desmog reported how the National Sheriffs' Association lobbied Congress for surplus military gear and was funded in part by TigerSwan mercenaries.

Separate internal documents by Morton County revealed that TigerSwan served as an advisor, and spear-headed, the militarized assault on Standing Rock Water Protectors. As a result, TigerSwan's work without a North Dakota license resulted in a separate action penalizing Tiger Swan.

Desmog reported, "At the end of 2016, as a mix of sheriffs, police, and private security forces were clashing with those protesting the Dakota Access pipeline at the Standing Rock Sioux Reservation, the National Sheriffs’ Association was lobbying Congress for surplus military gear and on undisclosed issues related to the now-operating oil pipeline," reported Steve Horn and Curtis Waltman.

The law enforcement agencies who participated in the militarized attacks are listed below in the report: Minnesota, Wisconsin, South Dakota, Montana, Nebraska, Indiana, Alabama, Ohio, Louisiana, and Kentucky.

The report fails to describe the violations of human rights violations, critical injuries, and violations of rights in jails and during years of imprisonment for Water Protectors. 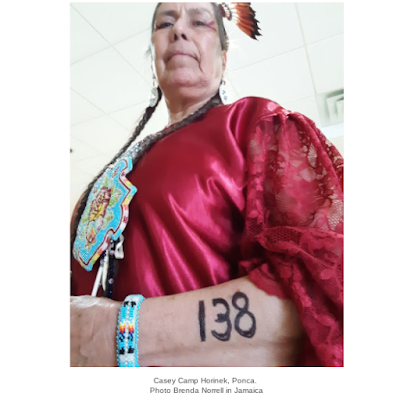 Native women testified before the Inter-American Commission on Human Rights in Jamaica describing the horrific abuse.

Water Protectors were strip-searched, and numbers were placed on their arms as was done by the Nazis. They were imprisoned in dog kennels in jail basements and denied their medications. Read the article: https://bsnorrell.blogspot.com/2019/05/live-from-jamaica-inter-american.html

Currently, the lawsuits filed by Water Protectors who were critically injured by violent, militarized, unprepared, and untrained law enforcement are ongoing.

Read the article at The Intercept:

Who was responsible for the militarized attack on Standing Rock Water Protectors? 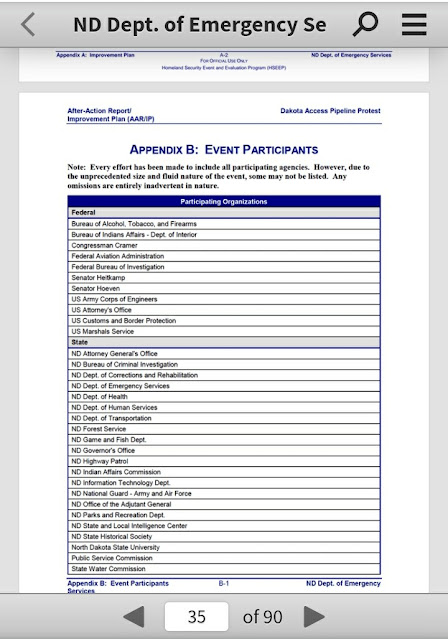 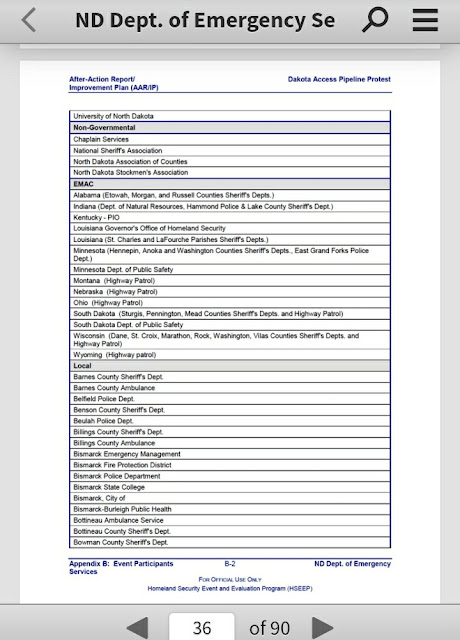 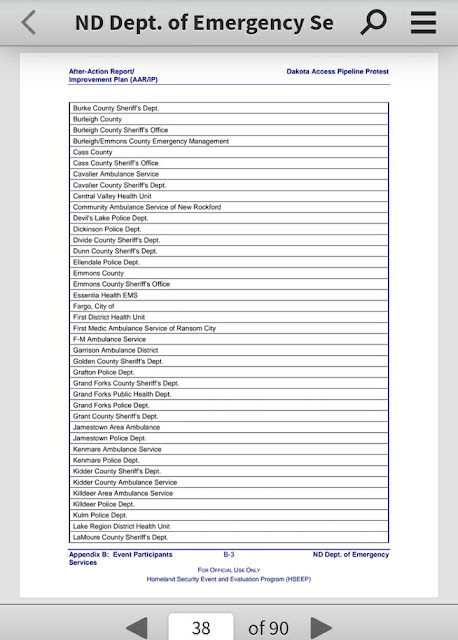 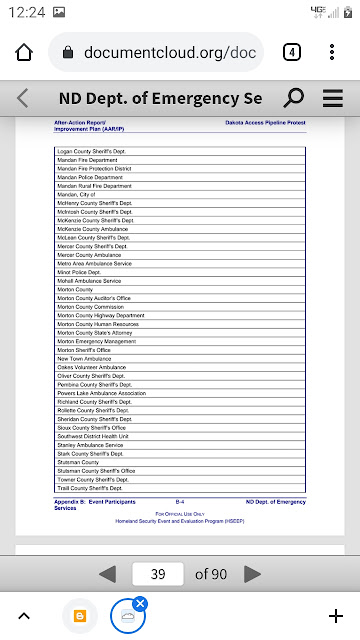 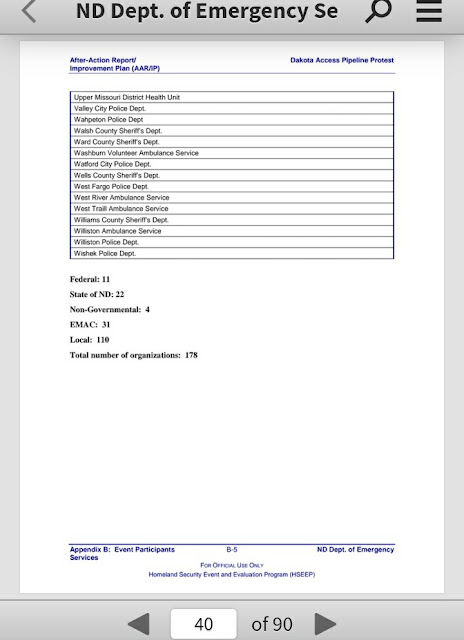