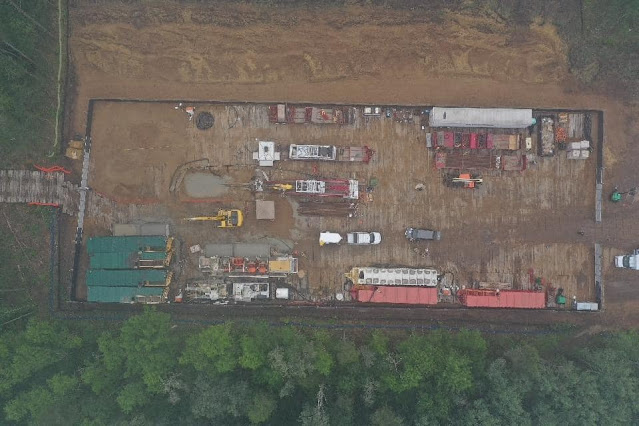 Water Protectors Lock Down to Line 3 Horizontal Direction Drill, Stop Drilling of Shell River
By Giniw Collective
Contact: giniw@protonmail.com
July 20, 2021
SHELL CITY TOWNSHIP, Minnesota -- This morning, 3 water protectors locked down to one of Enbridge's Horizontal Directional Drills, halting drilling under the Shell River.
Enbridge is drilling under riverbeds across Anishinaabe treaty territory, including the Willow River, where it appears construction hit an aquifer while drilling. The Minnesota Pollution Control Agency is “investigating” the frac-out with seemingly little urgency.
While northern Minnesota is in a record-setting drought with many water bodies going completely dry, Minnesota’s DNR granted Enbridge a variance to their "dewatering" permits, allowing Enbridge an increase from pumping 540 million gallons from local lakes and rivers to 5 billion gallons of water. MNDNR then suspended dewatering permits in limited locations due to extreme drought conditions — Enbridge continues to truck water from other nearby locations, including the Mississippi headwaters.
Water Protector Hannah Joseph said, “I’m taking action to stop the construction of Enbridge’s Line 3 pipeline, and particularly to stop the drilling under the Shell River and all of the waterways this toxic pipeline would cross. I am called to support my Anishinaabe and Dakota friends in their fight for self-determination. This place is sacred, and defending it is an honor and a privilege. I feel the spirits of my queer, trans, and Jewish ancestors supporting me as I put prayers out, strengthening me with the same resolve that has guaranteed the survival of all who struggle against colonialism. I know that prayer alone is not enough, and I am committed to seeing my actions through...we will stop this pipeline. Join us in ceremony and in action.”
Nearly 600 people have been arrested to date fighting Line 3's destruction of Anishinaabe treaty territory and expansion of the fossil fuel industry as climate crisis rages across Mother Earth.
Giniw Collective is an Indigenous-women, 2-Spirit led frontline resistance to protect our Mother, defend the sacred and live in balance. We stand unafraid. Prayers into action. Follow us on Facebook, Twitter, or Instagram @GiniwCollective
at July 20, 2021