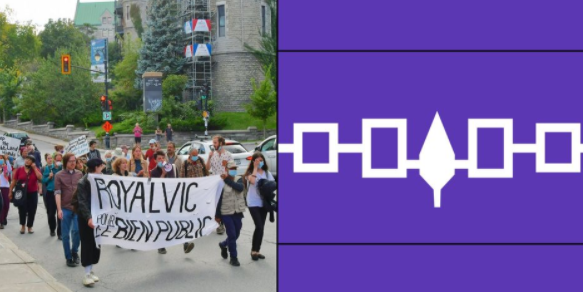 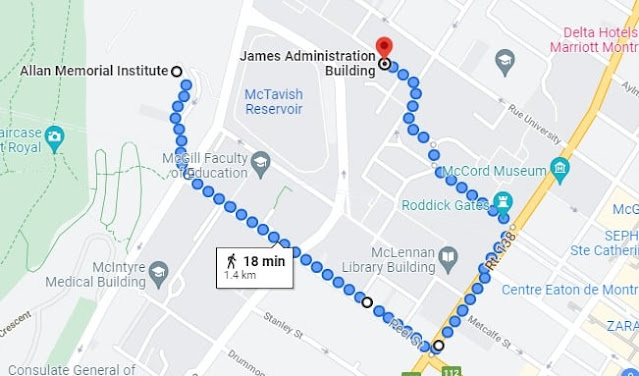 "You never know what happiness a simple act of kindness will bring about." Bree Abel
NOV. 9, MOHAWK MOTHERS FILED A MOTION IN THE FEDERAL COURT OF CANADA TO INVESTIGATE FOR UNMARKED GRAVES OF CHILDREN ON THE GROUNDS OF THE MCGILL ROYAL VIC PROJECT AND TO STOP THE ENTIRE PROJECT. IT IS ON MOHAWK LAND AND IROQUOIS AND GENERAL  INDIAN TRUST FUNDS WERE BORROWED TO BUILD THE SCHOOL, WHICH WERE NEVER REPAID. ONLY MOHAWKS CAN PERMIT ANYTHING TO BE DONE TO THEIR LAND. SEE FCC T-1696-21. KANISTENSERA V. Societe quebecoise des infrastructures; mcgill university office of the principal & vice chancellor; mairie d'arrondissement de ville-marie; stantec i nc.
Address options
okwaraken@riseup.net
at November 09, 2021 No comments:

GLASGOW, Scotland -- It is the gold mines, diamond mines and extractive industries that are responsible for disappearing Indigenous women. They are being stolen as a result of capitalism, colonialism and earth extraction, Siiam Hamilton said at an action of Missing and Murdered Indigenous Women at COP26 today.

"That violence is inseparable from capitalism and colonialism, and what the British empire has done to our community."

"Look at my face and remember it, it is a responsibility now that they have seen me. If I go missing -- its not if, its when -- in our communities. When I go missing, come look for me. Our lives matter." 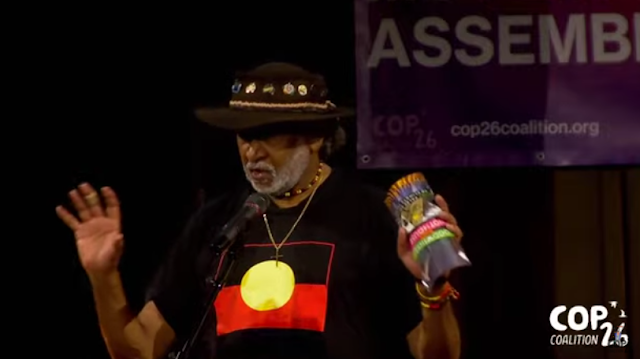 Indigenous from Australia speaking on ancestry and the betrayals of humanity at COP26.
"If you want to know how to fix this climate crisis -- listen to Indigenous Peoples."
Article by Brenda Norrell
Censored News
GLASGOW, Scotland -- Indigenous at the Indigenous Movement Assembly from around the world are speaking today on real solutions to the climate crisis created by invaders and the fossil fuel industry.
Speaking now, Indigenous elder Ray Minniecon from Australia describes the betrayals of humanity at the UN Climate Summit COP 26.
"Our Australian Pavilion has no Indigenous in it."
Speaking on the history of genocide, Minniecon said the Pope gave the invaders the right to genocide and to take the lands.
"This is hypocrisy, pure deceitfulness. The governments that have destroyed the climate are now at COP26 claiming they will remedy the climate crisis.
For 60,000 years his people have looked after the land."
"If you want to know how to fix this climate crisis, listen to the Indigenous Peoples," he said.
The invaders do not have the solutions.
The governments have come to COP26 supported by the fossil fuel corporations.
Indigenous Peoples did not create this crisis.
"We are the victims of this crisis."
Speaking of the future children, who should not have to clean up today's mess, he said, "We have got a huge responsibility."
"I don't see any hope in here," he said, pointing out that the governments who are the cause of climate crisis and are supported by the fossil fuel industries, are the ones claiming to have the solutions.
"We are demanding a seat at the table."
"The United Nations is made up of the countries who have invaded us -- so why should I listen to them." 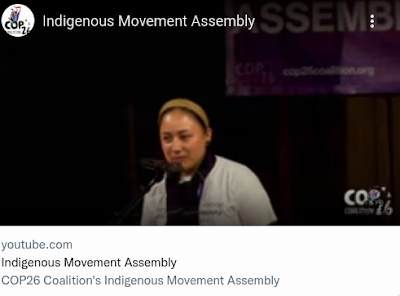 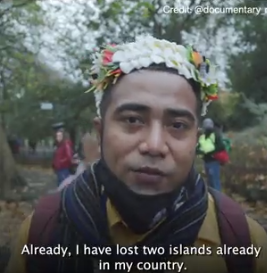 "I want to tell the world that my beloved country is facing a climate crises - already I have lost two Islands from my country - it's a very sad thing." Bernard Ewekia from Tuvalu speaks about living on the frontline of the climate crises, & asks for justice for his country.
.Indigenous Peoples impacted by corporate development programs have their own solutions outside of carbon markets. Indigenous Traditional Knowledge holders came together to share their stories, knowledge and work towards a Just Transition.
Watch live Nov. 9, 2021
at November 09, 2021 No comments:

Indigenous at COP26: 'We're not just somebody to look at' 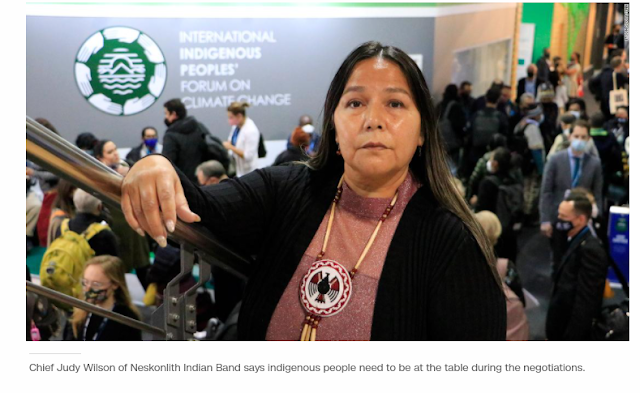 CNN: Chief Judy Wilson of Neskonlith Indian Band said at COP26: said at COP26: "We're not just somebody to look at and say, 'Oh, you know, there's a presence of Indigenous people.' If you're not hearing our voices, and we're not at the table -- and we're not -- if you're not listening to us, then that's just for show," she said. "ou're talking about our land, you're talking about our water, you're talking about our trees for carbon offsetting ... you should be talking to the indigenous people, because that's whose land it is."
Wilson said she found the way the world leaders' summit was conducted particularly upsetting -- and a good reflection of how climate decisions are made.
"You walk in the room, that's no place for you. When the G20 speeches were going on ... all the wealthier countries, they did their speeches, they said what they're going to do, and then oh, what they might do to help the underdeveloped countries, then they left," she said.
"They didn't stay to hear the whole discussion with Barbados, with Bolivia, all the other countries that [have] solid climate action plans, what they're going to do for their country and what they needed help with," she said. "They weren't in the room to hear it. So to me, that's disrespectful because, you know, if you're going to give your presentation, and you're there to hear others, you should be sitting there listening yourself."
Read article at CNN:
https://www.cnn.com/2021/11/09/world/cop26-climate-talks-race-intl/index.html 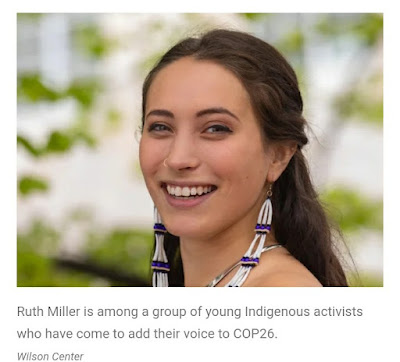 Indigenous activists say the legacy of colonialism has limited their access to COP-26
NPR
Ruth Miller, Alaska: "But, of course, you can't relocate your grandparents' graves. You can't relocate your ancient sacred sites. You can't adapt to the places that are lost due to climate change. This past year, when I was forced to watch our sitka, our salmon dying in our streams of heatstroke, it was heartbreaking."
https://www.npr.org/2021/11/08/1053647220/indigenous-activists-say-the-legacy-of-colonialism-has-limited-their-access-to-c
at November 09, 2021 No comments: