Local Lithium Mining Deal was being kept secret when Paiute Shoshone Myron Dewey made final warning
Article by Brenda Norrell
Censored News
French translation by Christine Prat
TONOPAH, Nevada -- A massive lithium mining deal was being kept secret when Paiute Shoshone Journalist Myron Dewey made his final warning about lithium mining in Nevada. Dewey was killed in a head-on collision the day after he live-streamed and warned of the dangers of both the Navy's bombing range here, and lithium mining.
The company now admits that the lithium deal near Tonopah in Nye County was being kept secret and that lithium mining is considered gold, as the demand for lithium for batteries increases for electric cars, cellphones and laptops.
The silence about lithium mining in Dewey's homelands, was mirrored at the UN Climate Summit, COP26 in Scotland, where there was little mention of the Indigenous People risking their lives to protect the land and water from lithium mining. Lawsuits have resulted globally from the deaths of children working in cobalt mines for the lithium batteries.
Electric cars are part of the corporate and political "greenwashing" underway, offering false solutions to the climate crisis.

“We purposely kept it quiet until we were well-developed along the permitting lines and along our engineering and our geological sciences,” Kobler explained for commissioners on Nov. 2. Kobler said that this may be the first time many were hearing about the Tonopah Lithium Corp.’s plans for the area.
Paiute and Shoshone ancestral lands have long been targeted for atomic bomb testing, dangerous military training and overflights, and gold mining.
Tonopah Lithium Corp. is also targeting lithium mining in Peru.
“The company has two quality lithium projects in TLC (Tonopah lithium claims) and a project in Peru… Nevada and Peru are the top mining jurisdictions in the world,” Kobler stated.
“We are well funded, we have $16 million in cash and we just raised $35 million so we will have $50 million in cash in the bank and that funds our  operations for the next two years, so we are on very good financial footing," Kobler said in the article by Pahrump Valley Times.
At the same time, the U.S. federal court continues to deny recognition of the Paiute Massacre Site at Thacker Pass, where destructive lithium mining is targeting the massacre site and pristine land in northern Nevada.
Dewey was killed in a car crash the day after he live-streamed near his childhood home, on a remote dirt road near his family's home near Yomba in Nye County, Nevada. On the day before, Dewey warned of the dangers of both the Navy bombing range here and its planned expansion, and lithium mining.
Earlier, Dewey's drone aerial footage exposed the militarized police and private security that were protecting Dakota Access Pipeline at Standing Rock in 2016 and 2017. The video footage also exposed the widespread excessive force of police resulting in critical injuries to Water Protectors.
Below: Hawkstone Mining in Australia, now targeting Hualapai ancestral lands, posted this map of areas targeted for new lithium mining: 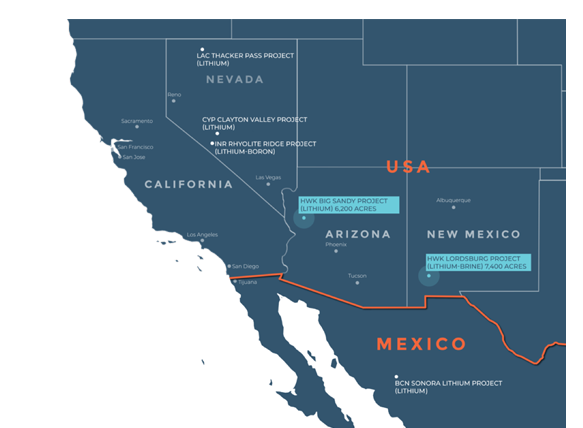