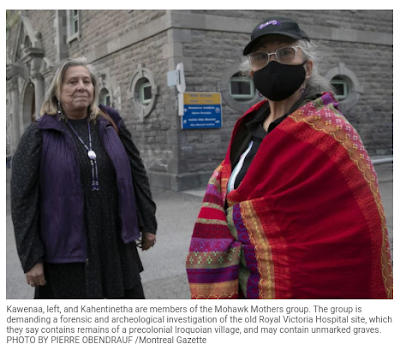 McGill University said Monday it is ready to cooperate with governments and Indigenous leaders to explore whether there are any unmarked graves of Indigenous children on the property of the former Royal Victoria Hospital.

Kahentinetha, 81, one of the group’s organizers, said she was pleased that McGill is ready to co-operate in the search. But she said her group must oversee the investigation.

“If we find anything, then all of McGill has to be declared a crime scene,” she said.

Kahentinetha said that McGill was built with money stolen from a trust fund for First Nations people, was “run by the military” and produced weapons used against the Palestinians.

She claimed that healthy children were taken from Kahnawake and given lobotomies at the Allan Memorial Hospital but said their identities must remain a secret.

Read the article at Montreal Gazette: