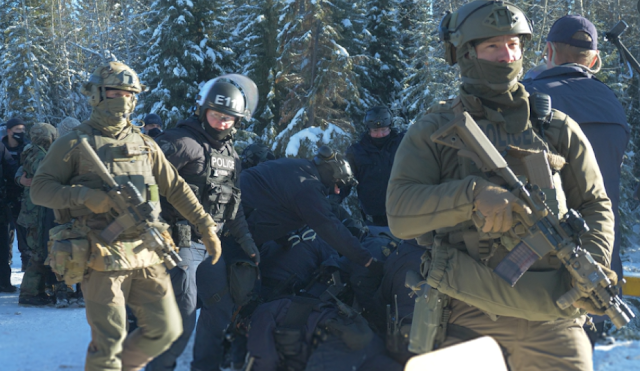 Nov. 20, 2021 -- The Committee to Protect Journalists today expressed grave concern about the Royal Canadian Mounted Police’s arrest and detention yesterday of two journalists covering land rights protests in northern British Columbia.
Photojournalist Amber Bracken, who was on assignment for the environmental news outlet the Narwhal, and independent documentary filmmaker Michael Toledano were covering ongoing demonstrations against the construction of the Coastal GasLink pipeline through Indigenous Wet’suwet’en territory at the time of their arrests, according to the Canadian Association of Journalists. The CAJ says both journalists are still in custody.

By Gidimt'en Checkpoint
NOVEMBER 18, 2021
WET’SUWET’EN TERRITORY, SMITHERS, BC: Dozens of heavily armed RCMP breached the Gidimt'en Checkpoint this morning. There are 15 confirmed arrests, including two Wet'suwet'en elders, 3 Haudenosaunee members, 3 Legal Observers, and one journalist. Police were deployed in military garb, armed with assault weapons and dog teams.
Read more »
at November 20, 2021 No comments: