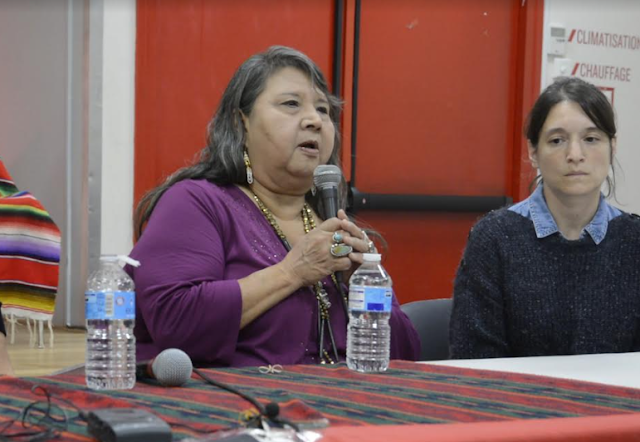 JEAN ROACH TELLS ABOUT THE EVENTS SHE WITNESSED WHEN SHE WAS 14, EVENTS THAT LED TO LEONARD PELTIER'S LIFELONG SENTENCE

Transcribed and written by Christine Prat

The evening before CSIA-Nitassinan 42nd Day  of Solidarity, Mitch Walking Elk sang at the CICP (International Center for Popular Cultures) and other guests addressed the audience before the show. Jean Roach told the story of that terrible day, in June 1975, when two undercover FBI agents were killed during a shootout, which led to Leonard Peltier being sentenced for the murders, although he has long been proven innocent.

"Right now, Leonard has been in prison for 47 years. And we are trying all avenues to have President Biden grant him his clemency. Everybody asks us what we would like people to do. What we're asking is everybody, if you are a person, an organization or a government official, to write letters of support urging President Biden to grant executive clemency.

"The grandma and grandpa Jumping Bull asked Leonard Peltier and other AIM members to help protect them, as they made a move to pull away from the tribal government and the Oglala community.

"What we were doing there was basically helping a community. We were building gardens, helping the grandpa and grandma. They were just celebrating their 50th anniversary. And whatever they needed done, we were there. And Leonard and the other guys were there for protection. Because we were always a target.

"On the day when the FBI came to our camp, we didn't know who they were. They came in unmarked cars and they weren't wearing uniforms, so we couldn't tell who they were. If they were the GOON squads or who they were. So, Leonard Peltier, Dino Butler, Bob Robideau and the others protected us. They saved our lives. There we lost our brother Joe Stuntz, the moment they killed the FBI agents. And Leonard Peltier, Dino Butler and Bob Robideau and another man were charged for the murders of the FBI. They did illegal searches and they broke into the peoples' homes  looking for the people that escaped, who were mostly us and we were all under the age of 18, the majority there.

"So, Dino Butler and Bob Robideau went to court where they were acquitted on the basis of self-defense, for the FBI attacked our camp. No one was charged except for Leonard Peltier, who was in Canada and by then was facing extradition.

"Again, the United States government broke the law. The Canadian government wanted an eyewitness before they would extradite. They threatened a Lakota woman by the name of Myrtle Poor Bear. They threatened her with death and taking her kids away if she didn't sign 3 affidavits that they used in Canada. When we heard about Myrtle Poor Bear, it was really sad because she was threatened like that. The saddest part is that nobody knew who she was. She had no connection to Leonard and she claimed to be his girlfriend, but she was used and abused in Canada.

"So, when it came time for his court trial, he didn't go to the same court as Dino and Bob, where they were acquitted. They made sure that they sent him to North Dakota to a known racist judge.

"My point is that immediately they lied and they have been doing so for 47 years, the United States government. They've been breaking human rights, constitutional rights and treaty rights. All because they want one person to pay for it and they want revenge.

"Four weeks ago, we got the whole Democratic Party of the United States to unanimously pass a resolution in support of Leonard Peltier's release. We had several support letters over time, and it doesn't seem to please the United States government. We're hoping that the European countries will be able to put pressure on Biden because he represents himself, or the United States represents themselves, as human rights leaders.

"When COVID came, the United States government treated the tribes, Indigenous people differently. When Leonard caught COVID inside the prison, we were scared because he had so many health problems. He is 78-years-old. Again, when he was quarantined, he didn't go to a medical unit, despite all his health issues, they just put him in a solitary cell and they didn't even give him water, his medical update or at least a medical appointment to see in what shape his body is in it seems.

"But one of the things that we always say, we have been to the United Nations in Geneva and all we ask is for the United States government to tell the truth, that's all. We don't want special treatment, we just want them to tell the truth. It's really simple. There is a lot more, you know, I can talk forever."

I support you and your peoples desire for truth. I have been in support of freeing Leonard Peltier since I was a young woman. I am now 65 yrs old and so sorry your voices and all our voices go unheard. The story you told brought me to tears. Again, it is the truth being denied. Over and over again That is why it is so painful. I pray for the right way. I pray for Leonard to feel the earth under his feet again.