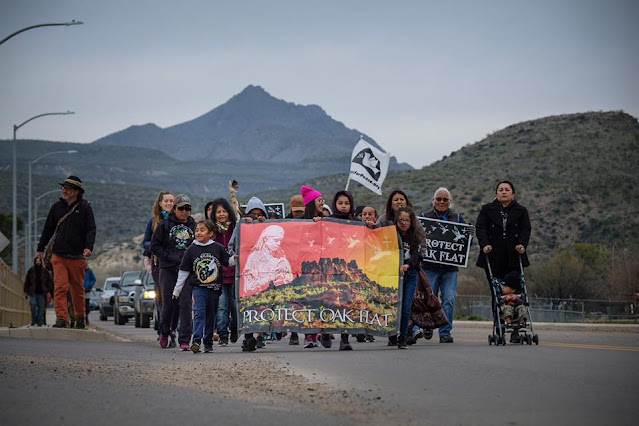 
WASHINGTON – A federal appeals court will take a second look at Apache Stronghold’s appeal to save their sacred site at Oak Flat. In Apache Stronghold v. United States, the Ninth Circuit previously ruled that the federal government could give Oak Flat to a foreign-owned mining company that will swallow the site in a massive crater, ending Apache religious practices forever (Watch this short video to learn more). Today, the court announced that it will rehear the case “en banc”—meaning in front of a full panel of eleven judges—giving Apache Stronghold a second chance to win protection for Oak Flat.

“Apache have gathered at Oak Flat to connect with our Creator for millennia, and we want to continue this sacred tradition,” said Dr. Wendsler Nosie, Sr. of Apache Stronghold. “The government protects historical churches and other important religious landmarks, and our site deserves no less protection. We are glad the Ninth Circuit is going to take a closer look at this decision, and we hope it will do the right thing and protect Oak Flat.”

Since time immemorial, Western Apache and other native peoples have come to Oak Flat for essential religious ceremonies that cannot take place anywhere else. For decades, Oak Flat has been protected by the federal government from mining and other practices that would render the hallowed land unusable for the Apache’s religious practices. The longstanding protections for Oak Flat were eliminated in 2014, when a midnight rider was inserted into a must-pass bill ordering the transfer of Oak Flat to Resolution Copper, a foreign-owned mining company that plans to turn the sacred site into a two-mile-wide and 1,100-foot-deep crater.

This past June, a panel of three Ninth Circuit judges ruled 2-1 against Apache Stronghold, with Judge Berzon dissenting and calling the ruling “illogical,” “incoherent,” “flawed,” and “absurd.” Now, a majority of the Ninth Circuit’s 29 active judges has voted to rehear the case and will convene a special panel of eleven judges to decide whether the law allows the government to destroy sacred sites.


“The court now has an opportunity to correct its earlier mistake and protect Apache religious exercise at Oak Flat,” said Luke Goodrich, vice president and senior counsel at Becket. “A win for Apache Stronghold will be a win for people of all faiths.”

In addition to Becket, Apache Stronghold is represented by attorneys Michael V. Nixon and Clifford Levenson.