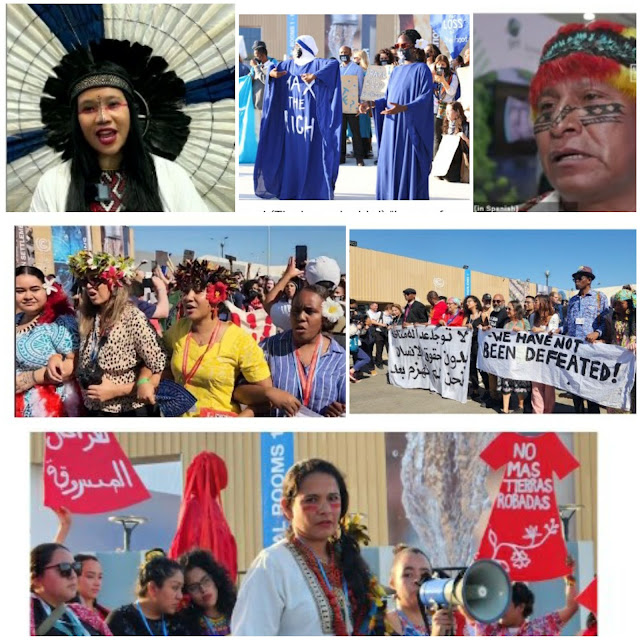 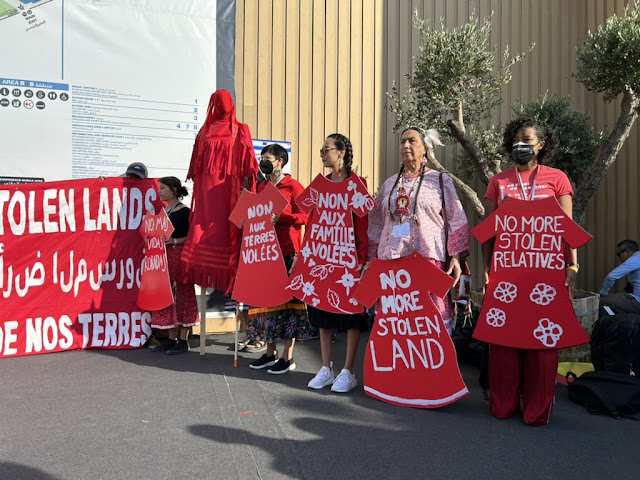 "I come from a beautiful place where nature shows its wise harmony," said this Indigenous activist from the Amazon in Brazil. "Sometimes the wind comes and whispers in my ear, Do not be afraid you are not inferior to anyone. You are not superior to anyone."
https://twitter.com/i/status/1593519021038526466
Jacob Johns, Akimel O'otham and Hopi, and Big Wind Carpenter, Northern Arapaho,  were among four climate activists whose credentials were removed after their war cry and banner drop during President Biden's address.
Johns told the Guardian, “We’ve been locked out, our voices silenced,” said Johns, 39, a Washington state-based community organizer. “The climate collapse is coming, we are literally fighting for our lives. If we’re not allowed to advocate for our future, who will? It’s shameful."
”The world is falling apart but inside the destruction, there is creation and a healthy liveable future, and we try to bring this energy to the chaotic negotiations. International spaces have been historically off-limits to indigenous peoples, but different perspectives can hold a lot of power. I’ve been denied that basic right.”
Johns raised his own funds to attend COP27 and was then locked out
Big Wind, Northern Arapaho, told the Guardian, “This is a clear example of radical Indigenous people and youth being silenced, we’re muted when we try to express our frustration in these spaces. It shows the UN’s true colors.”
“We need to accelerate the transition but that’s not going to happen by partnering with big polluters like Amazon and PepsiCo, and so we needed to call that out,” he said, in reference to an announcement earlier this week by US climate envoy John Kerry, the Bezos Earth Fund, PepsiCo and others about plans to design an energy transition accelerator.
https://www.theguardian.com/environment/2022/nov/18/shameful-un-silencing-indigenous-voices-say-banned-cop27-activists

The Terena People of Brazil bring real solutions to COP27 in Egypt, but their voices on the spiritual foundation of climate solutions, based on ancestral knowledge, are not heard. Instead, there are 'climate solutions' like making rain with a drone.

"Since the Paris agreement of 2015, we have not seen any concrete results from any of the negotiations. We are not on the same page."

What is missing is spirituality and the connection with the earth.

"There is traditional knowledge, there is indigenous science, both have already shown us other ways to save the planet." 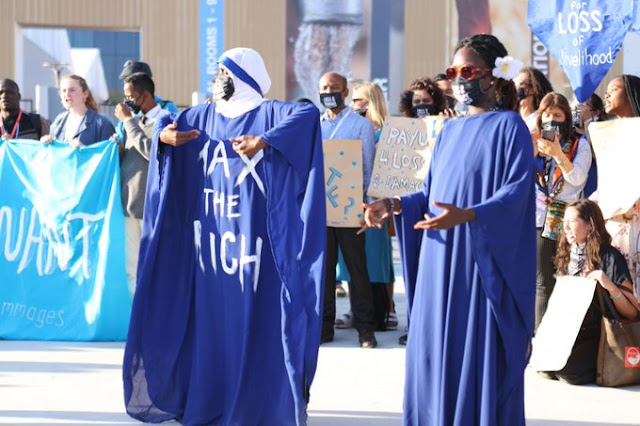 Rukia Ahmed (The hummingbird) "I come from a pastoralist community who are the most affected by climate change in northeastern Kenya! My people are starving due to extreme droughts! Their livestock are dying and they are at risk of dying too! I am here COP27 to demand climate justice." 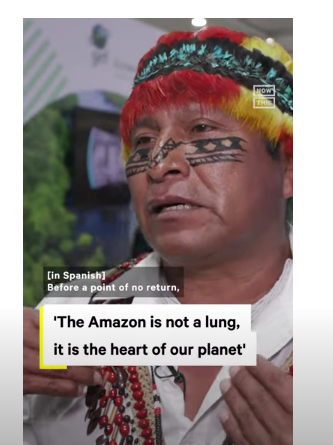 The Amazon is the heart of the planet. Delegations from the Amazon brought their struggle to stop the destruction from oil and gas drilling, and mining, to the UN Climate Summit COP27 in Egypt. In the Amazon, industries are poisoning the rivers and the people don't have clean water to drink. The forests are being cleared and destroyed.
"The Amazon is not a lung, it is the heart of our planet."
Listen on youtube. https://www.youtube.com/watch?v=1XcD11lJE2k

Mexico and Guatemala: "We are here because we are also wanting to talk about what means the energy transition to our territories. In the name of a green transition and the creation of renewable energies, Guatemala and the territories of Central America are suffering a lot of exploitation of our lands and our territories. A lot of this green capitalism, it’s affecting our communities, is displacing people, is creating violence, corruption, and also is perpetuating the genocide and the ecocide in Guatemala and in our territories." Democracy Now
https://www.democracynow.org/2022/11/17/cop27_land_defenders_mexico_guatemala_green 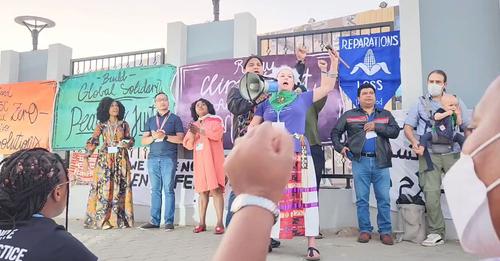 Warrior song honoring Standing Rock, as COP27 comes to a close in Egypt. Listen on Twitter. "Beautiful closing action from Climate Justice movements inside COP 27, with stories of resistance, sharing struggle, and solidarity. While corporate profiteers & states continue to negotiate our lives, we fight on." -- Adrien Salazar
Listen https://twitter.com/adrien4ej/status/1593659843281297408
https://www.telesurenglish.net/news/COP27-Launches-Agenda-to-Help-Climate-Vulnerable-Communities-20221110-0003.html

Hoopa tribal member Danielle Frank, center, speaking on a climate panel about protecting rivers and Indigenous rights at the 27th annual United Nations climate summit in Sharm El-Sheikh, Egypt on Nov. 15, 2022. Frank’s community has been impacted by a series of hydroelectric dams built on the Klamath River in Northern California. Photo by Weston Boyles, Rios to Rivers. The final federal ruling came during the summit to remove the Klamath dams, which means the salmon are coming home.

Thanks for the extended coverage of peoples - indigenous communities, in particular - who have been locked out or had their voices suppressed at COP27.

I humbly commend their efforts and persistence, but sadly, without becoming cynical, have long questioned whether the "minds" that gather inside this conference and other citadels of global power can ever honestly, earnestly, address the challenges that all our relations face in countless homelands around the biosphere. To be sure, from what I see, the voices of many local young activists also fall on deaf ears. How to design a new strategy that mobilizes more outrage and effort on the part of a general public that seems resigned to extinction or to simply "believing" in the all-powerful ability of "modern man" to pull a rabbit out of the hat, to send in the calvary and rescue civilization from - what, itself?

Speaking of "calvary", kudos to the way activists have critiqued the egregious impact of military spending and war industries on environmental degradation and desecration! You know, recently I heard a wildlife "lover and advocate" praise the U.S. military for environmental sensitivity when it shuts down ordinance range activity while migrating birds are sojourning in the area! This is the sort of myopic stupidity and self-redeeming pandering that we often find ourselves up against.

Enough said. Peace and good power to the warriors.