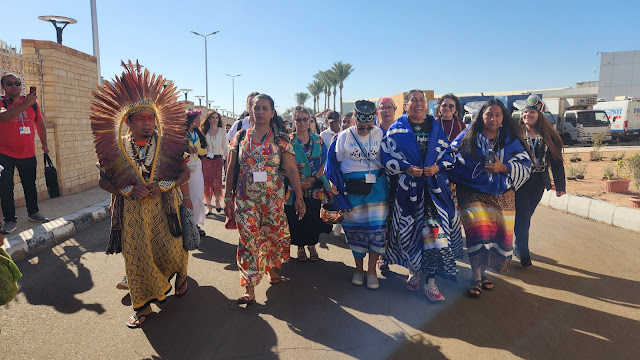 The actions of powerful Indigenous women at COP27, led by Ponca and Anishinaabe, under the heavy oppression of Egypt. Indigenous grandmothers and leaders held a water ceremony and marched through COP27 in Egypt calling for respect and protection of water and lands.
Photo and video courtesy Adrien Salazar on Twitter. Listen to the prayer song.
https://twitter.com/i/status/1591346128817004544
Four activists, Natives and youths from the U.S., have credentials removed after a war cry, and holding up a banner, during Biden's talk at COP27 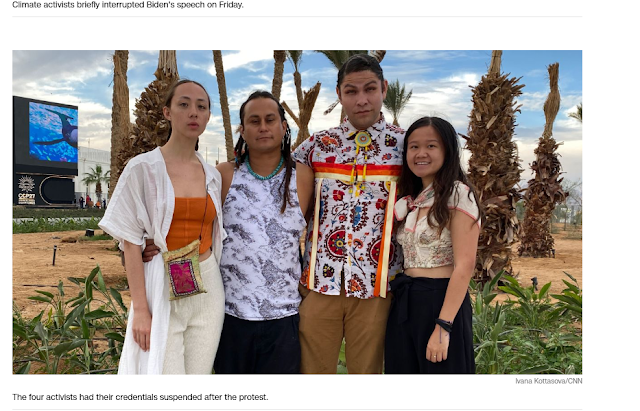 Four American climate activists have been kicked out of the COP27 UN climate talks in Egypt after protesting during US President Joe Biden’s speech on Friday.

The group briefly interrupted Biden’s speech with what they described as an indigenous war cry, then unfurled a banner which read “People vs Fossil Fuels.” While Biden appeared mostly unfazed by the protest – pausing for a short moment before resuming his address – the four activists faced consequences.

“It hurts to say this, but they don’t get attention. There’s so many actions that happen within the COP space that are meaningful – people whose communities, our communities, are affected are speaking about it, and they offer solutions to these problems but there’s no coverage at all,” said Big Wind, climate activist and a member of the Northern Arapaho Tribe.

Akimel O'odham and Hopi Jacob Johns
“All the meetings that we had, I can only speak for myself, but they were really trying to instill fear in us, you know, it’s such a repressive state … but inside the [conference venue], that is supposed to be UN territory,” said Jacob Johns, another of the group of activists who had been suspended from the conference. “And so for the UN to be denying people free speech in that space that is supposed to be theirs is just, you know, a slap in the face. It’s hypocrisy.”
Read full article
https://www.cnn.com/2022/11/14/world/cop27-banned-biden-speech-protesters-climate-intl/index.html
Listen and view the four taking a stand for climate justice during Biden's talk
https://www.youtube.com/watch?v=63AyFjhXXgM 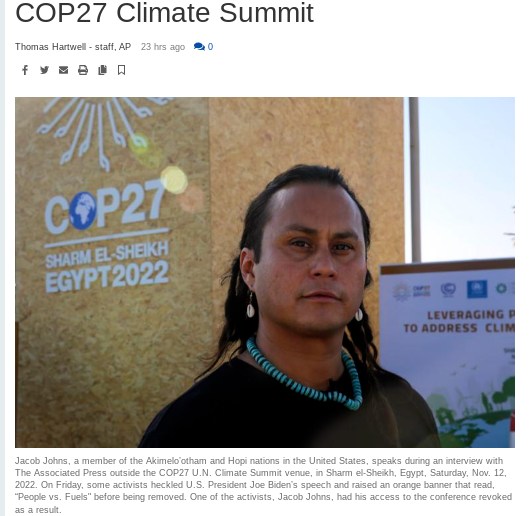 Inequality of Wealth: The Lavish Greenwashing
Saudi Arabia hosts leaders during the UN Climate Summit for their so-called 'green initiative,' while countries are announcing more oil deals. There are more than 600 lobbyists representing the fossil fuel industry at COP27 in Egypt this week.
Oil and gas wells are leading the world in poisoning the air. The most poisonous air in the world is in southwest Texas from oil and gas wells, according to a new Climate Trace map. The U.S. and Russia lead the world in dangerous emissions, primarily from oil and gas wells and power plants. In Indian country, the Bakken oil and gas field of Fort Berthold in North Dakota, the Four Corners oil and gas wells, and Navajo Nation power plants and coal mines, are among the worst poisoning the air.
Read more about the Saudi's lavish meal: https://www.ft.com/.../a29c1204-70cf-46c1-b266-780788bfa048
AP's coverage of COP27 shared by Arkansas Democrat-Gazette:
Activists chanted "keep it in the ground" in reference to their rejection of the continued extraction of fossil fuels.
On Friday, some activists heckled U.S. President Joe Biden's speech and raised an orange banner that read, "People vs. Fuels" before being removed. One of the activists, Jacob Johns, had his access to the conference revoked as a result.
"It's just a great way to silence Indigenous voices nationally and globally," said Johns, a member of the Akimel O'otham and Hopi nations in the United States.
The 39-year-old veteran activist said he went to the speech to protest the U.S.'s new program to encourage more corporate purchases of carbon offsets — a scheme for companies to get credits to pollute by contributing to the removal of carbon dioxide from the atmosphere.
And what really angered the veteran activist was that Biden mentioned Indigenous knowledge and efforts in his speech.
It was "just a really good big slap in the face to climate action," Johns said.
https://www.arkansasonline.com/news/2022/nov/12/hundreds-protest-for-climate-action-at-un-summit/
"No More Stolen Sisters" reads the banner at COP27
Breaking international news
EL-SHEIKH – "Hundreds of environmental activists on Saturday called on industrialized nations at the U.N. climate summit in Egypt to pay for the impact of global warming, the largest demonstration yet that came as German officials raised concerns about possible surveillance and intimidation of delegates and other conference attendees.
"Protests have mostly been muted at the conference, known as COP27, which is taking place in the seaside resort of Sharm el-Sheikh. Activists blamed high cost of travel, accommodation and restrictions in the isolated city for limiting numbers of demonstrators.
"The protesters marched through the conference's ‘Blue Zone,’ which is considered United Nations territory and governed by the global body's rules. That has given the activists a bit more space to voice their opinions than in the rest of the country, where Egypt's authoritarian government essentially bars protests.
Still, there were signs that Egypt was attempting to exert pressure inside the conference venue. Attendees of events at the German pavilion have complained about being photographed and filmed by people unknown to them in the days after Germany hosted an event there with the sister of a jailed Egyptian pro-democracy activist."
Read full article:
https://www.wsls.com/news/world/2022/11/12/hundreds-protest-for-climate-action-at-un-summit/
. 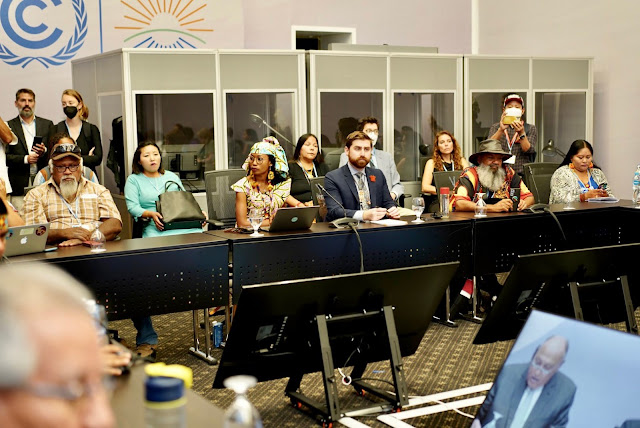 President Sameh Shoukry in the annual open dialogue with the #Indigenous peoples constituency underlines the importance of Indigenous participation, knowledge and solutions across all aspects of clime action and preservation of biodiversity. Photos by  COP27. 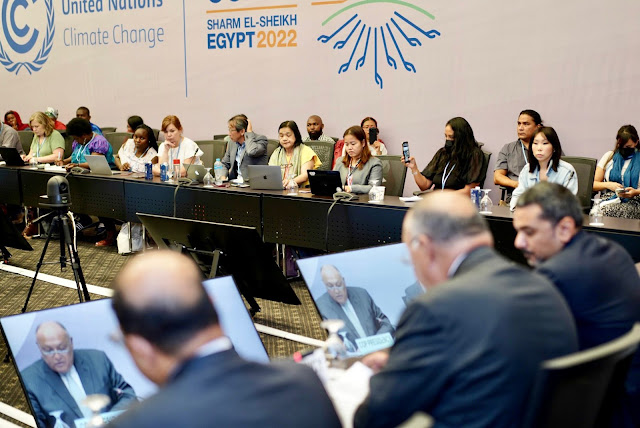