Native Women Speak out at COP27 in Egypt: No More Stolen Sisters, No Fossil Fuel Greenwashing

Native Women Speak out at COP27 in Egypt: No More Stolen Sisters, No Fossil Fuel Greenwashing
Article by Brenda Norrell
Censored News
Native women from North America joined Indigenous women from around the world speaking out against the greenwashing at the UN Climate Summit in Egypt. Pointing out that fossil fuel man camps have become clusters of abusers in Indian country,  they sent their voices out to the world: "No More Stolen Sisters," and "No More Stolen Relatives."

"Our Pueblo people have fought against colonialism," said Julia Fay Bernal, Sandia Pueblo, at COP27 in Egypt.
Julia said New Mexico has been used as a sacrifice zone for energy production -- oil and gas, uranium, hard rock mining, logging -- and now the fossil fuel industries are pushing fossil fuels as false green solutions.
Fossil fuels are being disguised as green solutions in a just transition.
Julia is speaking out for solutions that come from the grassroots up. Most energy initiatives come from the top down, she said, and don't take into account natural and cultural landscapes and the values of Indigenous People.
"Our people have lived in the landscape since time immemorial."

“We have had enough violence on our bodies, our lands, and our water. We are saying no to false solutions. We are saying no to fossil fuels. My struggle must be your struggle and your struggle must be mine," Julia said in Egypt on Fight Fossils Energy Day.
"Land Back isn’t about building a pan-Indigenous empire. It isn’t about owning or reclaiming property. Don’t misinterpret the Indigenous perspective with capitalist values; our worldview surpasses the concept of capitalism and colonialism."
Julia said the United States is the occupying settler regime in the Southwest United States, following the regimes of the Spanish Inquisition and Mexican government on Native lands.
Climate Justice Alliance said, "We gathered to honor the lives of lost and murdered indigenous women. We know that what happens to the land happens to us, indigenous wisdom has taught us such. We must show up and demand an end to the violence of indigenous women and the land."
"Stand against the extractive industry that causes violence against Mother Earth & Indigenous peoples."
Julia Bernal of Pueblo Action Alliance is an enrolled tribal member at Sandia Pueblo and is also from Taos Pueblo and the Yuchi-Creek Nations of Oklahoma.
Twitter video at https://twitter.com/i/status/1592157627240390659 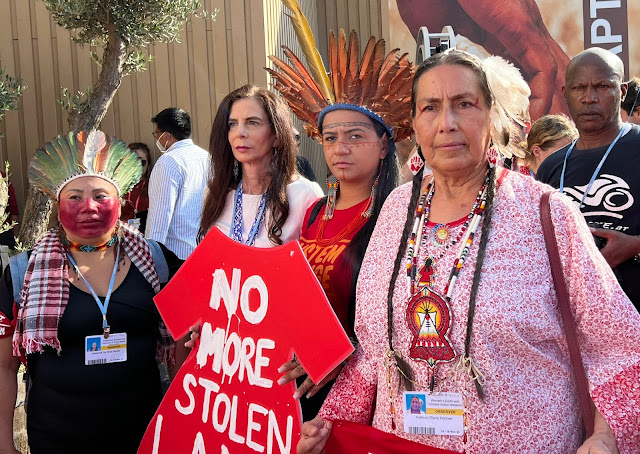 Today at the UN Climate Summit in Egypt, COP 27. "Missing and Murdered Indigenous Women and Girls #MMIWG is an epidemic of violence against Indigenous women. Violence emanates from man camps at locations of extractive projects that are on or near Native communities. Today we spoke out at #COP27" said Climate Justice Alliance. 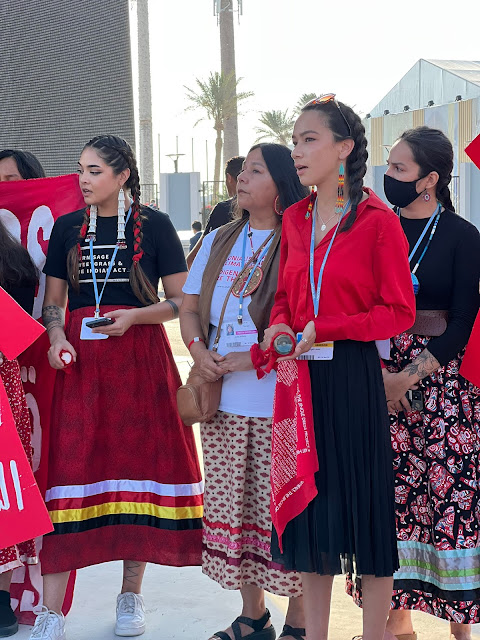 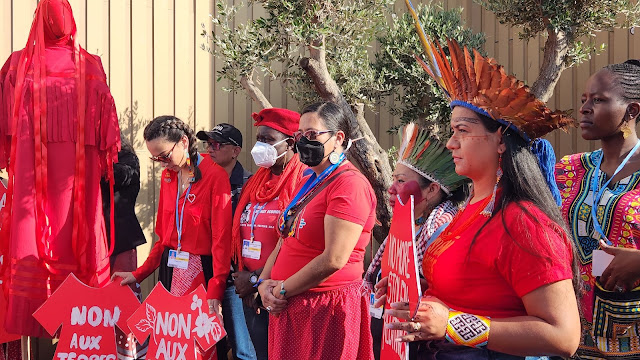 Photo Adrien Salazar/Twitter
"Today on Indigenous Women's Day at COP27, Indigenous women leaders raise up their voices demanding an end to all violence, disappearances, and murders of Indigenous women, children, and gender non-conforming people all over the world." 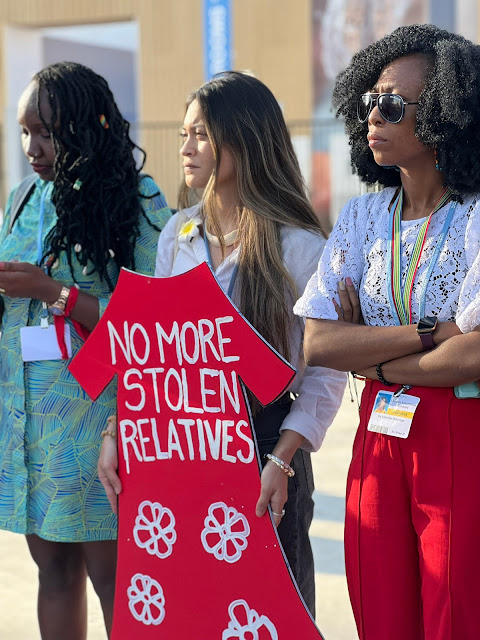 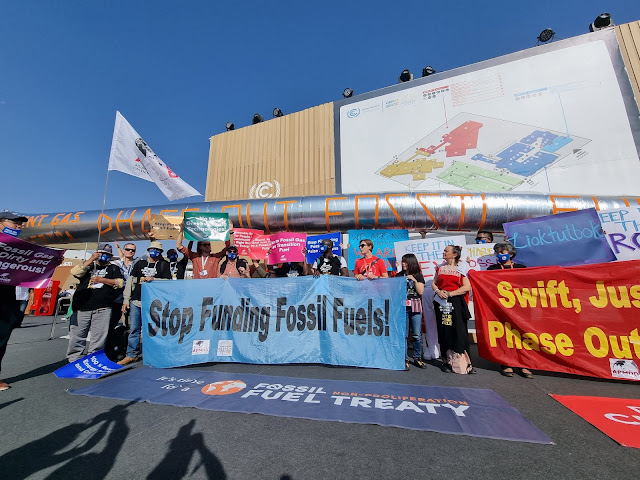 Photo APMDD
Demanding that fossil fuels be phased out, the Asian Peoples Movement at COP27 in Egypt said, "We are the Asian Peoples' Movement on Debt and Development. We are part of global networks fighting for Climate Justice and Tax Justice."
Read more on greenwashing at COP27
The United States announced more of its bizarre 'green climate solutions,' including partnering with Amazon's Bezos, and hopes of partnering with Pepsi.
https://eg.usembassy.gov/u-s-government-and-foundations-announce-new-public-private-effort-to-unlock-finance-to-accelerate-the-energy-transition/
at November 15, 2022